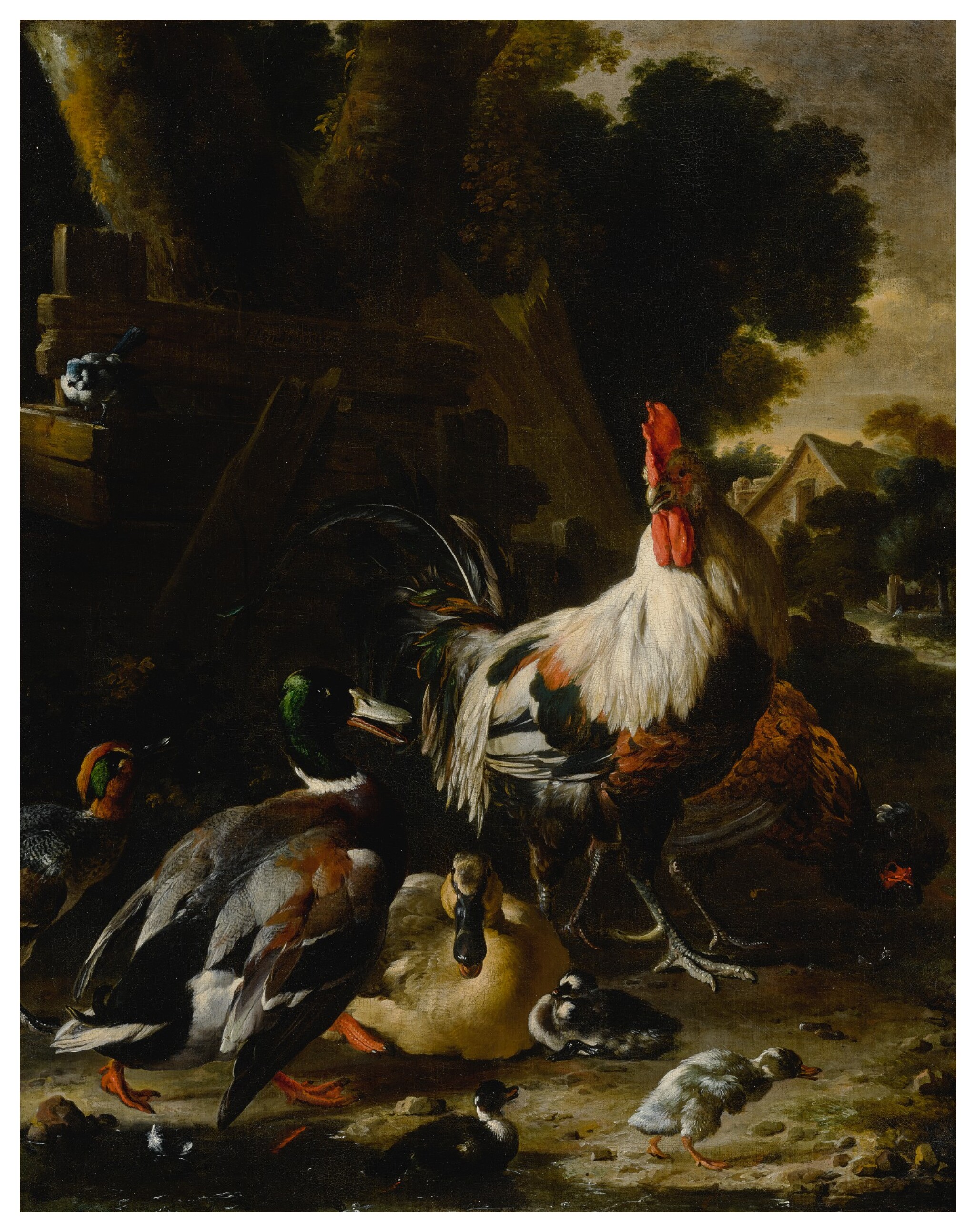 The canvas has an old glue relining. Overall it is stable except for one small area upper right, at the top of the house in the background, where the original canvas and paint layer has been pushed forward and broken, though there hasn't been paint loss. It appears as two perpendicular, thin line breaks about 5 cm wide and 2 cm high. Otherwise the paint layer has been very nicely preserved, with the bold colors and brushwork retained throughout. Some of the middle browns in the background have thinned slightly but this is not particularly bothersome. The canvas is covered in an even, glossy varnish and has only a very subtle craqueleure pattern. Under ultraviolet light the varnish appears more uneven and some scattered retouching is visible in the darkest areas of the painting, though very few if any of these are in the central components of the composition. Once the small break in the canvas is restored the painting will be ready to hang as is. Offered in a carved giltwood frame.

Melchior d'Hondecoeter was trained by his father Gijsbert and his uncle Jan Baptist Weenix. From them he took up the tradition of farmyard and park scenes and brought it to a hitherto unknown level of technical perfection and elegance. Although he began his career in The Hague, Hondecoeter's magnificent paintings of live birds such as this all date from after he had married and settled in Amsterdam in 1663. Here he was able to supply large paintings for the decoration of the town houses and country mansions of the rich burger class, whose taste for the exotic had been whetted by the opening of the famous Menagerie in the Kloveniersburgwal in 1675. The Swedish architect Nicodemus Tessin the Younger (1654-1728), visiting Amsterdam, summed it up thus; 'D'Hondecoeter is the best painter for birds and the like, a civilised man, although young in years, who also showed me some very artful things. He has a very loose manner of painting which yet remains wonderfully true to life when seen from a distance. He always tries to paint animals which have the most singular colours...he paints all kinds of animals well, but birds the best'.1

﻿Much of Hondecoeter's style was indebted to that of the great Flemish animal painter Frans Snyders, whose idiom and themes he embellished to suit the tastes of the wealthy patrican classes in Amsterdam. Hondecoeter's birds are painted on the scale of life and in true relation to each other, freely combining both familiar avians and more exotic species, one of the main reasons for their immediacy and decorative impact. The other is the extraordinary characterization and liveliness that Hondecoeter brought to his assembled feathered casts, as they act out their dramas in their garden settings. Here we see a rather proud rooster startling a mallard who appears to be backing off, both with their beaks open as if in conversation. The female duck, however, remains seated as the ducklings scurry about, seemingly unaware of the rooster's large presence.

Though unpublished, the popularity of this composition is evidenced by the number of copies which have appeared on the market, including one sold at Sotheby's Amsterdam, 14 March 2007, lot 1, and one at Christie's London, 15 April 1992, lot 107.