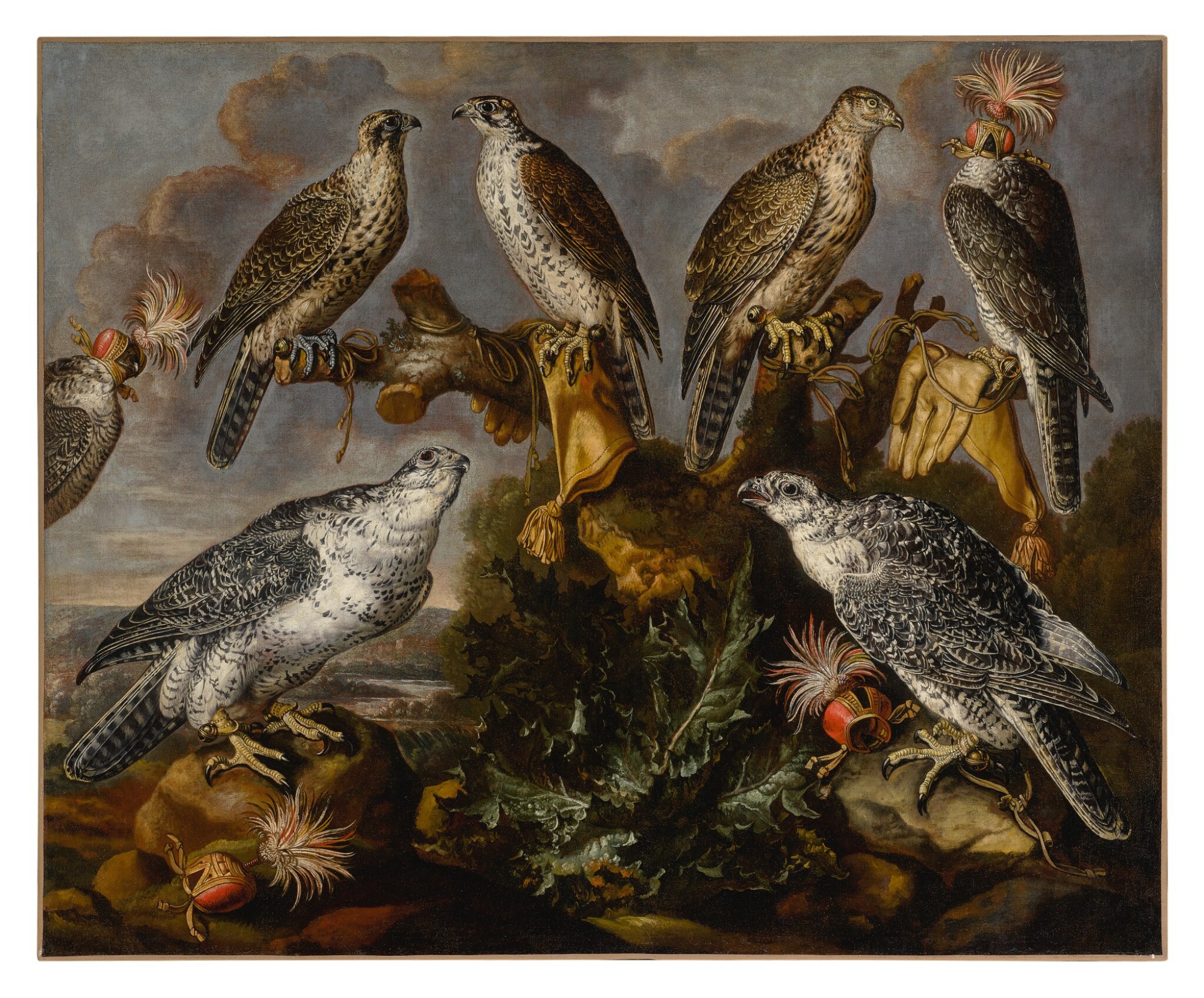 This painting has been relined, is clean, restored and ready to hang as is. Overall the painting presents itself very well, and is impressive, with good detail throughout, in the birds and in the hunting paraphernalia. The grey/blue pigment in the sky is thinly painted on a light brown ground, which is perceptible in some parts of the composition. Under uv, most of the scattered restorations are applied in the sky, to address the thin application of paint and ground there. These are carefully and skillfully applied. The birds and other elements are intact overall, with some small touches locally; there are a few small touches in the white feathers of the bird lower left. There is small restored damage in the sky to the right of the hooded falcon at the left edge, and other touches here and there.

This imposing yet minutely rendered portrait of a group of falcons was painted by Carstian Luyckx, one of Antwerp's most accomplished 17th century still-life painters. Despite his distinctive style and technique, relatively little remains known of Luyckx's life. He trained under Philips de Marlier and Frans Francken III, and he is documented in Antwerp up until 1653, having been made a master in the Guild of Saint Luke in 1645. As some of his later paintings have French inscriptions it is presumed that after this time he may have traveled south, though as yet there is no documentary evidence to support this.  As there are only two known dated pictures by him, it is difficult to establish a chronology for his oeuvre.

The sport of falconry, practiced since ancient times, was a pursuit particularly enjoyed at medieval and renaissance courts. The gyrfalcon, one of two falcon species shown here, is the largest of the falcon species, and Luyckx has taken the liberty to show the majestic animal in multiple poses and from various angles, both with and without their decorated leather hoods. In these detailed and beautifully rendered likenesses, Luyckx's prowess is on full display, particularly in the way he balances light and texture to capture the varied intricacies and colors of the plumage. A similar degree of accuracy and impeccable detail is found in Luyckx's portrait of a colorful parrot in a still life of circa 1660.1  Even similar comparisons can be found in a profile portrait of a single brown gyr falcon, executed with comparable refinement and with a dark landscape beyond, sold New York, Sotheby's, 25 June 2020, lot 105 for $100,000, as well as a pair of works featuring nearly identical falcons sold from the Jacques and Galila Hollander collection in Paris, Christies, 16 October 2013, lot 102.