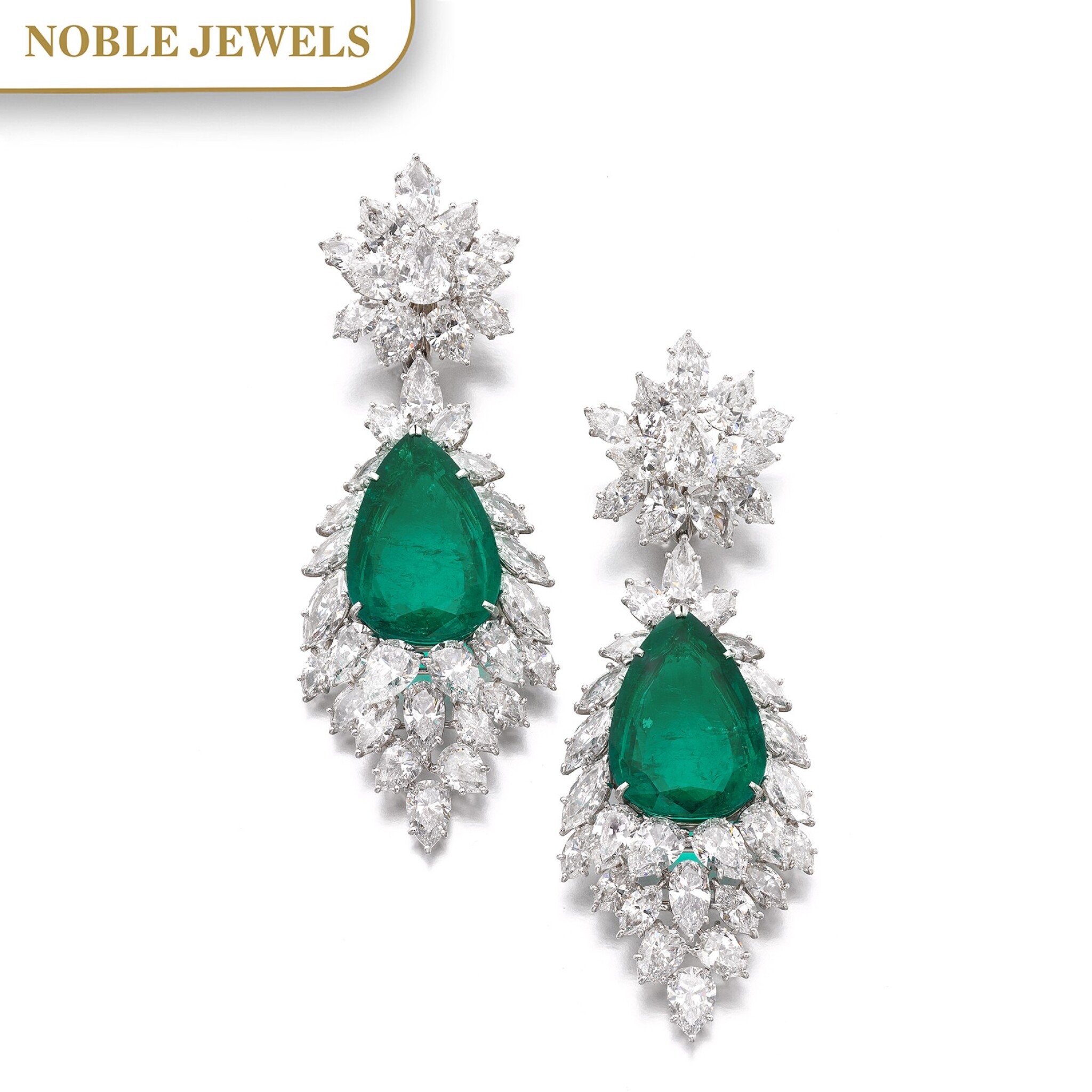 Accompanied by SSEF report no. 116037, stating that the emeralds are of Colombian origin, with a moderate amount of oil in fissures.

Accompanied by SSEF report no. 116037, stating that the pear-shaped emeralds weighing 21.20 and 20.20 carats, measuring 23.65 x 17.30 x 8.63mm and 23.88 x 17.03 x 8.26mm respectively, are of Colombian origin, with a moderate amount of oil in fissures. Unsigned, each clip numbered 7896, maker's mark for Jacques Timey, stamped 950PT for platinum. Emeralds green of medium strong saturation, with visible surface-reaching inclusions, a few cavities around the girdle, nicks and scratches. For further details about the emeralds, please refer to the gemmological report. Diamonds estimated to weigh a total of approximately 35.00 - 38.00 carats, on average F-G colour, VS-SI clarity, as gauged and graded in the mount. Scratches consistent with age and wear. In good condition. Gross weight approximately 55 grams.

‘Talk to me Harry Winston, tell me all about it!’

Marilyn Monroe sang in Gentlemen Prefer Blondes, which premiered in 1953.

Born in New York City, Harry Winston (1896 – 1978) demonstrated from an early age his great accuracy in evaluating precious gemstones. A young Harry spotted a tray of costume jewellery in a pawn shop window, with a sign ‘TAKE YOUR PICK, 25¢’. He selected what the pawnshop owner regarded as a piece of green glass. Taking the item back to his father’s small jewellery business, it was discovered that the ‘glass’ was in fact a two-carat emerald which his father sold two days later for $800. Harry Winston once wrote ‘By the time I was thirteen or fourteen, my judgement of the quality of a gem was so sure, so instinctive, that my father counted on me to advise him.’ In 1947, Harry Winston was crowned ‘King of Diamonds’ by Cosmopolitan Magazine due to his irreproachable sense of beauty and uniqueness in sourcing and fashioning gemstones. It is believed that Harry Winston owned more than one-third of the world’s most famous diamonds, including the Hope and Oppenheimer diamonds. The jeweller was also renowned for creating a revolution in jewellery manufacturing and design. The Harry Winston business first started to prosper in the 1920s when the Victorian and Edwardian fashion was in full decline. Harry Winston purchased outdated pieces at a fraction of their cost and had the gemstones unmounted and recut in order to enhance their sparkle and brilliance and produced contemporary mounts to attract the attention of the ‘Modernists’ of the Roaring Twenties.

‘Soon jewellers became interested in my talent and were furthering my education. Each gem they showed me was like a friend, unique and unforgettable.'

Whilst Winston admired the interesting designs from the Art Deco period, he wanted his settings to enhance the beauty of the gemstones themselves. He wanted to give his jewellery ‘more life’. His inspiration came from a holly leaf wreath that was hanging on his front door one Christmas in the early 1940s. He realised that it was the profusion of holly leaves that made up the wreath, and nothing else, and he wondered if he could do the same with his settings, in other words, just see the stone and not the prongs or settings. Nevdon Koumrouyan, head of design at Harry Winston, helped bring the brand’s iconic design to life, which came to be known as the Winston Cluster.

The level of Harry Winston’s respect for every gemstone is honourable. It was as if he personalised each gemstone that he encountered. In fact, he referred to gems as his friends. His fascinating story and life revolve around the trust that he gained from his clientele and the true beauty of the gemstones that he would sell them. He would experience a great sense of loss when he sold one of his favourite gemstones. Life Magazine once wrote that Winston was a ‘reverent connoisseur with such deep love for fine stones that the sale of a top-quality diamond often suffuses him with a gentle melancholy for days.’

The beautiful jewels offered in this Magnificent Jewels and Noble Jewels sale are some of Harry Winston’s most iconic designs, and indeed carry on his legacy.