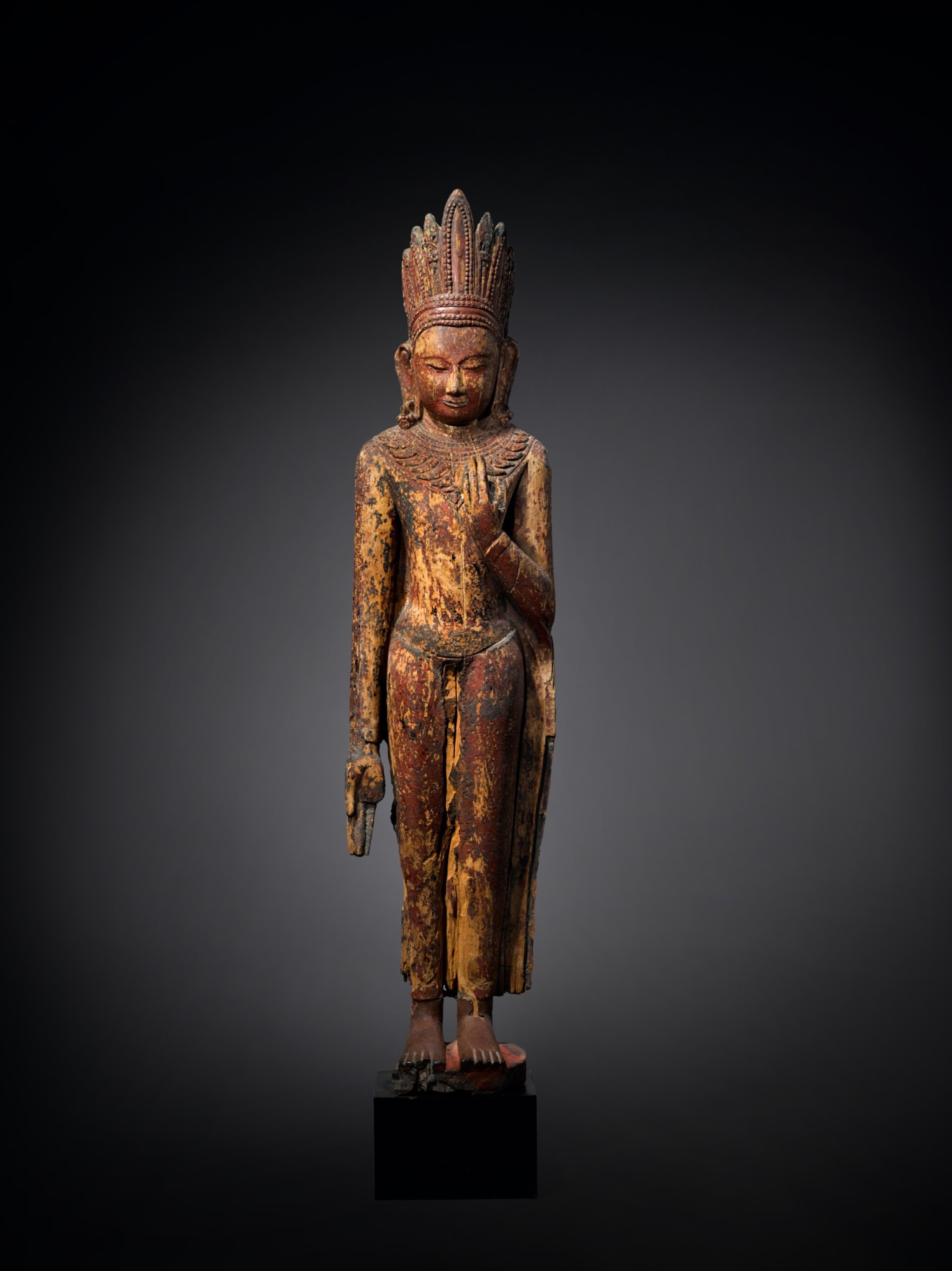 A Monumental Lacquered and Polychrome Wood Figure of Buddha

The standing polychromed and lacquered wooden sculpture of the Buddha with his upper garment or sanghati draped over both shoulders, one end gathered in his proper left hand held at the chest, the other pendent by his side with the palm displaying varada mudra or the gesture of benevolence. The Buddha’s face with downcast eyes and slightly smiling lips radiates serenity. He is adorned in an elaborate suite of jewelry which includes a tall, lobed crown, earrings, and a large beaded and embellished pectoral.

Buddhism was likely established in Myanmar around the middle of the first millennium, brought there by monks and traders from India. During this period Lower Myanmar was under the Mon people, while Upper Myanmar was ruled by the Pyu. At the beginning of the second millennium these two major ethnic groups were overrun by Bamar-speaking peoples who, under the leadership of King Anawrahta, unified the two regions and established their capital overlooking the Irrawaddy River at Pagan in the eleventh century.

In this ethnically diverse and cosmopolitan hub, guided by the precepts of Theravada Buddhism and enriched by territorial expansion and trade, a frenzied building program was undertaken which resulted in the construction of over two thousand brick temples, stupas, and monasteries. Ornamented by painters, sculptors and architects with murals and images in stone, stucco and wood, the art of Pagan forged a unique and distinctive aesthetic which created the basis for succeeding styles of Burmese art.

Owing to historical and environmental factors very few extant images in wood such as the present sculpture have survived. Such large scale images, likely inset into niches in door panels, were an integral part of the ambitious architectural program at Pagan. See Theodore Bowie (ed), The Sculpture of Thailand, Asia Society, 1972, cat 79, pp. 126-127 for a pair of slightly-later, seventeenth century door panels from Thailand with similarly tall inset wooden figures of guardians. The short-necked yet sinuous, elongated form with crisp, elegant lines was a hallmark of the mature Pagan style and is echoed in a late-thirteenth century mural painting depicting a dvarapala in the Thambula temple, see Paul Strachan, Pagan: Art and Architecture of Old Burma, Arran, 1989, no. 139, p. 134. A strikingly similar sculpture of the Buddha, also in wood and from the same period, is in the collections of the Metropolitan Museum of Art, accession no. 1992.382.

The convention of depicting the Buddha as a Chakravartin or Universal Monarch, clad in humble monk’s robes yet anointed with precious ornaments and crown, is very likely connected to the trikaya doctrine of Mahayana Buddhism. Such images are first encountered in eastern India in the eleventh century from where the idea was undoubtedly transmitted to neighboring realms. This idea, which is explained by Professor Otto Karow in O. Karow, Burmese Buddhist Sculpture: The Johan Möger Collection, Bangkok, 1991, p. 2, posits that the combination of royal regalia worn over the bhikshu (monk’s) attire, unites the manifest form (nirmankaya) of the historical Buddha with his elevated form (sambhogakaya) which may only be spiritually experienced or enjoyed but is hard to visually represent. This hybrid concept and image of the Chakravartin went on to serve as the basis for the cult of the God King or Devaraja on which successive dynasties of rulers in Southeast Asia fashioned their reign.