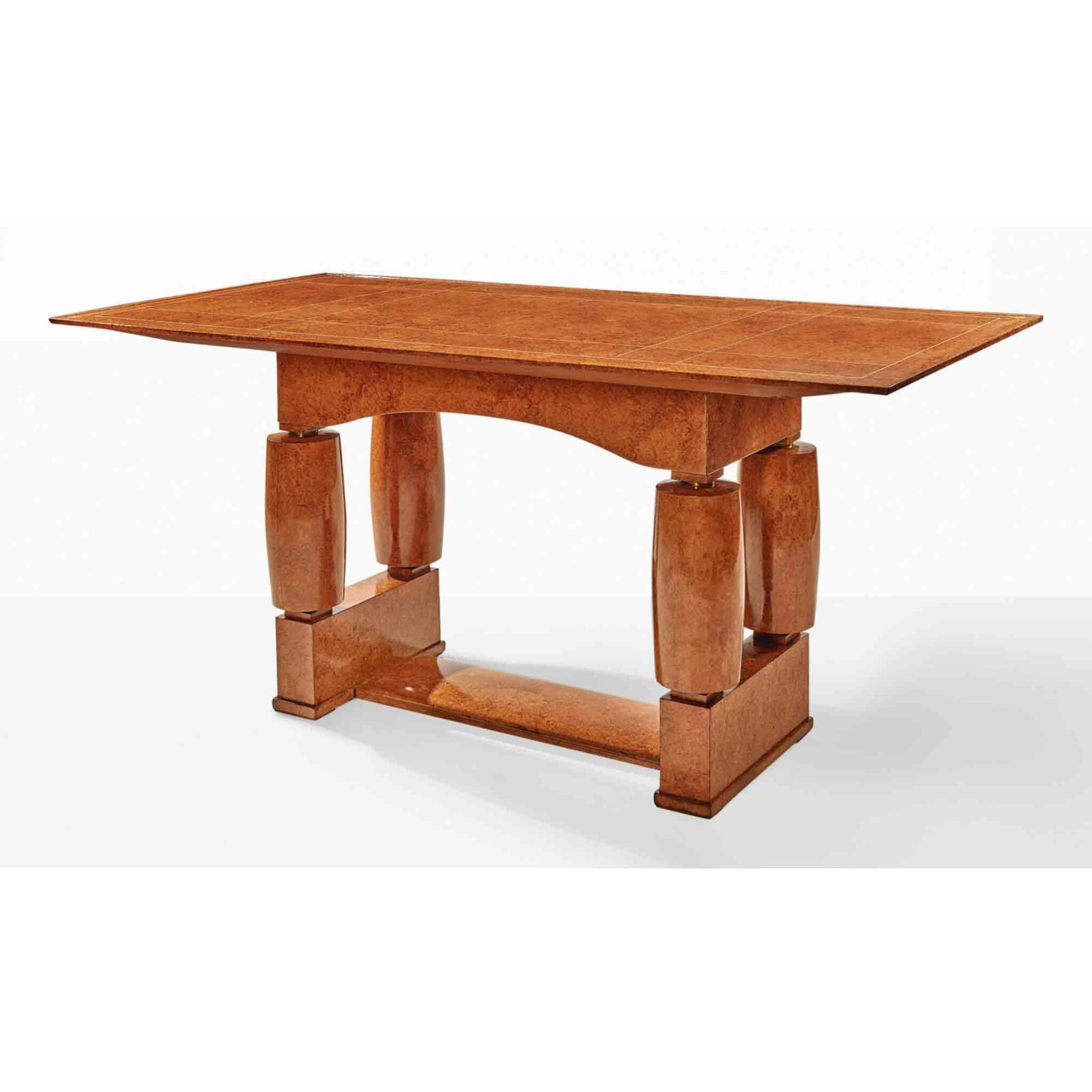 Overall in very good condition. A unique piece that embodies Ruhlmann's extraordinary craftsmanship and artistry, the "Lorcia'' table presents with an incredibly well-preserved structure overall. The amboyna veneer has recently been sensitively refinished by a professional conservator and presents with some light surface scratches, light abrasions and very minor edge wear consistent with age and gentle use. The amboyna veneer with extremely minute and scattered hairline cracks concentrated to the outer edges of the table top, consistent with use and the natural aging process of the wood. The wooden surfaces present with occasional minor areas of sensitively executed restorations and inpainting, which are mostly located to the edges and corners of the piece (not visually distracting). The underside of the table top presents with two hairline cracks located at the extremity on each side, likely the result of use over time; they are presently stable and minor but could benefit from professional conservation at the client's discretion. The ivory inlays on the tabletop have recently been sensitively replaced with ivorine by a professional conservator, in a manner that is identical to the original work. The gilt bronze elements are intact and present with very light oxidation consistent with age. The present lot is offered together with a later protective glass top with felt pads. A stunning, elegant design by Ruhlmann displaying superb proportions and lines and an exceptionally rich wood selection.

﻿﻿ In response to your inquiry, we are pleased to provide you with a general report of the condition of the property described above. Since we are not professional conservators or restorers, we urge you to consult with a restorer or conservator of your choice who will be better able to provide a detailed, professional report. Prospective buyers should inspect each lot to satisfy themselves as to condition and must understand that any statement made by Sotheby's is merely a subjective qualified opinion.

A masterful example of Ruhlmann’s use of a rich amboyna veneer, the “Lorcia” table is distinguished by its unique character and flawless provenance. This unique piece was designed for and subsequently named after the French actress Gabrielle Lorcia for her Parisian home. Lorcia figured among some of Ruhlmann’s most high-profile clients, which also comprised public figures such as actress Jane Renouardt, couturier Jacques Doucet, novelist Roger Martin du Gard and the Maharajah of Indore. Ruhlmann’s commission process is well documented through the designer’s extensive archives and invoices, providing us with detailed information on the designer’s working methods.

Little information is known about the Gabrielle Lorcia commission. Based on a period photograph of the present lot in the home of the actress, one can spot in the background what would appear to be a pair of 'Guindé' armchairs (model no. 80AR/153NR, designed circa 1920), indicating that the present table may have been part of a larger commission. This would not have been unusual for Ruhlmann who very much approached his commissions and curated interiors as Gesamtkunstwerks, total works of art. In any case, the present piece undoubtedly constitutes the most important piece created for Lorcia, as further evidenced by its placement at the very center of the room. This is the first and only version of this model known to exist, and is a modernist take on an earlier table form, the “Reuter” console designed circa 1923.

Ruhlmann himself called this design an “homage to Nicolas Ledoux,” the neoclassical French architect active in the 17th century whose œuvre is characterized by both academic rigor and utopian fantasy. Indeed, one can discern the influence of the revered architect in the treatment of the table as an architectural form in and of itself, where columns support an arched apron and elegant inlaid tabletop. The base complements its upper structure with straight and orderly lines, providing a solid foundation for this form otherwise marked by arches and curves. Modernist and sleek in form, the table elegantly combines luxurious materials and provides a superb example of Ruhlmann’s genius in creating sculptural furniture.