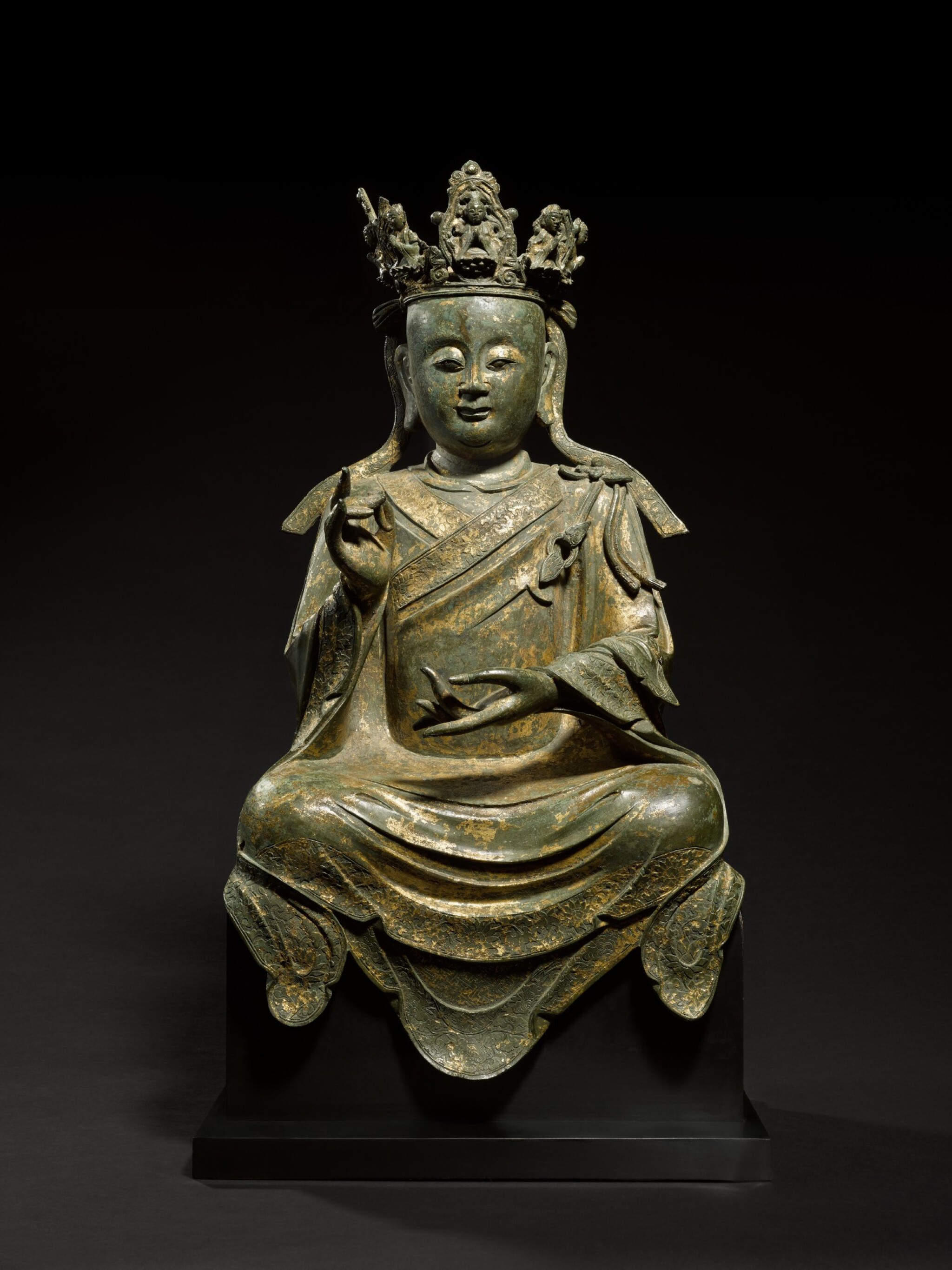 An impressive and rare large lacquer-gilt bronze figure of Avalokitesvara

well cast, serenely seated in dhyanasana with both hands raised in an animated gesture, dressed in a long robe with hems decorated with floral scrolls falling in voluminous folds over the legs, tied at the waist with a double-knot, the well-defined face with a gentle smile, the hair gathered into a high-chignon, framed by an elaborate headdress in openwork centred by the Amitabha Buddha

The dating of this lot is consistent with the result of a thermoluminescence test, Oxford Authentication Ltd, no. C121g41.

Some general wear to the surface and small chips to the edges overall. A ca. 9 cm wide casting flaw/hole to the upper left side on the back of the figure, along with two cracks to the right side. The right knee also has two small casting flaw/holes (ca. 1 and 0.3 cm). A few parts along the edges of the crown are missing as is the attribute in the figure's right hand.

This splendid gilt-bronze Buddhist sculpture shows the bodhisattva Avalokitesvara in a very unusual representation, with no closely related piece appearing to have been recorded. Modestly dressed in a garment, which covers most of his body, and without any jewellery except for the crown, which indicates his identity as the earthly manifestation of Amitabha Buddha, this bodhisattva Avalokitesvara is noticeably different from many of its counterparts. Although his broad and flat face is essentially consistent in its general style with other late Ming figures, his wide-open eyes are distinctive, when compared to the more commonly found downcast expression. Avalokitesvara figures of the time typically reveal their bare chests and feet and wear elaborate jewellery such as earrings and necklaces: see, for example, a more heavily ornamented figure attributed to the 16th or 17th century, seated in dhyanasana on a lotus pedestal but shown with his upturned feet, in the collection of the Chang Foundation, illustrated in James Spencer, Buddhist Images in Gilt Metal, Taipei, 1993, pl. 39.

Avalokitesvara, ‘Guanyin’ in Chinese, is one of the most beloved bodhisattvas in China. The Buddhist scripture Lotus Sutra, first translated in Chinese in AD 286, describes the bodhisattva as the lord who compassionately provides release and deliverance to all those that suffer. Since around the Southern and Northern Dynasties (420-589), when Buddhism was embraced by various courts, gilt-bronze images of Avalokitesvara became popular and continued to be produced in different styles in later centuries. The present piece, with a strap holding the garments as is usually seen holding monks’ robes, and without jewellery, appears to portray the bodhisattva as a male figure, while figures of Avalokitesvara of the 16th and 17th centuries tend to show more feminine features.

Compare two examples with related elements, both seated in dhyanasana and with hands in similar mudras; a slightly larger one attributed to the 16th or 17th century, wearing a similar crown and no jewellery as the present lot, but with a wan symbol on his chest, sold in these rooms, 13th December 1960, lot 119; and a slightly smaller piece, also crowned with a related five-point diadem, but adorned with ornaments hanging down from his ears and neck, sold as part of a pair at Christie’s Hong Kong, 30th October 1994, lot 396.

The dating of the figure is consistent with the result of Oxford Authentication thermoluminescence analysis report no. C121g41.