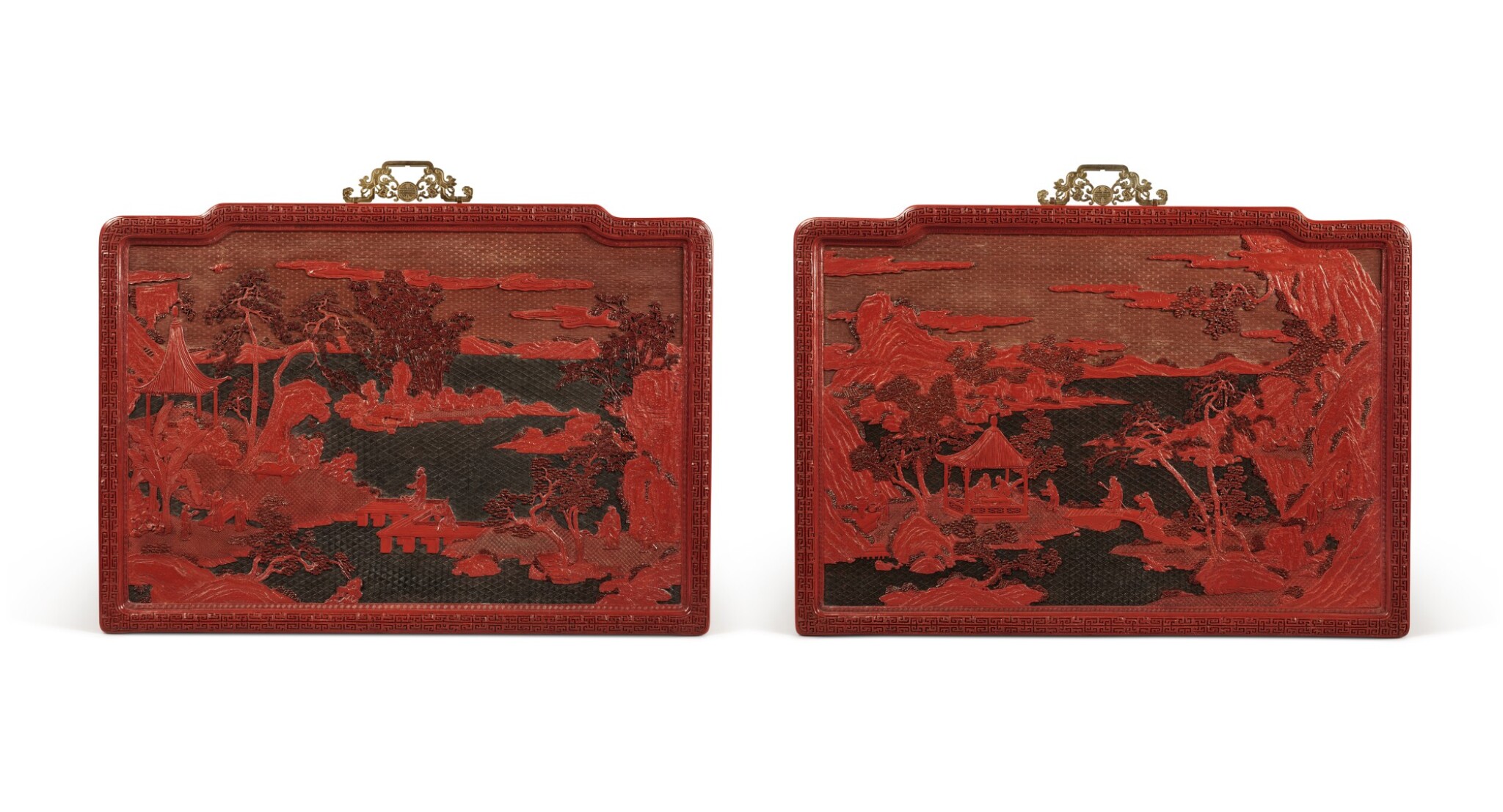 each finely carved in high relief with a mountainous landscape scene in cinnabar, depicting a pavilion in the foreground nestled amongst jagged rocks and pine trees, scholars and attendants engaged in various activities, all against a black wave and an ocher classic scroll diaper ground, all framed by a border of keyfret, each mounted with a metal hanger (2)

The right panel in illustrated photo: in overall good condition. A few areas of infills, touchups, and consolidation.

Under the Qianlong Emperor (r. 1736-95), lacquer arts enjoyed a renaissance following their decline at the end of the Ming dynasty (1368-1644) and the intervening years. At both imperial and private workshops, craftsmen working in this medium achieved new heights in terms of virtuosity and scale of execution. The Qianlong Emperor commissioned numerous panels, often in pairs, to adorn the myriad halls built under his direction. Even by his demanding standards, the present pair of panels is exceptional in its exquisite details and painterly qualities. The technical complexity, large format, and sumptuous materials of this pair of panels suggest that they would have been made for an imperial palace.

Some carved polychrome lacquer panels of this size and period bear images specifically associated with the Qianlong Emperor, such as an inscribed panel commemorating the triumphant campaigns of General Agui (1717-1797), who spent 1771-76 in the Sichuan mountains quelling peasant rebellions on behalf of the Emperor. A panel from this group is published in Derek Clifford, Chinese Carved Lacquer, London, 1992, pl. 99, and sold at Christie’s New York, 21st March 2000, lot 70, and later again in their London rooms, 12th November 2002, lot 41. A number of other carved polychrome lacquer panels of the same subject survive, including one from the collection of the Earl of Iveagh which sold at Christie's London, 23rd May 1984, lot 2537; and one which sold in our London rooms, 2nd November 1984, lot 231. The Qianlong Emperor’s naval campaigns for the pacification of Taiwan (1786-88) were also commemorated in engravings and in corresponding inlaid carved lacquer panels. See, for example, a panel that sold at Christie’s London, 12th July 2005, lot 148.

Beyond military subjects, Qianlong-era carved lacquer wall panels also depict landscape scenes, for instance, a pair of carved cinnabar lacquer panels sold at Christie’s New York, 19th September 2006, lot 68, and another illustrated in Edward F. Strange, Chinese Lacquer, New York, 1926, pl. 26; literary scenes, including a pair of panels with images drawn from the Ming dynasty novel Fengshen yanyi [Creation of the Gods] was offered in our Hong Kong rooms, 23rd October 2005, lot 387; scenes of cultural importance such as Wang Xizhi’s (303-361) penning of the Lanting xu [Orchid Pavilion Preface], as seen on a panel sold in our Hong Kong rooms, 23rd October 2005, lot 364, and on a lacquer screen in the collection of the Palace Museum, Beijing, illustrated in Gugong bowuyuan cang wenwu zhenpin quanji: Ming Qing jiaju / The Complete Collection of Treasures of the Palace Museum: Furniture of the Ming and Qing Dynasties, vol. II, Hong Kong, 2002, p. 209, pl. 181. Compare a related panel in a similar style depicting enlightened luohan and accompanied by an imperial poem, from the collection of Lieutenant Colonel Arthur Bowdich Cottell, sold in our London rooms, 4th November 2009, lot 123; and the pair to that panel, from an old Austrian collection (by repute), that sold in our Hong Kong rooms, 3rd April 2018, lot 3626.