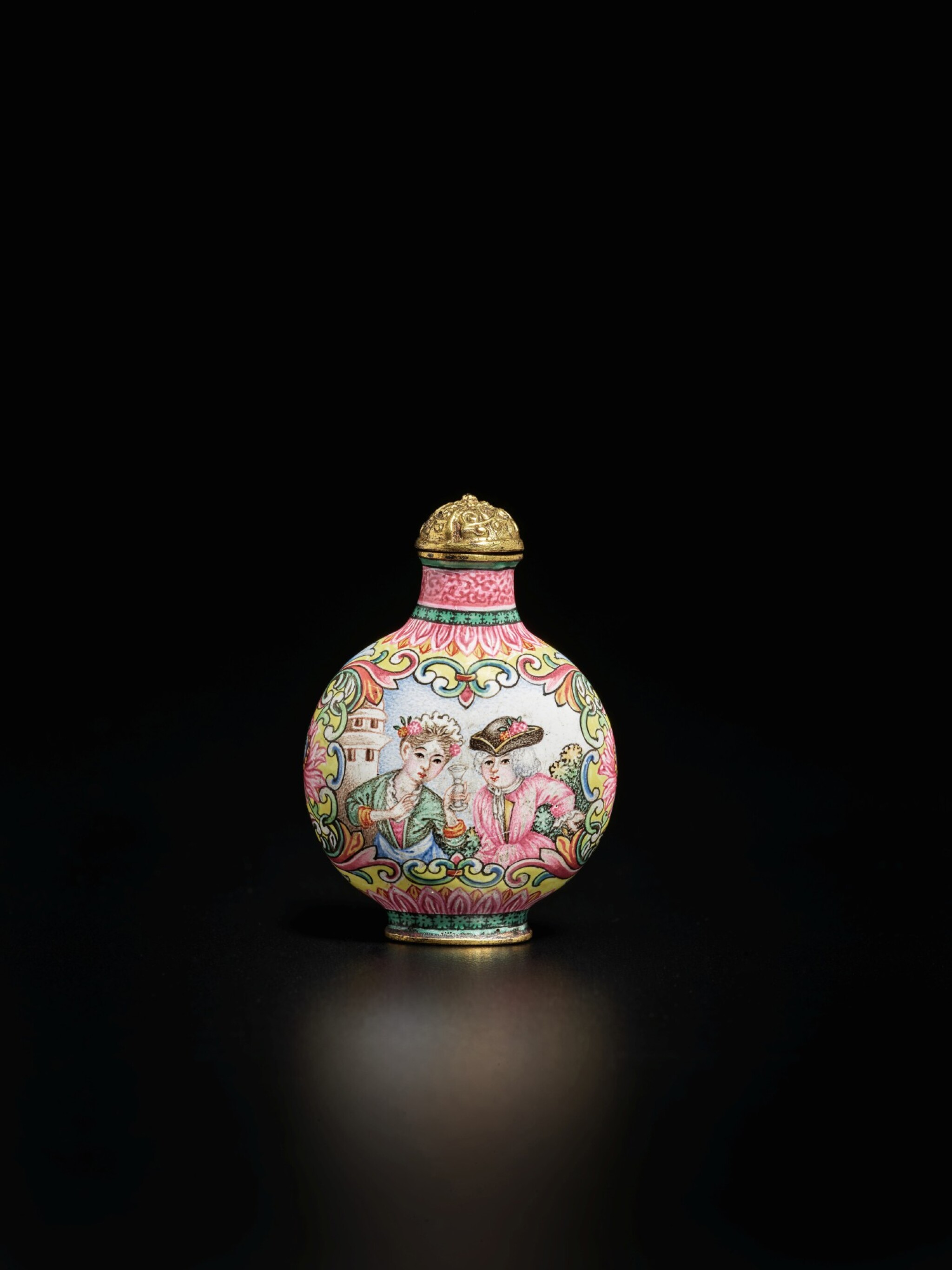 of flask form, finely painted overall in famille-rose enamels, one side with a couple admiring a white porcelain gu-form vase in a garden, the woman holding the vase wearing a colorful dress and with flowers pinned in her coiffure, the gentleman dressed in a pink and yellow overcoat and a black trefoil hat over a white wig, verdant bushes and a European castle in the background, the reverse side with a male attendant dressed in a blue jacket and white wig presenting a large peach to a woman, greenery and a European tower in the background, a large pink peony blossom on each of the narrow sides dividing the pictorial cartouches, all framed by scrollwork against a vibrant yellow ground, the foot and neck each with bands of rosettes and petal lappets, the base with a four-character mark in blue enamel against a white ground, the gilt-metal stopper cast with floral scroll in relief (2)

The bottle and stopper are in good condition, with only very minor expected wear to the gilt.

This finely enameled snuff bottle is an exquisite miniature work of art created by the Palace Workshops in Beijing, which masterfully unites traditional Chinese motifs with European subjects and techniques, and encapsulates the immense interest in foreign taste during the Qianlong period (1736-95). The European attendant is offering the lady a peach, a Chinese symbol of longevity, while the other lady is holding a porcelain vase modeled after a Chinese archaistic vessel, known as a gu.

Starting with the Kangxi Emperor (r. 1662-1722), the emperors of the Qing dynasty (1644-1911) developed a fascination with European culture and style. Jesuit missionaries, who had been in China since the late 16th century, exerted a significant influence on the arts and scholarship at the Qing Court. Jesuit artists, such as the famous Giuseppe Castiglione (1688-1766), worked alongside their Chinese counterparts in the Palace Workshops and introduced European ideas and technologies to China, including the technique of painted enamel, as seen on this snuff bottle. Such cultural exchange inspired a completely fresh approach to decorated porcelains, metals and glass, which continued to develop during the subsequent Yongzheng (1723-35) and Qianlong reigns. The present bottle is a superb example of the genre of European subjects in the Qianlong period, as demonstrated by the enameller’s ability to express three-dimensionality and depth on this little container. The fine shading seen on the drapery and the background architecture derive from European painting practices to convey pictorial perspective.

Although snuff bottles of this type are rare, a few Qianlong mark and period examples bearing a similar composition are known. See, for example, one depicting an almost identical woman and companion admiring a gu-form vase, rendered in a similar fashion to the present piece and perhaps painted by the same hand, preserved in the Metropolitan Museum of Art, New York (acc. no. 21.175.314), included in the Museum’s exhibition Small Delights: Chinese Snuff Bottles, New York, 2013-14; another, enameled with a European lady and a boy presenting her with a fruit, with the foot encircled by a band of keyfret, sold at Christie’s New York, 20th September 2005, lot 429; a further snuff bottle, from the Meriem Collection, painted not only with a lady and a boy, but also with buildings in the background and formal floral framing borders executed in a comparable style to the present lot, exhibited in the Canadian Craft Museum, Vancouver, 1992, and sold at Christie’s New York, 19th March 2008, lot 275; and a bottle decorated with a young European couple on one side and three goats on the other, both sides connected by a continuous landscape, included in the exhibition Snuff Bottles of the Ch’ing Dynasty, Hong Kong Museum of Art, Hong Kong, 1978, cat. no. 9, and sold at Christie’s New York, 19th September 2007, lot 666.

While women and children are often depicted on these containers, it is rather unusual to see a man with a hat as shown on the present piece. Compare a similar figure painted on an imperial enamel snuff bottle illustrated in Hugh Moss, Victor Graham and Ka Bo Tsang, The Art of The Chinese Snuff Bottle: The J & J Collection, vol. 1, New York and Tokyo, 1993, pl. 170.