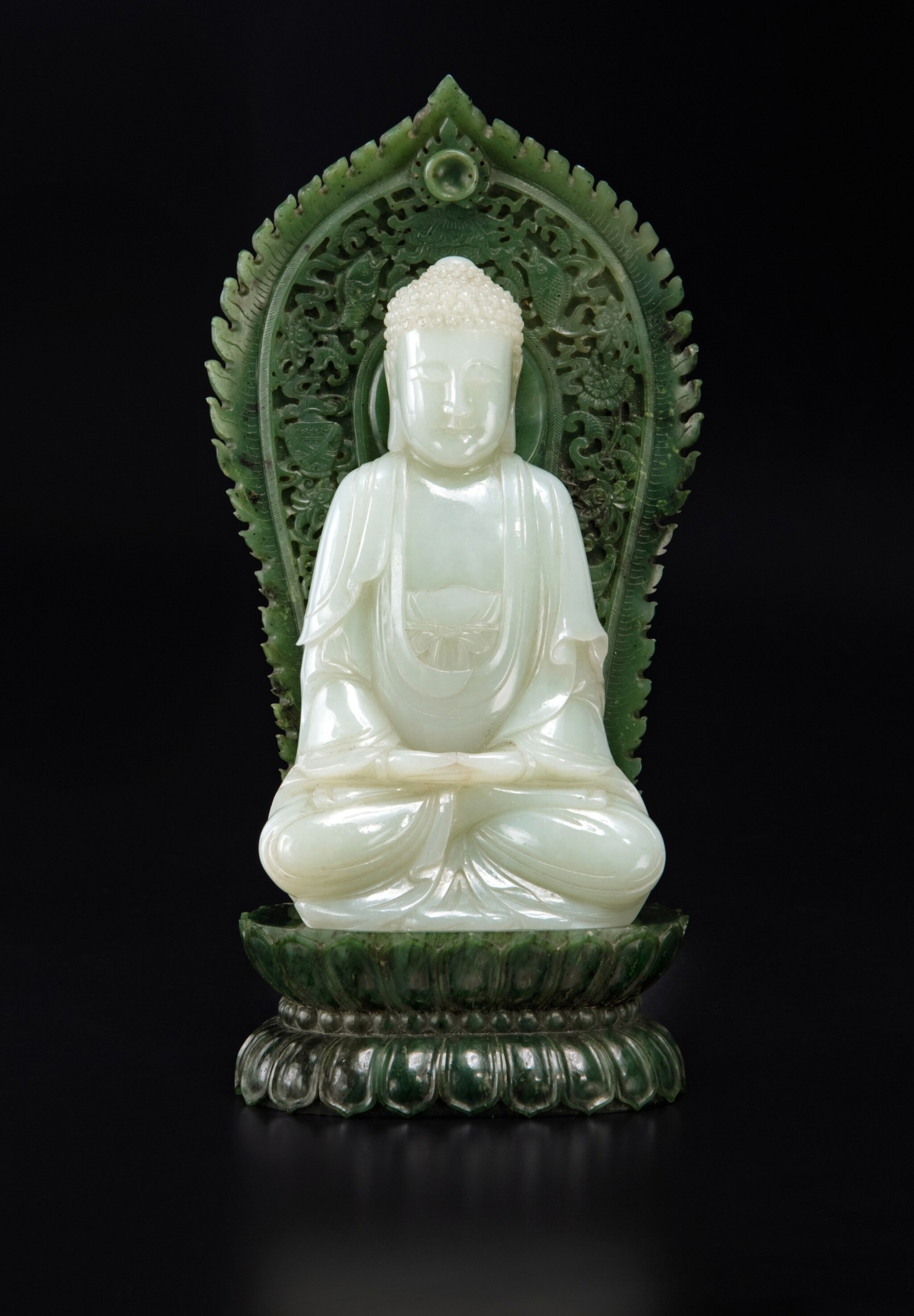 finely carved seated in dhyanasana with hands held in dhyana mudra, wearing a long robe falling in gentle folds over the arms and legs and open at the chest to reveal the dhoti tied beneath, the face directed forward with a serene expression and lowered eyelids, framed by a pair of pendulous earlobes and tightly curled hair, the top of the ushnisha with a smooth surface, the stone a whitish-celadon color contrasting with the emerald hue of the lotus base with a flame-shaped mandorla, the mandorla exquisitely carved with the 'eight auspicious emblems' amongst lotus scrolls all in high relief (2)

In overall good condition, very minute nicks to the surface and edges.

This jade Buddha was skillfully carved during the Qianlong reign (1736-95), when lapidary craftsmanship was at its apex and an abundance of the stone was available. A figure of such fine quality might have been worshipped by an affluent family at a home altar. Devotional images of this type feature peaceful visages to bring attention to the enlightened state of the subject, in order to guide the spiritual practice of the supplicant.

Compare two pale celadon jade figures of the Qing dynasty, both preserved in the Palace Museum, Beijing: a slightly larger one with a copper base and mandorla (acc. no. 故 89509), illustrated in Compendium of Collections in the Palace Museum: Jade, vol. 8: Qing Dynasty, Beijing, 2011, pl. 236; and a smaller one, carved with a face very similar to that of the present piece, but with jeweled chains at the chest and lacking a base and mandorla, illustrated in ibid., pl. 238. See also a white jade figure of the Qianlong period, carved with a base and mandorla from one single boulder and lacking the decoration of the Buddhist emblems, sold in our Hong Kong rooms, 26th October 2003, lot 30.

Dr. Abraham Block (1903-1980) was a respected physician in Queens, New York for over 50 years. He had a private practice, seeing patients in his office and on house calls, and was admired by his patients and colleagues alike. His parents had immigrated to the U.S. from Russia, and despite their limited resources, they realized the importance of proper education and insisted on putting all four children through school. Dr. Block graduated from New York University’s Grossman School of Medicine before completing an internship at Bellevue Hospital in New York City. Outside of his medical practice, he was an avid collector of Chinese art and would frequent Park Bernet to buy jade carvings. At home, he enjoyed sitting next to the curio cabinet filled with his collection while reading medical journals, a pastime which satisfied both his academic and intellectual passions.