Property from a Pennsylvania Private Collection 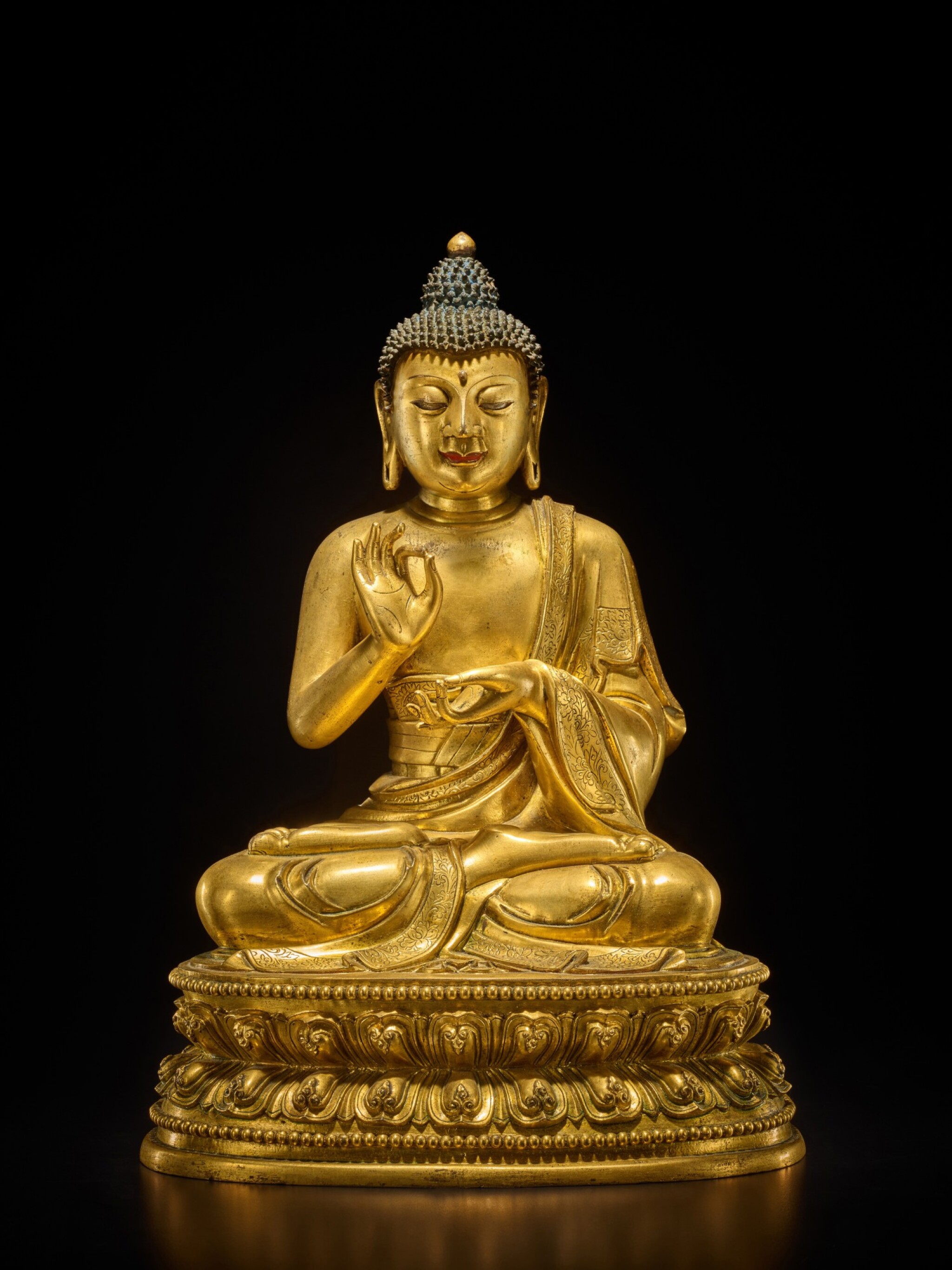 Property from a Pennsylvania Private Collection

the figure seated in dhyanasana on a double-lotus base, the hands in dharmachakra mudra, wearing a brocade-hemmed dhoti and a shawl draped over the left shoulder revealing a bare chest, the serene facial expression accentuated by red, white, and black pigments at the lips, eyes, and eyebrows, pendulous ears at either side of the face, the hair twisted in tight curls covering the scalp and ushnisha, a bud-form ornament atop the ushnisha, traces of blue pigment in the hair, the fragmentary base plate revealing the original sutra scrolls inside

This elegant and serene figure of the Buddha Dipankara reflects the religious beliefs of the Kangxi Emperor (r. 1662-1722) and is evidence of the political importance of Tibetan Buddhism during the early Qing period. The Qing emperors’ support of Tibetan Buddhism had both political and personal benefits by securing a diplomatic alliance with China’s Mongol and Tibetan neighbors while assuring rapid progress to enlightenment through personal devotion to its practices. The Kangxi Emperor left extensive material evidence of his personal devotion to Buddhism, including the constructions of Buddhist monasteries and shrines filled with painted textiles, gilt-bronze sculptures, and other ritual implements. Buddhist gilt-bronzes of this period, such as the present example, were produced by the Qing Imperial workshops and are often are often characterized by a strong Indo-Himalayan aesthetic.

Gilt-bronze sculptures of the Buddha Dipankara are relatively rare. Believed to have lived for 100,000 years, Buddha Dipankara is one of the predecessors of the historical Buddha Gautama, credited with setting the Dharma Wheel in motion, thus marking the beginning of the Buddhist faith. Dipankara’s prophetic abilities are known from a jataka, stories that record events from the Buddha’s past lives, where the ascetic Sumedha, a former incarnation of Buddha Shakyamuni, offered to spread his hair and flowers on the ground for Dipankara to walk on and avoid the mud.

It is significant that the present figure bears stylistic similarities with a famous larger (70 cm high) documentary gilt-bronze figure of Buddha Dipankara preserved in the Museum of Art, Rhode Island School of Design, Providence (acc. no. 1989.110.62) included in the exhibition Tantric Buddhist Art, China Institute in America, New York, 1974, cat. no. 22 and illustrated in Denise Patry Leidy and Donna Strahan, Wisdom Embodied: Chinese Buddhist and Daoist Sculpture in the Metropolitan Museum of Art, New York, 2012, fig. 27. The Rhode Island figure bears inscriptions in Chinese and Tibetan language, both of which attest to the date and place of the sculpture’s commission. Thanks to Jeff Watt’s recent translation of the Tibetan inscription, it can be read as: 'made on an auspicious early autumn day in the dwelling place of monks, the Dachong Jia monastery, in the first year of the great Kangxi emperor' (corresponding to 1662). The Dachong Jia monastery had been constructed during the Ming dynasty and was politically and culturally related to the Dro Tsang Dorje Change monastery in Amdo.