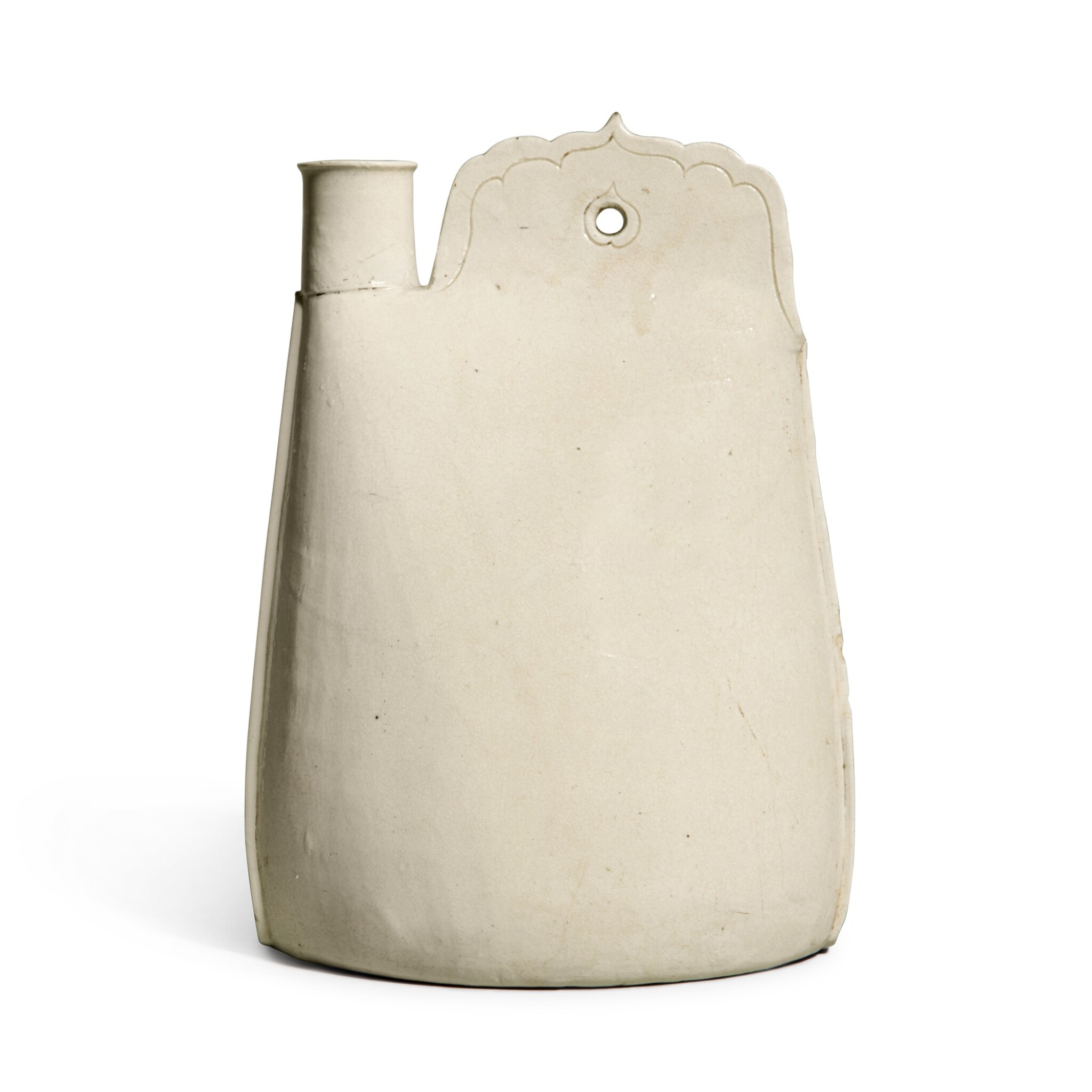 the walls tapering from the circular base to meet in a horizontal seam at the top accented with a bracket-lobed flange flanking the tubular lipped spout, the flange incised around its borders and pierced with a circular aperture, the narrow sides of the flask modeled with thin vertical bands of clay evoking seams or gussets, all under a translucent ivory-tinged glaze, the base unglazed revealing the buff body

In overall good condition with scattered small chips to one thin vertical band on the narrow side. Overall with minor and expected firing imperfections and minor wear to the surface.

Liao pottery and stoneware flasks of this type were modeled after leather flasks used by the Khitans. This example is notable for its angular shape, elaborate barbed handle, pure white glaze, and fine clay. A similar example has been excavated from a Liao royal tomb datable to 959 in Chifeng, Inner Mongolia; see Liu Tao, Song Liao Jin jinian ciqi / Dated Ceramics of the Song, Liao and Jin periods, Beijing, 2004, p. 68, fig. 4-7, and col. pl. 25. Another flask of this design with molded raised borders, was formerly in the Idemitsu Museum of Arts, Tokyo, and sold in our London rooms, 11th May 2011, lot 8, and again at Christie's New York, 21st March 2019, lot 1736.

Compare variations of this vessel, also white-glazed but with simpler bracketed handles. One of similar shape to the present but raised on a splayed foot is illustrated in Ceramics of Liao Dynasty, Formerly the Hayashibara Museum Collection, T. Edo Inouye & Son, Tokyo, 2012, cat. no. 27. See also two examples with rounded sides: the first is illustrated in Mino Yutaka, Hakuji [White Porcelain], vol. 5, Tokyo, 1998, pl. 30, and the second sold in our Hong Kong rooms, 1st-2nd June 2017, lot 422.