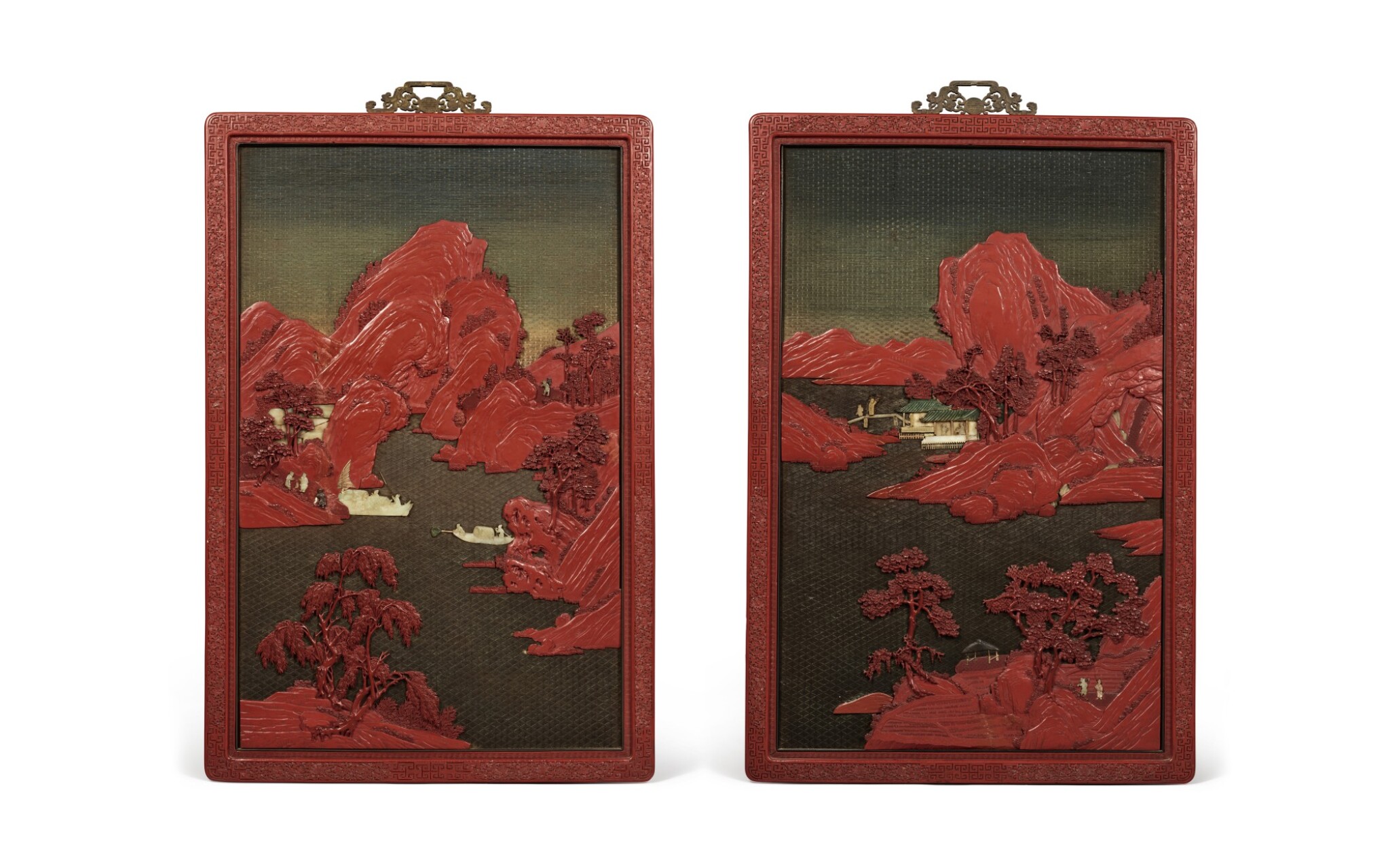 with layers of cinnabar, black, and ochre lacquer finely carved in high relief articulating lake-strewn mountainous landscapes of near and distant tree-lined peaks, the waves and sky carved with intricate diaper patterns, one panel with scholars and attendants among pavilions and bridges all of inset carved jade and hardstone, the other with travelers preparing to embark a moored boat as a second boat approaches also all of inset carved jade and hardstone, each enclosed within a cinnabar lacquer border carved with alternating keyfret and floral scroll sections (2)

Both panels have expected signs of age, including vertical cracks (some have been consolidated), flakes to the lacquer (some have been over-painted), and scattered small losses to the relief. Some of the hardstone embellishments have been re-glued or replaced.

The present pair of panels is a fine example of the extraordinary workmanship achieved by lacquer craftsmen of the Qing period and is particularly notable for its spectacular landscape. Each rock, tree and figure is carefully executed, and close attention is paid to the overall composition. The artisan even followed the custom of Chinese painters to define the foreground, middle distance, and far distance. Rockwork is intricately rendered in layers to create illusion and depth, and the various types of trees bring a sense of abundance and liveliness to the scene. Like other 18th century lacquerwares, the ground is also delicately carved in two different patterns to evoke a sense of contrast and sumptuousness.

Compare a closely related pair of panels attributed to the Qianlong period, executed only in lacquer and of slightly shorter proportions, sold at Christie’s New York, 6th September 2006, lot 68. A Qianlong period panel depicting a scene from Lanting Xu, was first sold in these rooms, 22nd March 1995, lot 423, and again in our Hong Kong rooms, 23rd October 2005, lot 364. Compare a taller panel also depicting Lanting Xu in a similar landscape style in the collection of Palace Museum, Beijing, illustrated in The Complete Collection of Treasures of the Palace Museum - Furniture of the Ming and Qing Dynasties II, Hong Kong, 2002, pl. 181. Another related massive panel (95.2 x 160 cm) was sold at Christie’s London, 16th November 1998, lot 128.

Embellished cinnabar lacquer panels are rare. Compare a large example attributed to the 19th century that was sold in our London rooms, 28th October 1988, lot 151; and another six-panel hardstone-inlaid screen that was sold in these rooms, 17th March 1984, lot 586.