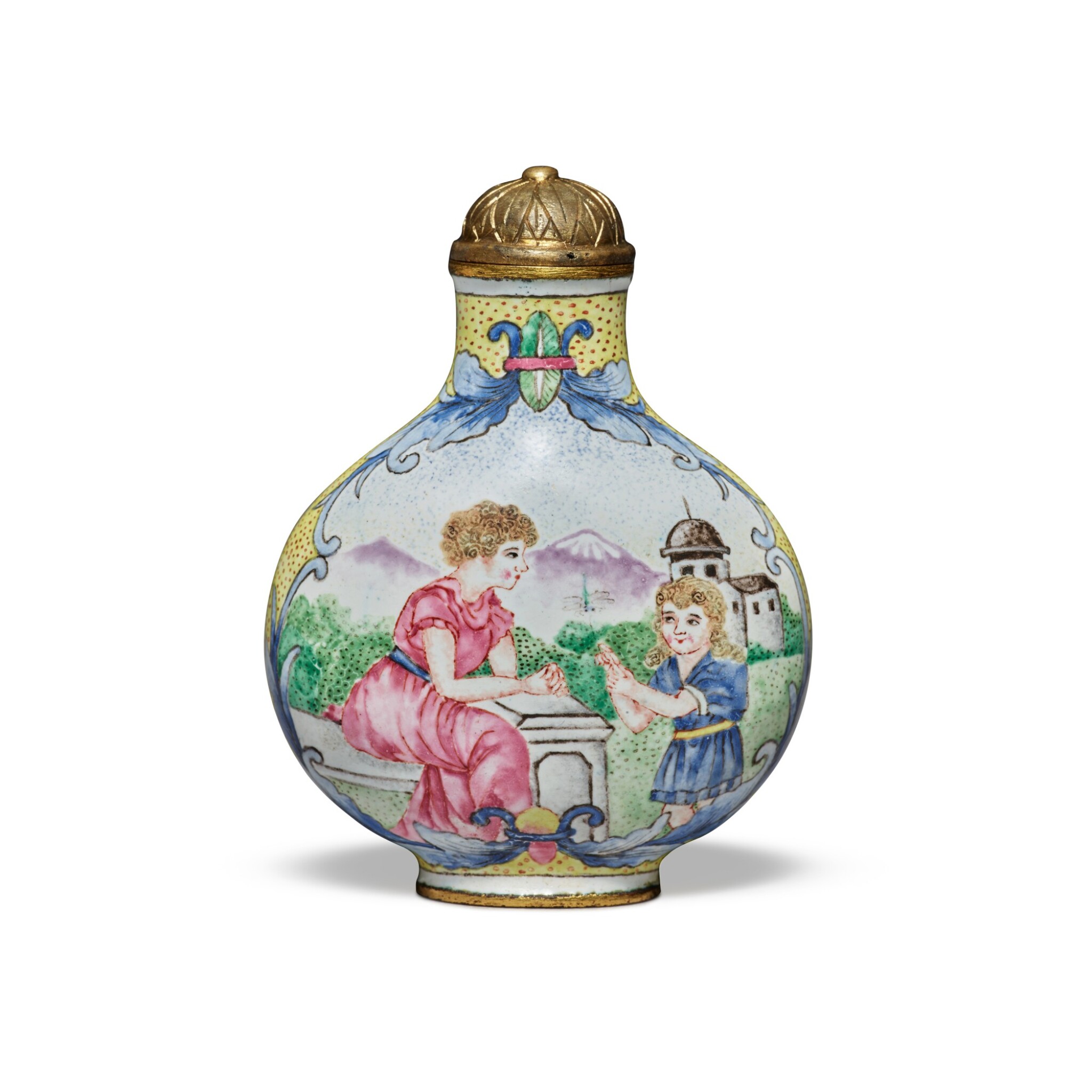 of flattened flask form with a flat rim and a slightly convex base, one of the broad sides painted with a woman in a rose-colored dress sitting on a stone wall looking at a dragonfly hovering between her and a nearby boy dressed in a blue tunic, the boy's eyes fixed on the insect and his hands lifted to capture it, the figures surrounded by a verdant landscape with a European castle and snow-capped purple mountains in the background, the opposite side with a woman in a celadon dress seated on a stone wall extending a pink blossom in her hand to a young girl in pink dress standing below, the background also with a European building and snow-capped purple mountains, each pictorial cartouche surrounded by a blue foliate band, the narrow sides with a pale yellow ground and stippled dots, the white-enameled base painted with a four-character mark in blue, domed gilt-metal stopper (2)

In overall good condition, with only a couple tiny flakes to the enamel along the rim and one minute nick to the yellow enamel at side. Minor expected wear to the gilding.

Finely painted in vivid tones and featuring vignettes of Europeans enjoying each other's company in a setting distinguished by European architecture and distant peaks, the present bottle belongs to a group of Qianlong mark and period snuff bottles sharing these characteristics, likely produced by the same hand or workshop. Several snuff bottles in this group also have a stippled pattern on the narrow sides, including a bottle sold in these rooms, 22nd March 2000, lot 220; another sold in these rooms, 24th June 2020, lot 959; and one from the Tuyet Nguyet and Stephen Markbreiter Collection sold in our Hong Kong rooms, 4th June 2021, lot 1012. Other snuff bottles of this type have a diaper pattern and puce-enameled 'landscape' cartouches on the narrow sides, including a snuff bottle sold in these rooms, 2nd December 1985, lot 146. Canton enamel bottles of this type, but without the mountains, include one sold at Christie's New York, 1st-2nd December 1994, lot 528; another sold at Christie's Hong Kong, 28th April 1996, lot 594; one published in Geng Baochang and Zhao Binhua, Zhongguo biyanhu zhenbao [Snuff Bottles for Connoisseur’s Collection], Hong Kong, 1992, pl. 383; and a similarly painted bottle showing a mother, child, and gift-bearer on the balcony of a European castle, in the collection of the National Palace Museum, Taipei (coll. no. 故-琺-000873-N000000000).