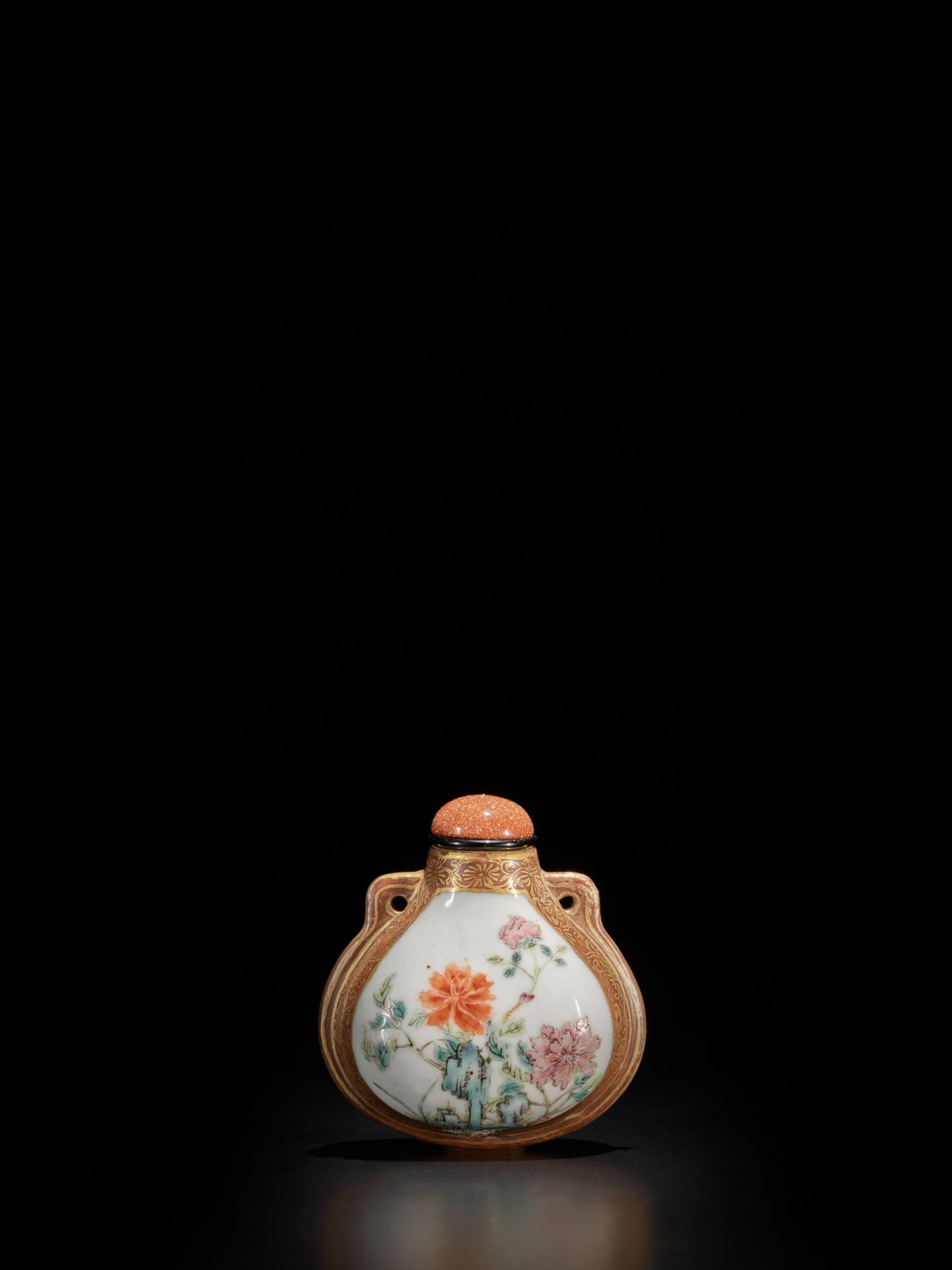 of flattened teardrop shape with broad proportions, one side delicately painted with leafy peony branches bearing resplendent pink and red blooms above rockwork below, the opposite side with a four-verse imperial poem accompanied by the Emperor's name, the date, and two seals, the perimeter of bottle bordered by a raised flange imitating a metal seam and painted along the narrow sides and neck in brown and gilt enamel imitating chased metal, the ends of the flange at the neck pierced for suspension, stopper (2)

There is an approx. 0.7 cm restored flake chip to one handle. Overall with age-consistent minor wear to the gilt.

For more information on and additional videos for this lot,

The inscribed side of the bottle begins with the Emperor's name and the cyclical year bingshen (corresponding to 1776) followed by a four-verse poem all in black enamel, then two seals in red reading san ('three') and Long (the second character of the Emperor's name). The poem is an extract from a set of twelve poems the Qianlong Emperor inscribed on an album of flower paintings by the court artist, Zou Yigui (1686-1772) titled Ti Zou Yigui huahui shier fu. The Emperor composed the poems before February 1794, and they are recorded in Qing Gaozong yuzhi shiwen quanji [Anthology of imperial Qianlong Poems], Leshantang quanji dingben [Definitive Edition of the Complete Works by His Majesty from the Hall of Pleasure in Goodness], juan 28, ye 9. The same poem extract appears on a famille-rose hexagonal brushpot from the Edward T. Chow Collection, sold at Sotheby's Hong Kong, 8th October 2013, lot 3033; and on another brushpot of the same type sold first at Christie's Hong Kong, 2nd October 1991, lot 1711, and later in our Hong Kong rooms, 5th October 2011, lot 2068.

The opposite side of the snuff bottle is painted with blossoming peony among rockwork, and the narrow sides are delicately painted to imitate metalwork in enamel and gilt. The depiction of the flowers and faux-metal border are executed in the same quality and manner as a snuff bottle in the collection of the Palace Museum, Beijing (coll. no. 故00152781), which bears a four-character Qianlong mark on the base, and is published in Gugong biyanhu xuancui / Masterpieces of Snuff Bottles in the Palace Museum, Beijing, 1995, pl. 161. A related snuff bottle also attributed to the late Qianlong period and bearing an imperial poem on one side and similarly-painted flowers on the opposite, but with a polychrome floral border and a four-character Qianlong mark on the base, was sold at Christie's New York, 26th March 2004, lot 104.

The 'purse' shape of the present snuff bottle is also seen in three other snuff bottles attributed to the latter part of the Qianlong-Jiaqing period: a turquoise-glazed bottle published in Hugh Moss, Victor Graham and Ka Bo Tsang, A Treasury of Chinese Snuff Bottles: The Mary and George Bloch Collection, vol. 6, pt. 2, Hong Kong, 2007, no. 1167, and later sold in our Hong Kong rooms, 1st June 2015, lot 206; a blue and white bottle, also from the Bloch Collection, published in ibid., no. 1284; and a famille-verte 'dragon' bottle from the Ruth and Carl Barron Collection sold at Christie's New York, 15th September 2015, lot 201.