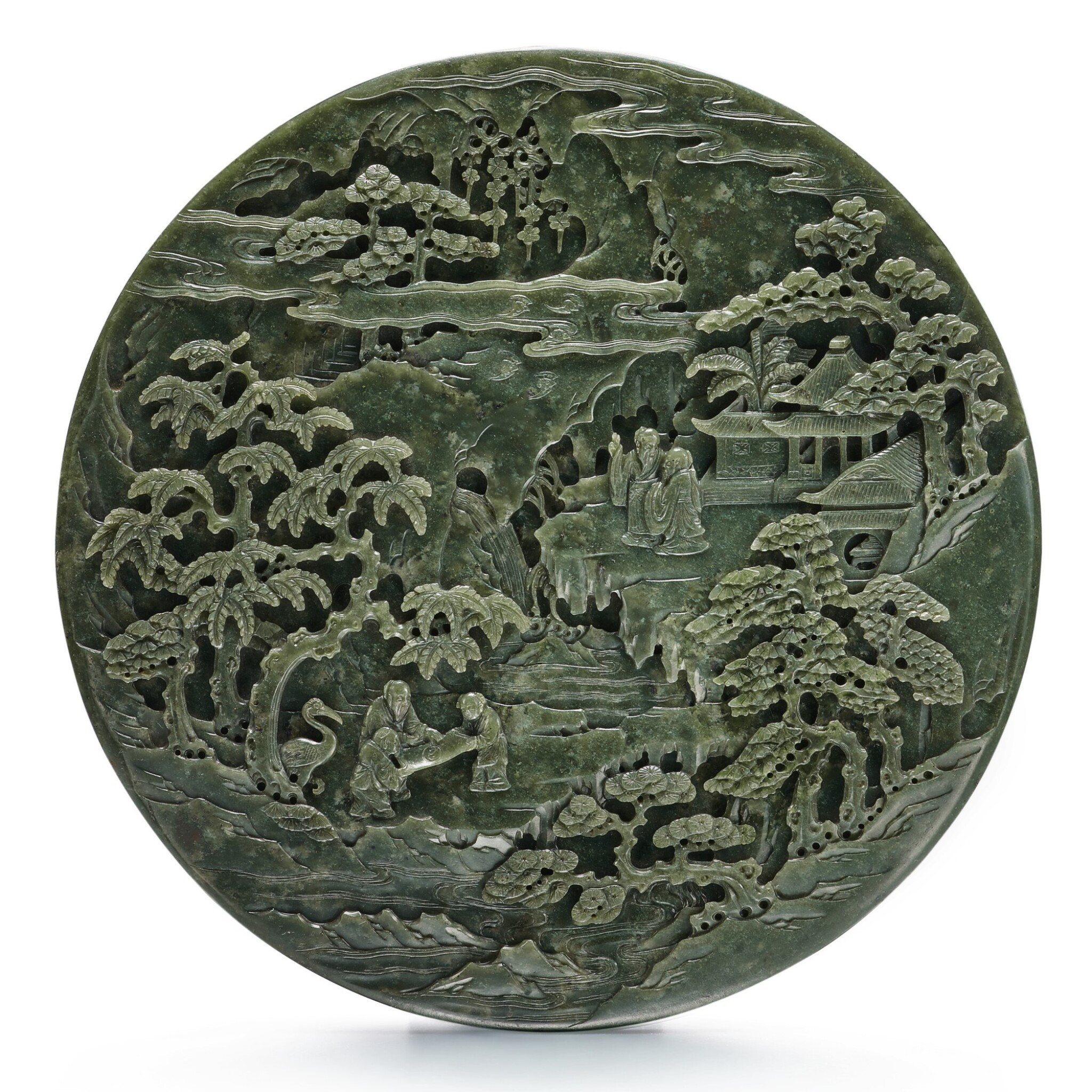 finely carved to one side in varying depths of relief with a paradisiacal mountain landscape, the craggy bluffs divided by a river zig-zagging through the composition and pooling in pond below, one overhanging cliff with two elderly scholars conversing near a walled garden, pagoda, and a studio with books visible through the moon window, a lower cliff with a third aged scholar studying a scroll painted with the yin-yang symbol held open by two attendants, a crane strutting nearby, all surrounded by gnarled pines, lofty wutong trees, and other lush vegetation interspersed with swirling clouds, the reverse carved in low relief with a flowering prunus branch growing from rockwork, a pair of insects flying nearby, the stone of even deep green hue

Overall in good condition with a few minute nicks to edges. The stone with scattered pale green and black flecks.

With varying levels of relief expertly carved and finished to a lustrous gloss, the present screen is a superb example of jade workmanship characteristic of the type created in the Imperial Palace during the 18th century. The skill of the carver is evident in the impeccably detailed figures and the vast ethereal landscape.

The Qianlong Emperor advocated that jade mountains and carved panels should carry the spirit of paintings by famous past masters. It is recorded that a number of classical paintings from the Emperor's own collection were ordered to be reproduced in jade, such as the well-known painting Travelers in the Mountains, by the eminent Five Dynasties painter Guan Tong (907-60). The Gengzhi tu, a set of forty-six paintings illustrating rice and silk culture commissioned by the Kangxi Emperor in 1696, was also recreated and is seen carved on a pair of screens in the Seattle Art Museum, Seattle, illustrated in James C. Y. Watt, Chinese Jades from the Collection of the Seattle Art Museum, Seattle, 1989, pl. 76.

Related screens carved from spinach-green and white jade, as well as apple-green jadeite, are known. Compare a smaller jadeite screen from the Heber R. Bishop Collection carved with a similar landscape, now preserved in the Metropolitan Museum of Art, New York (accession no. 02.18.518); and a spinach-green jade screen sold in our Hong Kong rooms, 8th October 2014, lot 3684. See also a screen with the reverse decorated with prunus and rockwork, sold in our London rooms, 21st October 1974, lot 58. Another with a gilt-bronze and cloisonné stand was exhibited in The Arts of the Ch'ing Dynasty, Oriental Ceramic Society, The Arts Council Gallery, London, 1964, cat. no. 410. See also a pair, with deer traversing a similar landscape, included in the exhibition Three Dynasties of Jade, Indianapolis Museum of Art, Indianapolis, 1971, cat. no. 35.