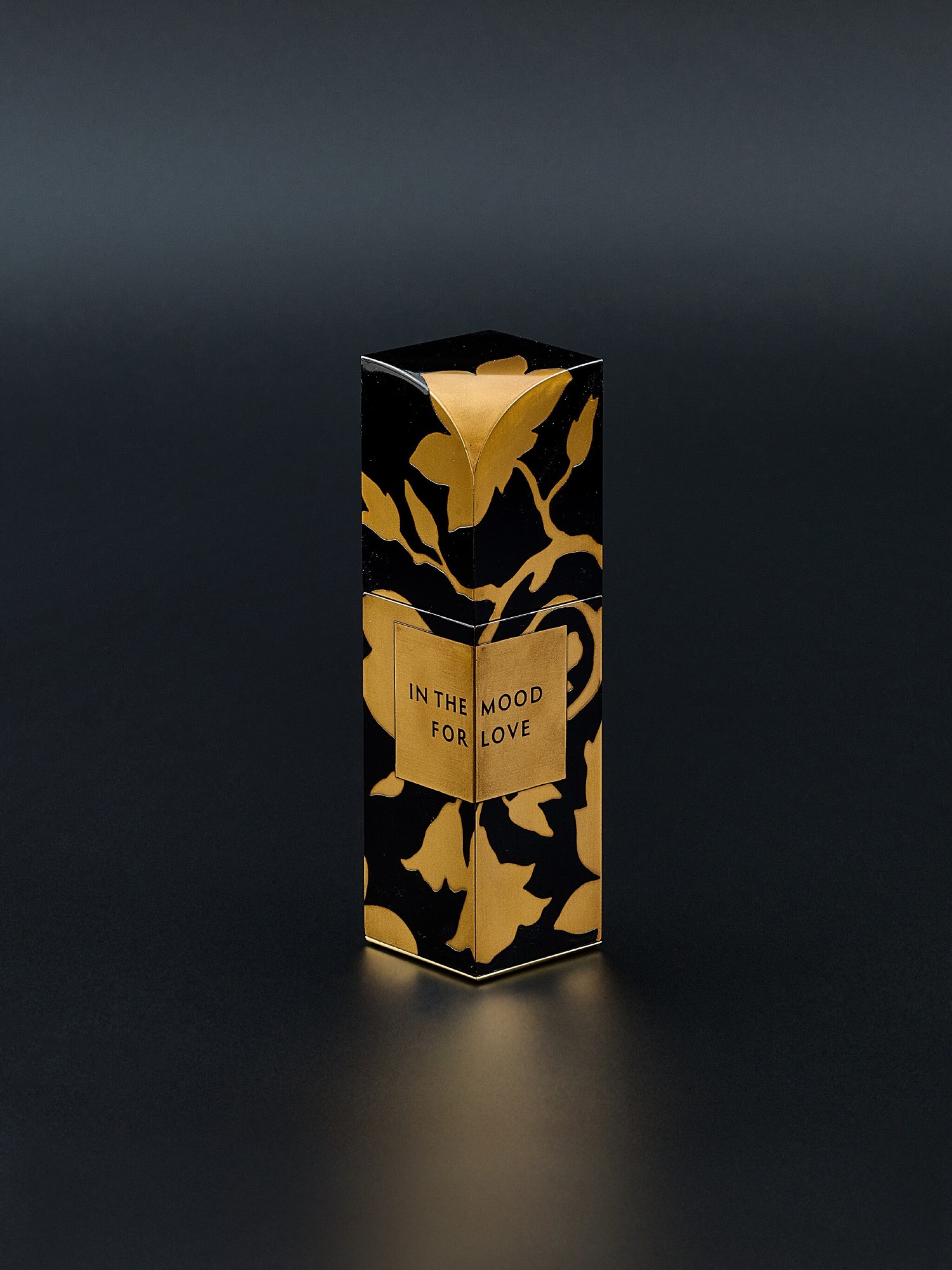 In The Mood For Love - Noir

This artwork is a unique piece. It is the first in a collection of ten unique pieces, all inspired by "In The Mood For Love" and created for this series.

"If I were to describe IN THE MOOD FOR LOVE as a scent, what would it be? My take is that it would be the smell that flooded the senses of Chow Mo-Wan when he buried his secret in the stone walls of Angkor Wat; fresh grass in the morning, damp earth on the walls, sweat in the creases of his short-sleeved shirt, all combined with an aroma deeply ingrained in his memory - the intoxicating scent that trickled from the neckline of Su Li-Zhen’s qipao. The scent of Su Li-Zhen has always eluded me, but if I had to imagine it from my own memories, it would be the scent that my wife used to wear when she was seventeen.

To mark the 20th anniversary of IN THE MOOD FOR LOVE, we were not content to simply look back. Rather, we wish to take a step forward and offer more possibilities for the audience to appreciate the film. Over the past three years, we have worked with a group of artists in search of a scent. Our intention is to design a three-dimensional experience, through which our audience can relive the sensations that Chow Mo-Wan perceived that morning in Angkor Wat - the grass, the stone walls, and the scent of Su Li-Zhen, trickling from the neckline of her qipao.

We have immensely cherished this multidisciplinary collaboration, and must first express our gratitude to Mr. Alberto Morillas for his attention to detail in recreating the scent of Su Li-Zhen. We would also like to thank Mr. Noritaka Tatehana for his elegant design of the body of this work. Combining traditional Japanese craftsmanship with the textures of lacquer, mother-of-pearl and pure gold powder, Mr. Tatehana has beautifully expressed the textures of grass, stonewalls and the qipao. Finally, I must thank my wife, Esther, for creating the first memories that have inspired and guided this project."

"I was inspired by several elements of Wong Kar Wai's IN THE MOOD FOR LOVE, from the period costumes and wallpaper to the lustrous color palette created by cinematographer Christopher Doyle.

The shape for this IN THE MOOD FOR LOVE essence is inspired by the high collar of Su Li-Zhen's 60s qipao. The secret held by a woman wearing a collar is the key inspiration for this work, which main theme of 'sharing secrets' is expressed as a metaphor for an invisible sensation through the essence contained within."

Noritaka Tatehana was born in Tokyo in 1985 to a family that runs a public bathhouse "Kabukiyu" in Kabukicho, Kamakura. Influenced by his mother, a Steiner-educated doll maker, he learned to make things with his hands from an early age. In 2010, he graduated from Tokyo University of the Arts, majoring in dyeing and weaving. He studied the culture of prostitutes in the Edo period (1603-1867) and produced yuzen-dyed kimonos and geta shoes. His work has been featured in exhibitions such as "Image Maker" (21_21 DESIGN SIGHT, Tokyo, 2014), "Future Beauty" (Museum of Contemporary Art Tokyo and others, 2012), "The Aesthetics of Spell Power" (Taro Okamoto Memorial Museum, Tokyo, 2016), "It's always the others who die" (POLA Museum Annex, Tokyo, 2019), and "NORITAKA TATEHANA: Refashioning Beauty" (Portland Japanese Garden, USA, 2019). His work has also been exhibited in New York, Paris, Belgium and elsewhere in the world, including a performance of Bunraku (Japanese traditional puppets) at the Fondation Cartier pour l'Art Contemporain in Paris in March 2016. His works are part of major museum collections such as the Metropolitan Museum of Art, New York, and the Victoria and Albert Museum, London. He was appointed as the exhibition director of “Edo Tokyo Rethink”, an online exhibition focusing on Tokyo's traditional industries, organised as part of the “Edo Tokyo Kirari Project” led by the Tokyo Metropolitan Government (Wakei Juku, former Marquis Hosokawa's residence, 2021).