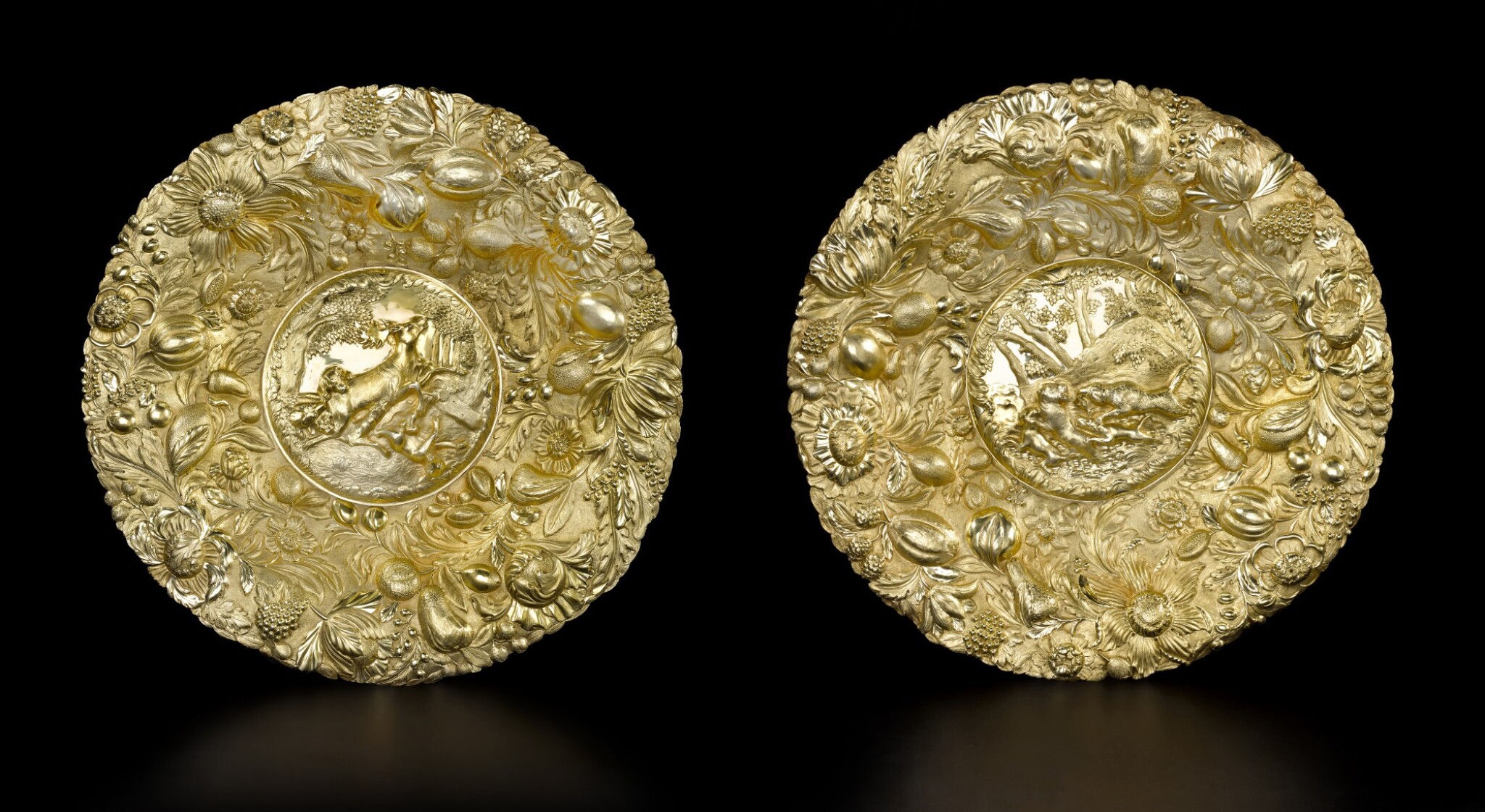 circular, with two vignettes of animal hunts surrounded by deep borders of floral and fruit ornament

Clear hallmarks. One dish is missing one of its nuts holding on the plaque. One dish has a small split in the rim. Overall good condition.

Probably the earliest of William Pitts's spectacular series of silver-gilt sideboard dishes date from 1809, such as the example sold by Sotheby's, London on 22 November 1984 (lot 103): 'the centre cast, chased and applied with a scene representing the Feast of the Gods. . . the border further decorated with grotesque masks and reclining Sea deities.' Two other Pitts dishes of the same design are in the Royal Collection, dated 1810 and 1812. The latter is described in a contemporary bill from Rundell, Bridge & Rundell as, 'A richly chased sideboard dish, to match His Royal Highnesses, and with devices of the Feast of the Gods, from a design by Michel Angelo.' (E. Alfred Jones, The Gold and Silver of Windsor Castle, Letchworth, 1911, p. 114, pl. LVIII).

The year 1809 was clearly a busy one for Pitts's workshop; several other sideboard dishes were made, dating from that year, including a pair whose design was based on 17th century originals, with Tudor rose bosses at the centre surrounded by flowering plants arranged in fluted panels. (Sotheby's, London, 14 March 1996, lot 79). In fact, the early 19th century fashion for such pieces was kindled by an awakening of interest in antique silver, especially the oversized display plate of the reigns of Charles II, William III and Queen Anne. The London Livery Companies were proud possessors of such awe-inspiring objects. Even relatively plain examples attracted attention, such as the three large silver-gilt flagons and their companion rosewater dishes of 1699, a gift in 1702 to the City of London Mansion House. (G.C. Maclean, 'The Mansion House Plate,' The Connoisseur, London, November 1912, pp. 140, 143 and 144) These objects formed part of the prominent display in the Egyptian Hall at Mansion House on the occasion of the Lord Mayor's dinner in 1803. On a large piece of green baize, 'there were the letters ''G.R..'' in variegated lamps, with a crown over, and a most brilliant star under, there was a very large oval mirror underneath, with a small oval mirror. On each side was a very large square glass, and under them were placed shelves, on which were, on the upper one, three very large silver gilt dishes of about 20 inches in diameter, each having the City Arms on the center . . . and round the arms of the center dish was the inscription, ''The Gift of Lady North.''' (The Daily Advertiser and Oracle, London, Tuesday, 12 April 1803, p. 2d)

This interest in arresting examples of antique silver and silver-gilt in long outmoded styles was reflected in fierce competition and rising prices. On 26 May 1802, James Christie offered 'twelve Silver Plates, engraved with the Labours of Hercules, by one of the great and early Masters of the German School,' which are said to have sold for £300. The following month it was reported that they had changed hands again for £500. (The True Briton, London, Thursday, 20 May 1802, p. 4c, advertisement; The Sun, London, Monday, 28 June 1802, p. 2d)

Pitts's production of sideboard dishes continued apace throughout the 1820s, probably mostly for Rundell's, the royal goldsmiths whose list of wealthy customers was the envy of the entire trade. His nearest rival was Edward Farrell who supplied an extraordinary range of plate to the retail goldsmith, Kensington Lewis. The latter's chief customer was George IV's brother, Prince Frederick. Duke of York. The brothers both owned significant collections of display pieces, including a number of large, decorative dishes. One of the lots in the Duke of York's sale at Christie's in 1827 was just such a piece: 'An ancient deep dish, for a sideboard, 20 inches in diameter, with large flowers with their running stems entwined, chased in high relief within, and a running sprig of oak chased upon the border; weight, 95 oz. 5 dwts.' (A Catalogue of the Whole of the Magnificent Silver and Silver Gilt Plate, of His Royal Highness, The Duke of York, Second Day's Sale, 20 March 1827, p. 17, lot 93)

English silversmiths continued to supply the demand for sideboard dishes and shields until well into the reign of Queen Victoria. As late as 1886, when a testimonial of silver dessert pieces, candelabra, &c., were presented to John D. Dent, the President of the West Riding Liberal Association (Eastern Division), the most important piece was, 'a very elaborately chased silver sideboard dish (27 ½ in. in diameter) . . . The border of the dish is composed of rich ornamental friezes, separated by alternate male and female masks.' The suppliers of this dish was the old-established firm of R. & S. Garrard & Co., whose stock included both old and new silver. (The Knaresborough Post, Harrogate, Saturday, 27 March 1886, p. 5c)