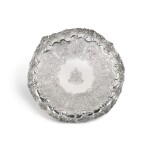 Jacob Waley and Simon Waley Waley's paternal grandfather was Jacob Levi (1746-1816), an engraver, who was a member of the prominent 18th/early 19th century Levi family of Portsmouth. A silver torah finial, mark of Thomas Evans and Jacob Levi, London, 1784, which is believed to have been made for the synagogue of this community, is to be included in the forthcoming Treasures sale, to be held at Sotheby's, London on 7 December this year.