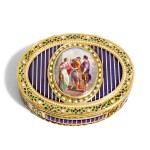 oval, the lid centred with an oval enamel plaque painted with a classical scene, within a frame of alternating opalescent white enamel beads and green leaves, surrounded by translucent blue enamel over an engine-turned ground, decorated with fine gold stripes, within a leafy green and blue enamel border on a sablé ground, the base similarly decorated, the sides with additional garlanded dividers, maker's mark, charge and discharge of Henri Clavel, Paris date letter for 1784, the rim numbered: 533

A smart box in good condition, bar some very small losses to enamel; a few surface scratches to central medallion

The present lot, as well as three other precious gold boxes in this sale (lots 152, 154 and 155) were formerly part of the distinguished collection of Dutch and Flemish paintings, European sculpture and works of art, silver, French furniture and decorative arts formed by Walter and Catalina von Pannwitz.

Walter von Pannwitz, born in Mehlsack (East Prussia) in 1856, was a successful lawyer, art collector and patron (see fig. 1). In 1888, he became mayor of Kulmbach and in 1893 he married Hedwig Faber in Marburg. Their marriage lasted until 1907. Von Pannwitz became somewhat well known as a lawyer for important criminal cases in Munich, such as the trial of Matthias Kneißl, an infamous Bavarian thief who was celebrated as a national hero in a number of books and films. Well-connected among German intellectuals and academics at the time, such as the writer Ludwig Thoma, as well as the art historians Max Friedländer and Wilhelm von Bode (1845-1929), von Pannwitz began collecting art as a young man. Both Bode, founder of the museum of the same name, and Friedländer acted from the early stages as advisors for his ever-growing art collection. Subsequently the Pannwitz collection grew even more after Walter’s second marriage to Catalina Roth, a rich Argentinian heiress, who herself had already acquired a large collection of paintings.

In 1904, the Berlin-based auction house Hugo Helbing sold some 500 objets d’art,  tapestries, clocks and fine Meissen porcelain from the collection (see fig. 2), after which some of the porcelain found its way to the Bavarian National Museum. Ten years later, the couple moved to the wealthy district of Berlin-Grünewald, where they had commissioned the architect German Bestelmeyer for the design of the neo-classicist Pannwitz Palais to host their extensive art collection.

Following Walter von Pannwitz’s death in 1920, Catalina moved to the Netherlands, where she acquired Hartekamp Castle. It soon became a cultural centre for entertaining European aristocracy and William II (1859-1941), the last German Emperor, is said to have paid at least a hundred visits. Parts of the important Walter and Catalina von Pannwitz collection were also exhibited in the Rijksmuseum in 1947.