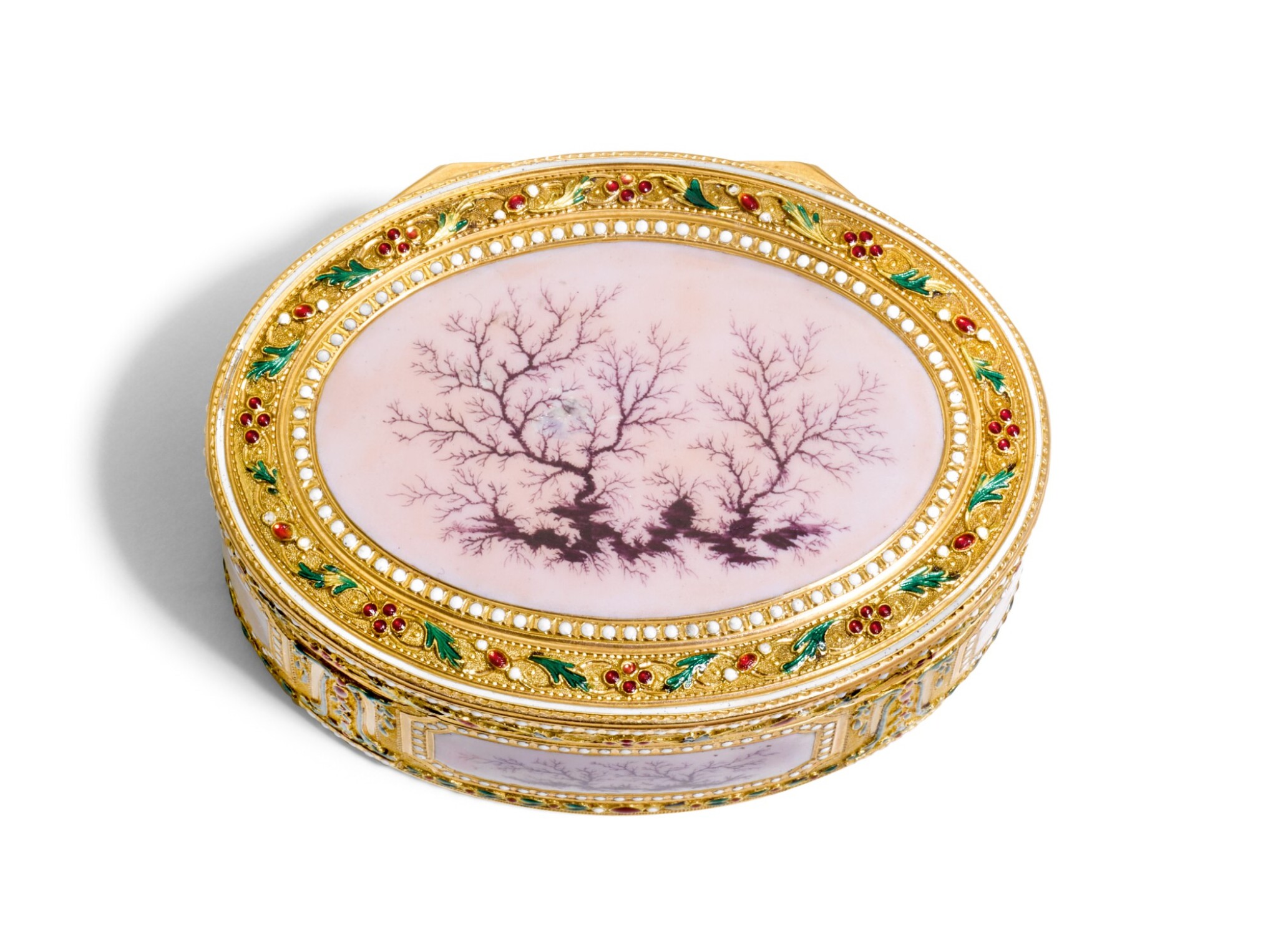 Good general condition; small damage to pink enamel on the lid, some minor losses to enamel

Walter and Catalina von Pannwitz Collection;
thence by descent
In 1737, Charles-Alexandre Bouillerot was born into a Parisian family with a long tradition in gold box making, the oldest member being the respected bijoutier Nicolas Bouillerot (active 1720-1754). In 1769, Charles-Alexandre became master entering his maker's mark, a ‘fleur de lys couronnée, les deux grains, CAB, une mitre’ (Henry Nocq, Le poinçon de Paris, Paris, 1968, vol. I, p. 164), sponsored by his father. He is listed at rue du Haut Moulin until 1785, followed by rue de la Harpe from 1786-88, and subsequently at quai Pelletier until 1791. Today, gold boxes by Charles-Alexandre Bouillerot can be found in important museum collections, such as the Metropolitan Museum of Art (inv. no. 1975.1.1543), or the Musée du Louvre. For a very similar, although more elongated, example imitating ‘agate arborisée’ in enamel by Bouillerot, see also Serge Grandjean, Catalogue des tabatières, boîtes et étuis des XVIIIe XIXe siècles du musée du Louvre, Paris, 1981, cat. No. 45, p. 59, and for a similar example by the prolific Parisian bijoutier Joseph-Etienne Blerzy, see Sotheby's New York, 16 April 2013, lot 354.
Like most 18th century trends in Parisian gold box making, this imitation of a patterned agate in pale pink and purple enamel was a short-lived one – most gold boxes in this style seem to date between the late seventeen seventies, such as the present lot and 1782/3. A fascination and scientific interest in hardstones, and agates in particular, predates the 18th by far, but the were especially admired in that period for being ‘quintessential stones of imagery’ (Alexis Kugel, Gold, Jasper and Carnelian, Johann Christian Neuber at the Saxon Court, London, 2012, p. 51), providing an abundance of objects or landscapes to be seen in the natural pattern of the stone.