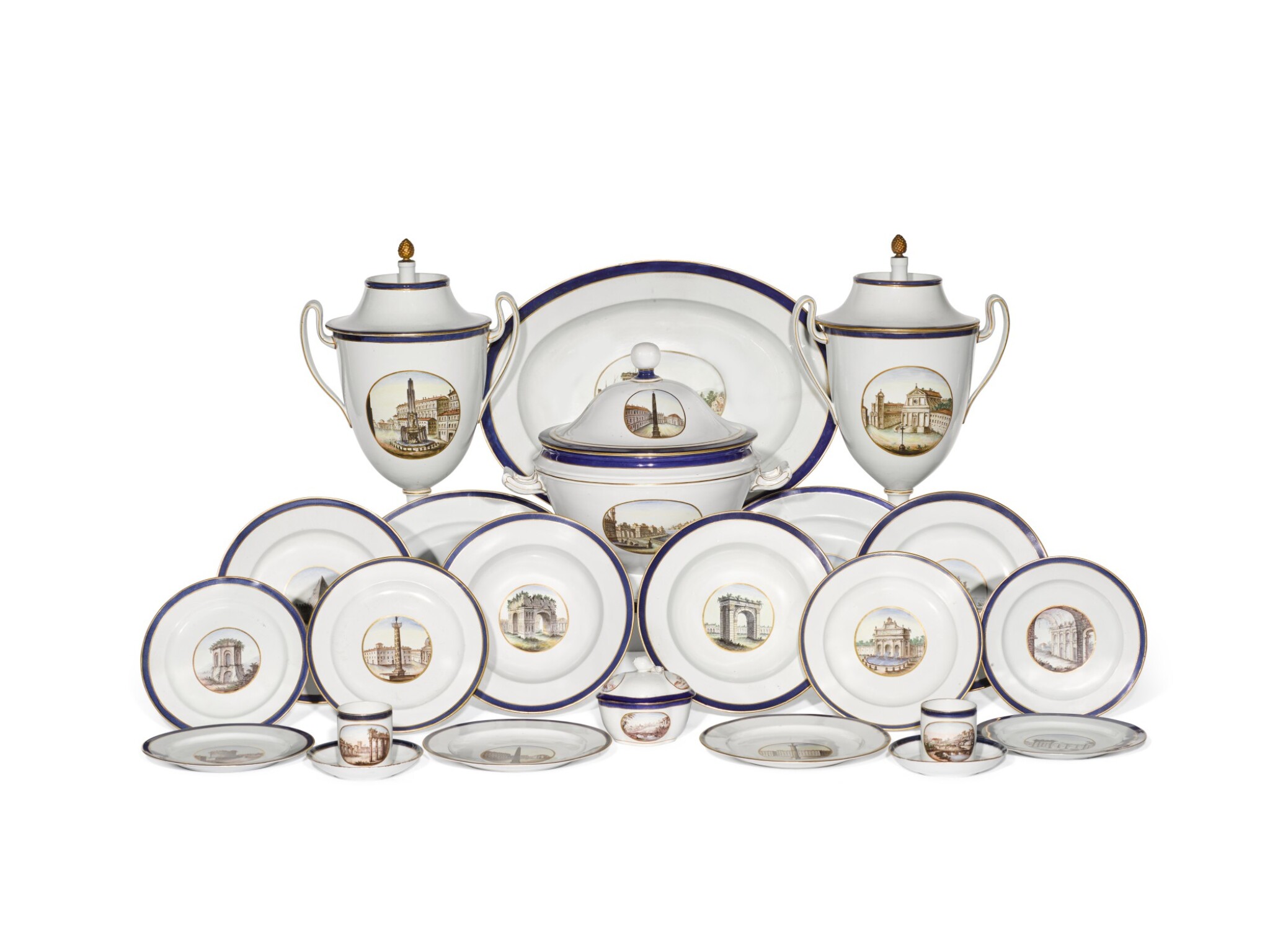 In overall good condition. a pair of ice pails and covers, 41cm. high, 28cm. wide across the handles, painted with views to both sides: overall of good appearance. One has a fine hairline crack from the rim besides one of the handles which is hardly visible from the outside. This example also has a small chip to the corner of one base. Otherwise in good order. Some minor rubbing to gilding around the socle. Both would have had originally plain liners which are now deficient. Some glaze pitting and fritting to covers. a two-handled tureen and cover, 32cm. high, 36cm. wide across handles, the cover painted with three roundels and the tureen painted with oval panels to each side and roundels below each handle: Overall of good appearance. The cover has a small shallow chip to the edge and another to the inner edge of the flange. Otherwise in good condition. A few light scratches. two oval serving dishes, 47cm. wide, 34.5cm. deep, 6cm. high: One has a rim chip at 7 o'clock. The other also with a small rim chip. Slightly overfired. One is slightly warped to the rim. three oval serving dishes, 30cm. wide, 23.5cm. deep, 3cm. high: Generally in good order. One example with some scratches to the well, which could be cleaned. Light rubbing to the gilt rims. a circular plate, 26cm. diameter: in good condition. seventeen soup plates, 24.5cm. diameter: each titled in grey-black script the reverse. Nine have views of ruins of which one (Temple di Fauftina) has a faint hairline crack at 8 o'clock. Eight have views of palaces, churches, etc., of which seven are in good order, the eight with a view of Palazzo Borghese has a minute chip to the underside of the rim at 4 0'clock. Some glaze over chips from firing and slight wear but overall good order. ten plates, 25cm. diameter: each of these is titled in grey-black to the reverse. Six have views of ancient ruins, of which one (To di Cibele) has a section of the rim between 4 and 5 o'clock restored, which is old and in need of refreshing. The four other plates have further views and there are in generally good order. Some firing flaws and light rubbing to gilding. twelve side plates, 21.5cm. diameter: each of these is titled in grey-black to the reverse. Four of them with views of palaces, in good order. The remainder with ancient ruins and monuments, the one with Colonna Traiana has a shallow footrim chip, the example with Arco di Constantino has three stress cracks radiating around the footrim and the Curia Ostilia has a stress crack to footrim and a shallow footrim chip. Overall in good condition. thirteen bread plates, 19.5cm. diameter: each of these is titled in grey-black to the reverse. Seven in generally good order. One (Quare Milie di Pompeiana) slightly rubbed. One (Porta Castello) notably rubbed. One (Foo di Nerva) with a rim chip and an extending crack. Three (Colonna Traiana, Arco di Gaglieno, Gua di S.Giovanni) have rim chips and rubbing. a quatrefoil sugar bowl and cover, 12cm. wide, 10cm. high: painted with ruins and landscapes which are not titled. Generally in good condition. eleven coffee cans and twelve saucers: Not titled. Of the eleven coffee cans, eight coffee cans in generally good condition, with a little rubbing to the gilt rims and slight wear; one coffee can has a restored handle, probably a replacement; another has a similarly restored handle and crack; and a third has a crack to the rim and a small rim chip. The saucers: Six are in generally good order, with only minor rubbing to the gilding; three have more notable wear to the gilding; one has a crack to the rim; and two have rim chips.