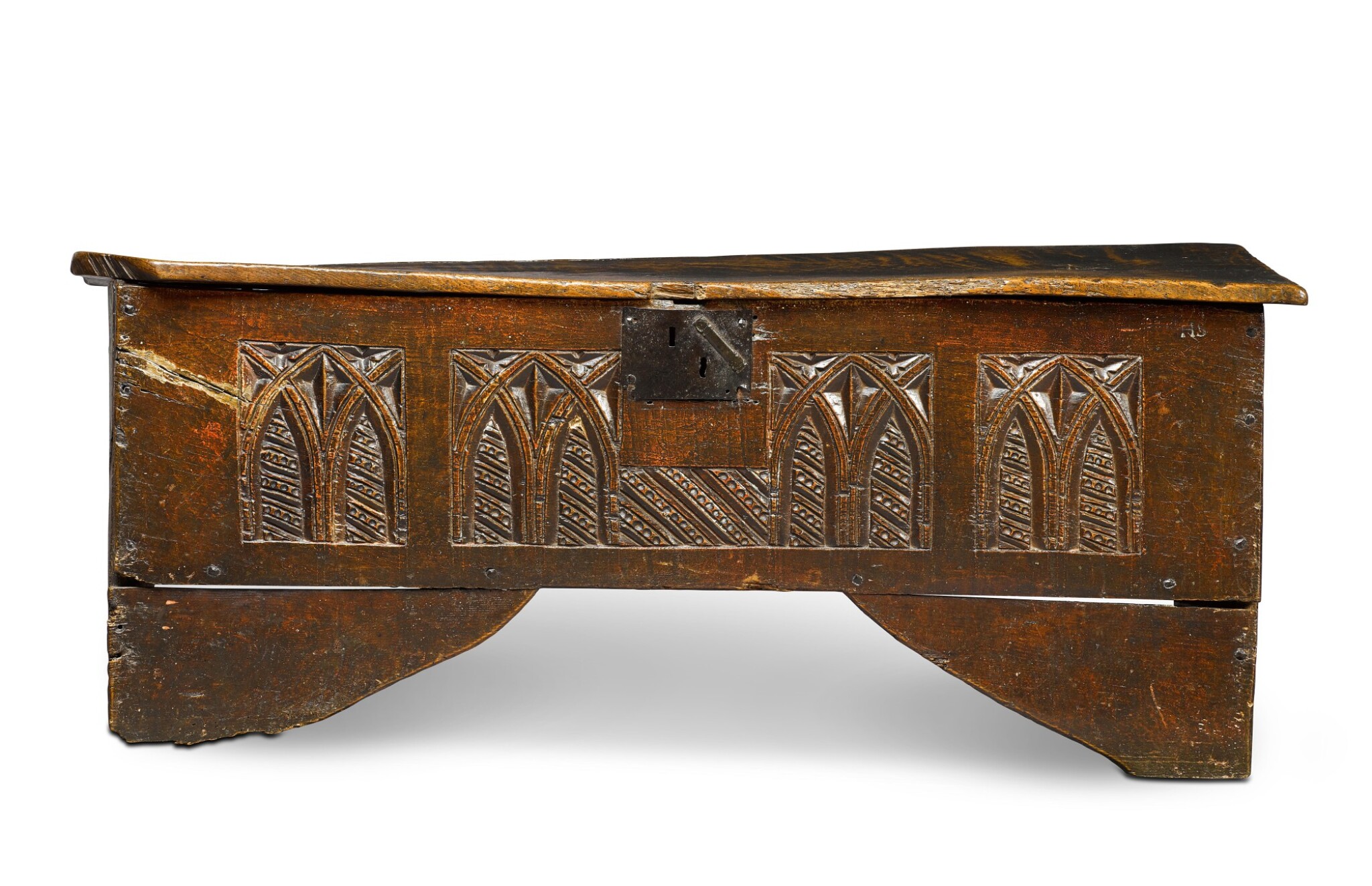 the hinged lid enclosing a compartment, branded HS, the front decorated with 'chip-carved' blind tracery and with traces of polychrome and scumble to the front and underside of the lid

To request a condition report for this lot, please contact Kate.OShea@sothebys.com

Clive Sherwood Esq.;
Until sold by his heirs, Sotheby's, The Clive Sherwood Collection, 22 May 2002, lot 53;
Acquired by the present owner from the above.

This important chest is an incredibly rare survivor, it is of a superlative colour, has a fine patina and the form it takes is strongly architectural. The carved decoration employed by its creator, relates to contemporary buildings. This 'chip-carved' detail cleverly creates a sense of the canted mullions on windows and the details of worked stone decoration. The applied brackets, asides from the practicalities of reinforcement, suggest the archway or truss of a building and create a sense of solidity.

For comparison see several examples, in the collection of the Victoria and Albert Museum, London, which feature blind tracery. In this group there is a chest front (W.430-1922) which has identical diagonal bands of decoration with punctuated ‘dot’ motifs below a lock site (Charles Tracy, English Medieval Furniture and Woodwork, London, 1988, cat. no. 309). It is possible that this carved detail is by the same hand as that on the present chest. There is a suggestion that this chest front in the V&A could have originated from Suffolk. This assumption on provenance is not solely because the piece had been acquired historically in Ipswich but through the relationship these carved bands of blind tracery have with that seen on other chests from the eastern counties of England (c.f. a chest from Stamford in Lincolnshire in the V&A, W.69-1916). Furthermore the extraordinary traces of reddish paint relate to the remnants of red decoration of another chest from Suffolk (Tracey, op. cit., no. 302).

The complex geometry of the carving is executed with sharp clean cuts produced by the V-gouge tool and is typical of the period (using incised ruled lines for guidance which rather wonderfully survive on the chest here). Herbert Cescinsky and Ernest Gribble, Early English Furniture and Woodwork, London, 1922, vol. I, suggest, 'The Geometrical form of interlacing circular heads, which produces the pointed or lancet arch at the intersections, was a favourite detail, possibly because it was easily remembered and as easily executed'. They illustrate three similar examples from the collections of W. Smedley Aston and Leonard G. Bolingbroke (figs. 31, 31 and 32), all of which they date to the end of the fifteenth century and feature the same plain space below their lookplates. It is interesting to note how the carver has adapted the design in order to accommodate the lock, which is almost certainly original.

Also see two examples of similar early chip-carved chests, both offered these rooms; a chest from Lincolnshire, again with traces of red paint, The Peter Gwynn Collection, 27 November 2001, lot 30 and The Age of Oak and Walnut, 28 September 2004, lot 20.

This boarded chest is fundamentally a full expression of early British craftsmanship. It is a 'working', decorative piece of furniture. It exemplifies Percy Macquoid's historic classification of early British furniture design from the 1900s; 'The Age of Oak', utilising English materials and techniques, the concept of 'truth to material'. The beauty of its simple construction, using just eight pieces of timber, does not detract from the skilled translation of what the carpenter joiner saw around them in Gothic building design.