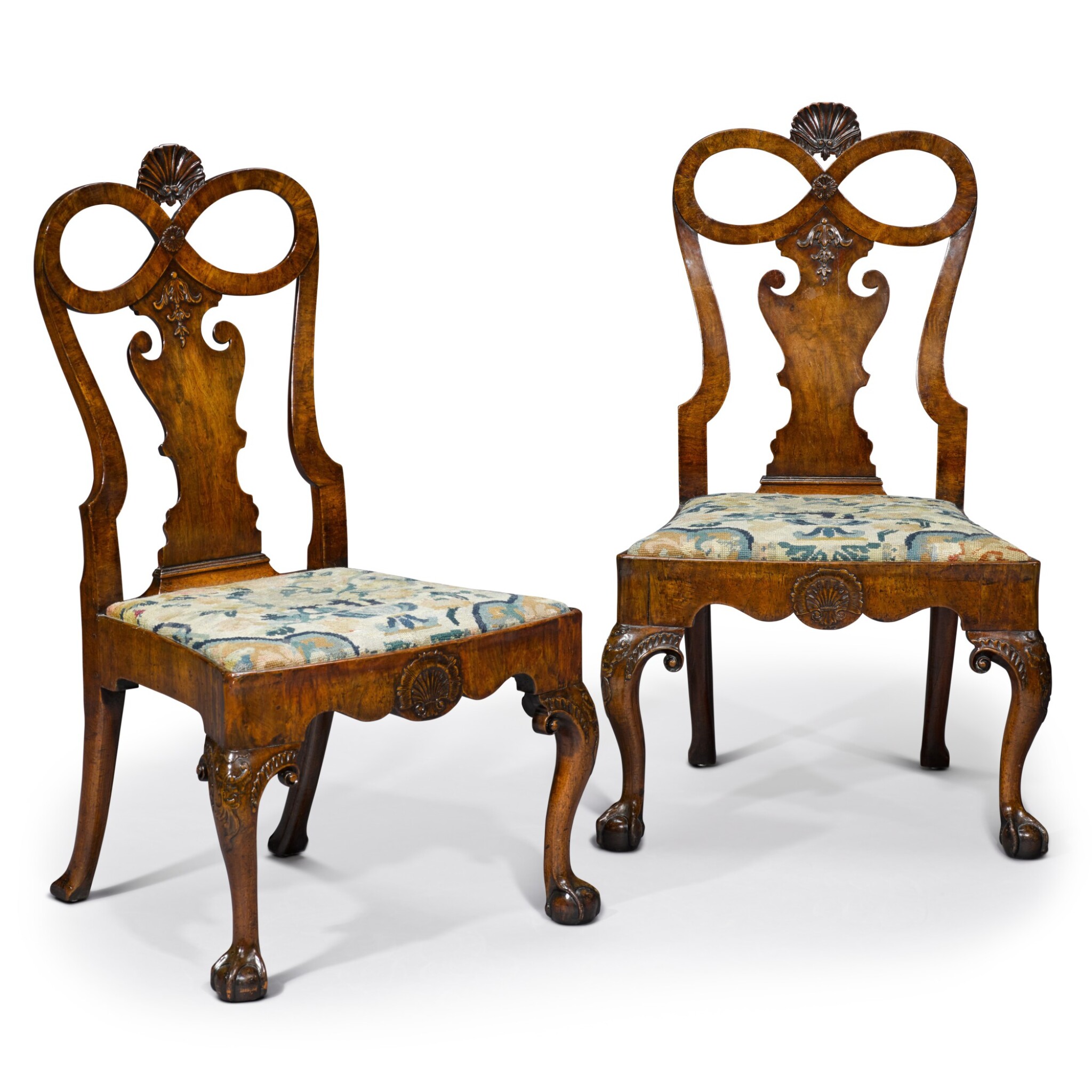 A pair of George II carved walnut side chairs

the pierced backrest surmounted with a shell over a looped top rail and shaped compass backsplat with a gros point wool needlework drop-on seat on trapezoid form seat rails with shaped apron centred by relief carved scallop on cabriole front legs with scrolled ears and acanthus knees on claw and ball feet, the front seat rail incised IIII and XIIII

In overall good restored condition and ready to place. The walnut veneers with a lovely patina and colour and there are typical signs of age including some replacements and restorations and small areas of worm damage to these veneers which no longer appear to be active. The stresses on the frame of the backrest which stem from the construction of this complex form are evident in a number of repaired breaks and secured joins to backrest and shoe of the curved splat. These restorations have been sympathetically executed and are of a very high standard. The evidence of old worm activity continues on the seat rail however they remain sound and sturdy. The veneers to the edge of drop in seats and face of the rails with typical filler and staining repairs to the figured walnut and once again, evidence of some replacements to small sections of veneer. Ears apparently original although one or two have been re-attached. Legs with a number of split repairs notably to back feet of one chair and front right leg of another. Feet re-tipped. Some movement to veneers above front right leg proper of one chair and generally the chairs with typical old marks, scuffs and scratches consistent with age and use. Very faded gros point wool needlework, but it is predominantly period.

This beautifully drawn pair of walnut side chairs originally belonged to a much larger suite - possibly up to fourteen corresponding with the incised numerals to the seat rails - and would have been intended to complement the emerging neo-Palladian iconography of fashionable early Georgian interiors. The dominant theme here is Venus, goddess of love, which is expressed emphatically with the scalloped shell to the cresting and apron. The leafy scrolled knee is a vestige from chair design of the 1720s, but the claw and ball foot is a distinctive Palladian device, thought to evoke Jupiter, supreme ruler of gods and mortals whose symbol was the eagle. The chairs share much in common with Giles Grendy's labelled oeuvre, making him a possible candidate for their authorship. Technically, they are very accomplished as the ergonomic, curved backrest was complex to execute requiring additional timber for the thicknessing of the uprights.

An identical set of four side chairs bearing the crest of the Vaughans of Courtfield, Welsh Bicknor, sold Sotheby's, London, 26 October 2016, lot 1136. The Courtfield chairs had similarly incised front seat rails, numbered II, V, VIII and XII, suggesting the present pair may have at one time belonged to the same long run.

A further related example, with an identical backrest, formed part of Judge Irwin Untermyer’s bequest to The Metropolitan Museum of Art, New York (Accession Number 64.101.950) and is illustrated John Gloag, English Furniture with some Furniture of other countries in the Irwin Untermyer Collection, Thames and Hudson, 1958, pl. 77, fig. 102.