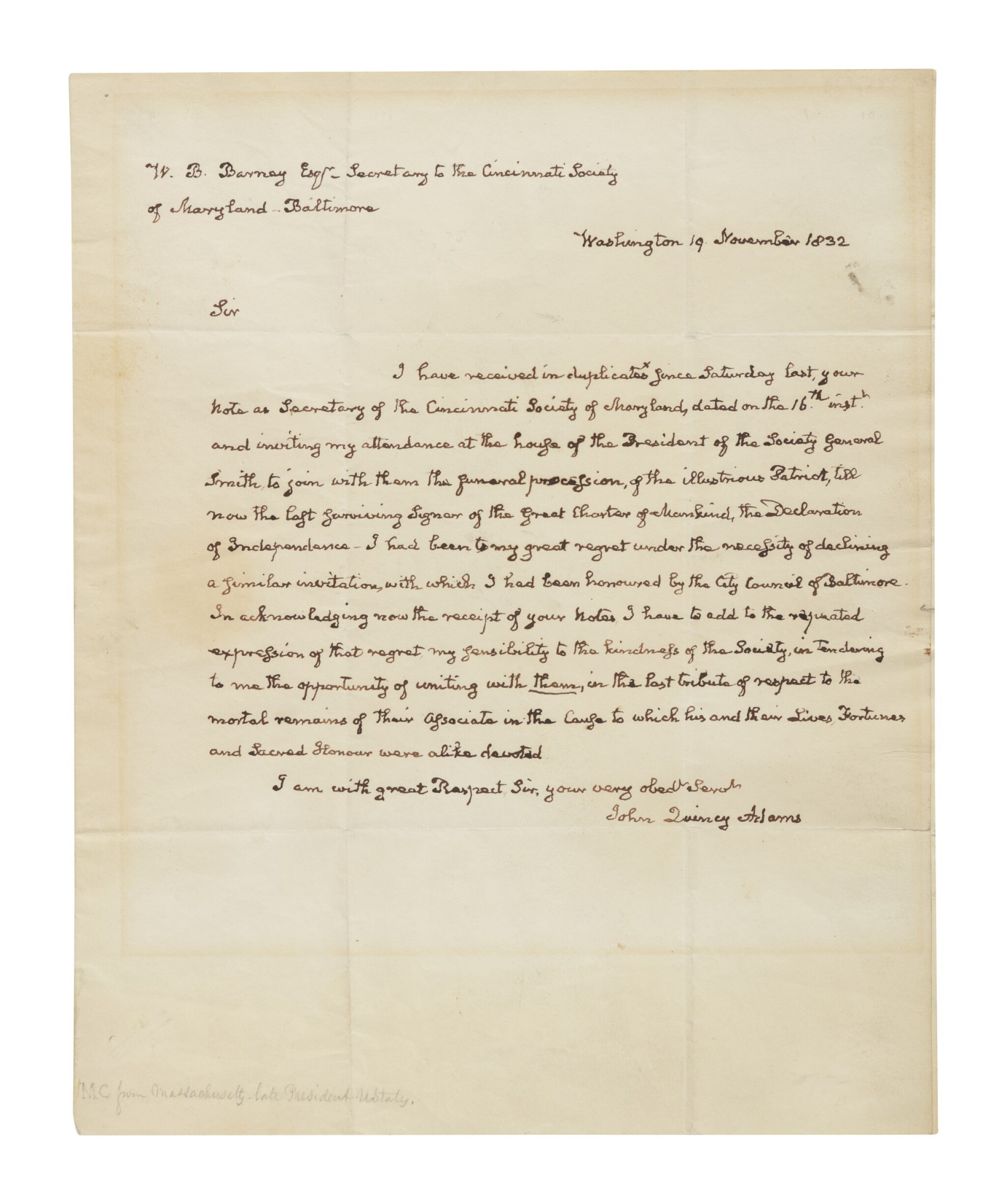 Autograph letter signed ("John Quincy Adams") as as a Representative from Massachusetts, to W. B. Barney, commenting on the death of Charles Carroll of Carrollton and the Declaration of Independence

John Quincy Adams here replies to William Barney, Secretary of the Society of the Cincinnati of Maryland, who had invited Adams to join the funeral procession of Charles Carroll of Carrollton, who had died, aged 95, just five days earlier. Carroll, a wealthy Maryland planter and businessman, was born in Annapolis but educated in France. He embraced the cause of Independence after returning to the colonies and, elected to the Continental Congress in early July 1776, he perhaps the wealthiest—and the only Catholic—Signer of the Declaration of Independence.

Carroll remained active in politics, serving as both a state and federal senator and strongly supporting the Constitution, although his attention was more focused on business than many of the other Founders. But when Thomas Jefferson and John Adams both died on July 4, 1826, the fiftieth anniversary of the Declaration of Independence, Carroll was thrust back into the national spotlight as the last surviving Signer. Numerous counties and towns were named for him, and his death was commemorated with observances around the country. Many of Carroll's eulogists echoed—as Adams does in the closing of this letter—phrases from the Declaration.

"I have received in duplicates since Saturday last, your Note as Secretary of the Cincinnati Society of Maryland, dated on the 16th. instn. and inviting my attendance at the house of the President of the Society General Smith, to join with them the funeral procession, of the illustrious Patriot, till now the last surviving Signer of the Great Charter of Mankind, the Declaration of Independence. I had been to my great regret under the necessity of declining a similar invitation, with which I had been honoured by the City Council of Baltimore. In acknowledging now the receipt of your Notes I have to add to the repeated expression of that regret my sensibility to the kindness of the Society, in tendering to me the opportunity of uniting with them, in the last tribute of respect to the mortal remains of their Associate in the Cause to which his and their Lives, Fortunes and Sacred Honour were alike devoted."

Following Carroll's death, President Andrew Jackson closed the federal government for a period of mourning, the first time this honor was granted since the death of George Washington.