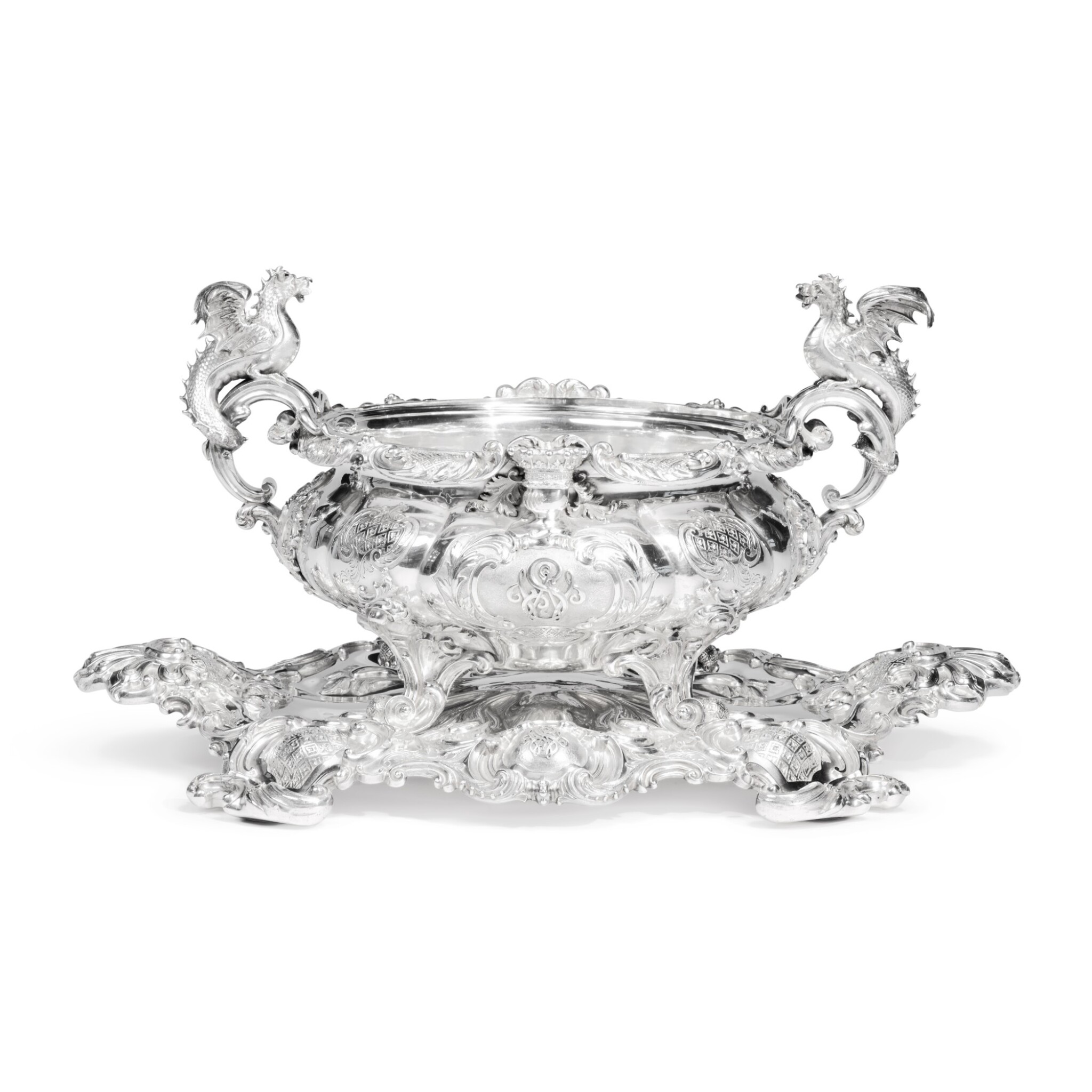 shaped circular, on four massive foliate supports, chased with panels of rosettes and diaper, applied with WS monogram under an earl's coronet, the handles formed as wyverns holding gauntlets in their mouths

marked on base of body, base of stand, and side of liner; stamped underneath stand STORR & MORTIMER, stand and liner numbered 264; engraved on all parts No. 2 and with scratch weights

tip of wing to one handle dragon missing; dents to bottom of one side of liner; monograms changed in the mid 19th century, otherwise good, heavy and sculptural

Robert Henry Herbert, 12th Earl of Pembroke and 9th Earl of Montgomery (1791-1862) was eldest surviving son of the 11th Earl and Elizabeth Beauclerk. He grew up at the Herbert family seat of Wilton house, and in 1814 at the age of 23 married a widowed Italian pricess he had met in Sicily. His father forced the couple to separate, but after the elder Earl's death 1827 his heir neglected his duties in England in favor of an extravagant lifestyle and a rotation of mistresses and illegitmate children, acknowledging seven of the latter in his will. An obituary noted, "His person, his manners, his dress, belonged rather to the elgant school of the best days of George III... brilliant and distinguished in society, he maintained to the last the reputation of a man of elegance and fashion."

He split his time between his London residence at 7 Carlton House Terrace, and a Parisian residence at 19 Place Vendome, the Hotel d'Evreux, which he enhanced with paintings by Pater and Lancret. Lord Malmsbury wrote of him, "Lord Pembroke lives in great state in Paris, and is as famous for his cook as for his horses. He is a very handsome man."

To enhance the experience of his dinner guests, the Earl ordered an extensive service of plate in London, to furnish both his London and Paris residences. The earl's French tastes were aptly matched to the Regence-influenced design of the pieces, one of the most elaborate of Storr's late creations. Most of the service has dates between 1834 and 1836, though some earlier pieces suggest he patronized Storr from the 1820s. A newspaper article noted the arrival of part of the service in Paris in December 1835:

"A subject of general conversation among the upper classes, at the moment, is a splendid service of plate, for thirty persons, just arrived in Paris, belonging to the Earl of Pembroke, and which a privilged few have been permitted to view at his Lordship's residence. Its weight is 630 pounds French, and it cost upwards of 700,000f... Its manufacture occupied three years. Nothing can exceed the beauty and delicacy of the chasing."

While the London portion of the Storr service was sold when the Earl gave up that mansion in 1851, he retained the balance of the silver in his Paris house, which was only sold after his death in 1862. Numerous pieces of the service have appeared at auction and in private collections over the last 30 years, but this is the only soup tureen to have re-surfaced to date. The grandest surviving piece is probably the 40 inch (100 cm) nine-light gilt candelabrum, now in the Metropolitan Museum of Art, New York (60.55.10a–s.)

We would like to thank Miles Harrison for his assistance in researching this lot.