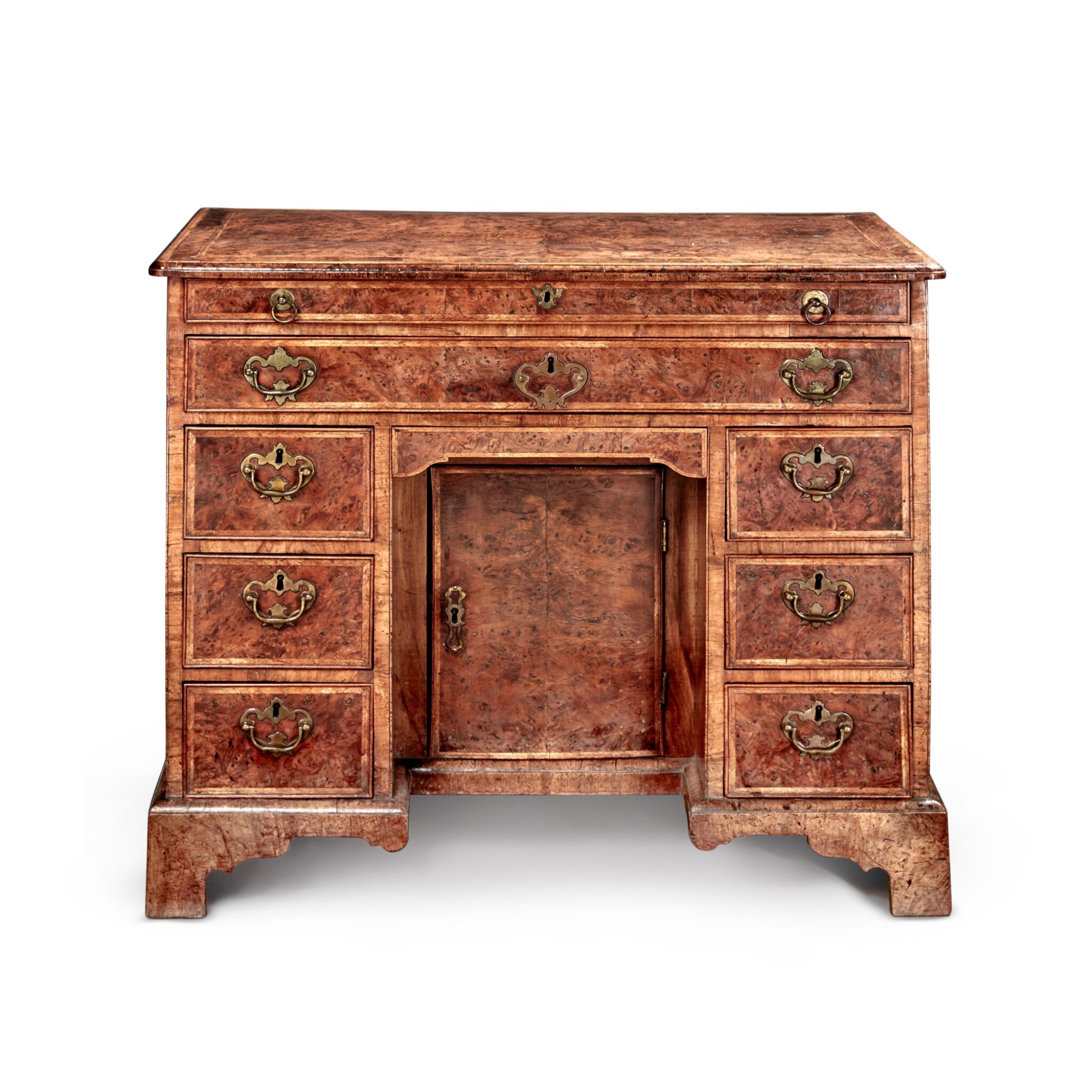 the quarter veneered top with double feather-banding; above two long drawers, the upper fitted with a green baize-lined slide and inkwell compartments; the central kneehole recess with drawer in the arch and flanked either side by a tier of three short drawers, all drawers feather-banded; on bracket feet

Overall a beautiful colour and in good overall condition with well chosen burr veneers. With typical minor dents, marks, scratches and some old vertical age cracks on the sides. Small patches to veneer at top rear corners and some of the drawer surrounds and feet, and some restoration to cockbeading, all commensurate with age and use. Handles apparently original, and escutcheon to lower long drawer probably replaced. The top with very slight undulation due to a restored shrinkage crack running across the centre. Cupboard door is slightly warped but opens, closes and locks normally. Drawers with oak linings and slide easily. Interior of top drawer with old ink stains and wear to green baize on writing slide. 2 keys.

Kneehole desks, referred to in contemporary inventories as 'burroes' or 'burrows' after the French bureau, emerged as a new form in the first decades of the 18th century and from an early date were associated with prestigious commissions, including a 'very fine Wallnuttree Burrow Table and Drawers' supplied to the Princesses's Library at Hampton Court Palace in 1716 for the substantial price of £70. Like many categories of furniture at the time their function and nomenclature exhibited a certain degree of fluidity. Initially they appear to have served as dressing tables rather than writing desks and placed primarily in bedchambers and dressing rooms, such as the 'Dressing Buroe with Drawers' and the 'walnut-tree dressing buroe table' recorded in the Duchess of Chandos's Dressing Room and Chintz Bed Chamber at Cannons in 1725 (see Adam Bowett, Early Georgian Furniture, Woodbridge 2009, p.120-23). They were sometimes accompanied by pairs of stands en suite in a nod to the traditional 'triad' of dressing table, stands and looking glass widespread in the latter part of the preceding century. Even long after the form had fallen out of fashion Thomas Sheraton described in his 1803 Cabinet Dictionary a 'Dressing Chest' as a 'small case of drawers, containing four drawers...and there is sometimes a knee hole in the front'.

By the time the present lot was made in c.1730, the kneehole bureau has assumed its primary role as a a writing desk, as evidenced by the upper drawer fitted with a writing slide and compartments for pens and inkwells. The highly unusual structure of two rather than one frieze drawer, along with the masterfully chosen burr yew and walnut veneers of excellent colour and figuring set off by the feather banded borders, suggests this desk was a special order from a discerning and wealthy patron. It is unsurprising that its exceptional quality and design would have appeal to connoisseurs like the walnut, oak and yew collector John Parry.