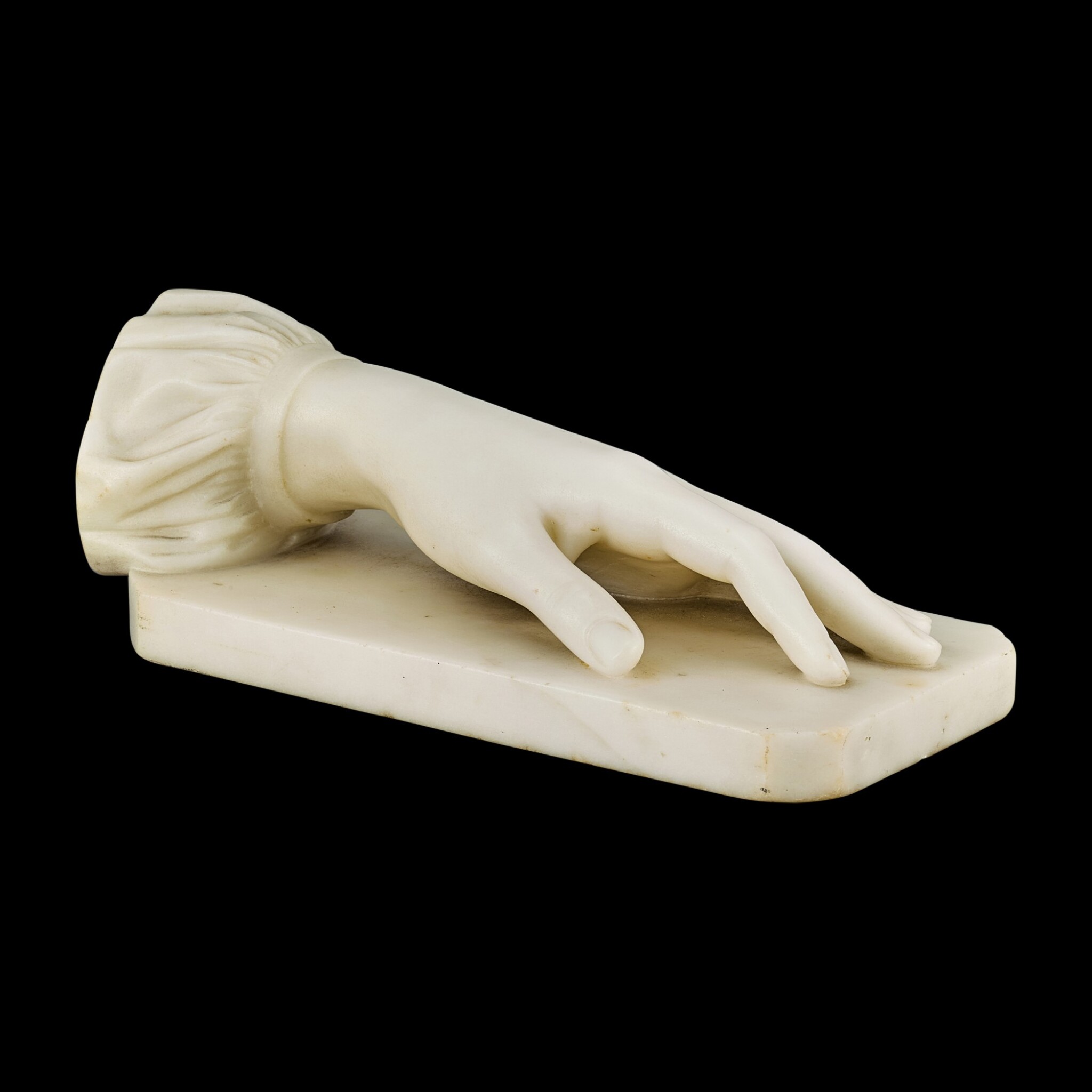 A life-size carved statuary marble hand of a lady with ruffled sleeve, possibly by Alexander Munro (1825-1871) executed as a study of the hand of the artist Henrietta Ward (1832-1924)

Overall good condition with minor flakes to the edges of the base.

Gracefully posed and sculpted, the present hand is likely modelled after that of Henrietta Ward (1832-1924), one of the most successful female Victorian painters of her time.

Born into a family of professional artists, several of whom were fellows of the Royal Academy, her father George Raphael Ward was a painter and engraver, her mother Mary a miniature specialist. Her paternal grandfather was the prominent animal painter James Ward, who served George III and the Prince of Wales, and was related to the great artists George Morland and John Jackson by marriage.

In 1848, Henrietta secretly married Edward Matthew Ward, a well-known historical painter with whom she had fallen in love at a very young age. Despite the sixteen-year age gap and strong disapproval from her family, the couple bore eight children, one of whom, notably, was Leslie Ward, the Vanity Fair caricaturist “Spy.”

As favourites of Queen Victoria and Prince Albert, the Wards were invited back into London from Slough to work on royal commissions. Henrietta did not only paint portraits of the Queen and her children, but also became the children’s art teacher. Some of the most prominent artistic and literary icons, such as John Everett Millais, Charles Dickens, Lewis Carroll, and Wilkie Collins, were also closely connected with the Wards.

Henrietta devoted her life to empowering women, petitioning the Royal Academy to accept talented female artists and backing the women's suffrage movement. After her husband’s death in 1879, she even opened her own art school with an emphasis on training young female artists. ‘Her pupils were of an august kind, such as the Duchess of Connaught, and Princess Louise, Duchess of Argyll and Edinburgh.’1 She continued to exhibit at home and abroad until 1921, when she held her last exhibition at the Royal Academy for the last time. In 1924, the 92-year-old master passed away at her home in Chelsea.

The handwritten label on the finely sculpted hand reads Hand of Matt Ward’s Wife / Carved in Italy 1850, albeit unsigned. This elegant piece is said to be a gift to the sitter from a sculptor friend Alexander Munro (1825-1871), who had known Ward at an early stage of their lives while studying in Italy. As a Pre-Raphaelite artist, Munro was famous for his commitment to naturalism and his simplistic but elegant treatment of his sculptures. He ‘had no rival in the graceful and fanciful treatment of children, [and his] portrait busts of women were distinguished for their refined and delicate sentiment.’2