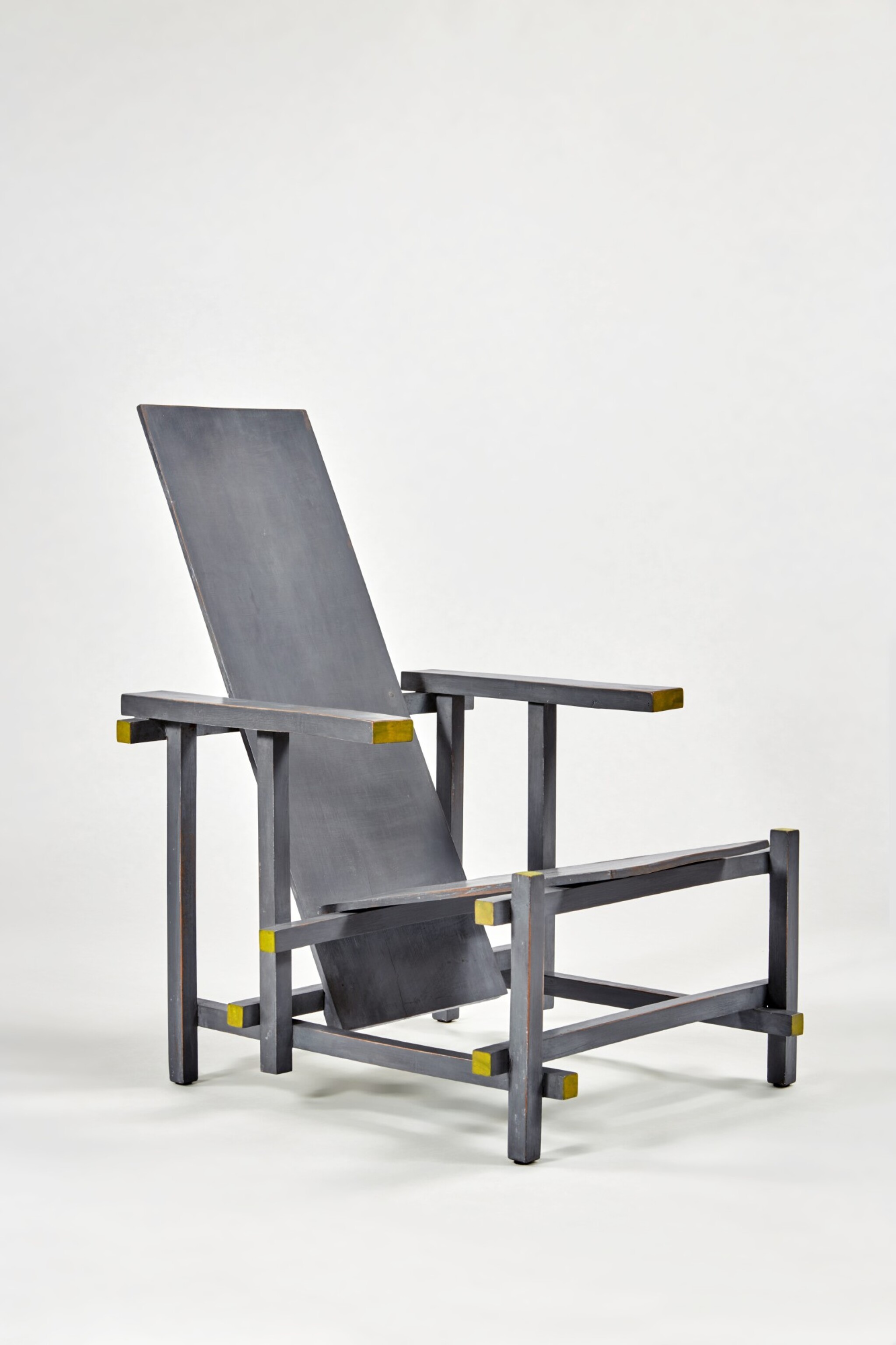 Overall in very good condition. The present “Rood Blauwe” chair is an early example of this iconic form and reveals characteristics entirely consistent with early 1920s manufacture. In addition to the dimensions of the billets, which became progressively thicker over time, the chair features a seat and back delivered from panels of solid wood and with the distinctive rippling to the underside of having been cut on a bandsaw.

The chair is structurally stable and presents with wooden surfaces in age-appropriate condition throughout. Consistent with early manufacture, the seat and backrest both exhibit some very minimal warping to the wood which is not visually distracting and consistent with gentle use and the natural evolution of the medium. The lower edge of the backrest presents with a hairline crack to the wood measuring approx. 9 1/2 in. long, which appears stable. The backrest has been reinforced from the rear, identifying it as one of the few early examples to have retained the original solid boards. The armrests each present with a concentration of fine hairlines, each area measuring approximately 3/4 x 1/2 (proper left armrest) and 1 3/4 x 1 1/4 in. (proper right armrest) which are consistent with age, stable and not visually distracting.

When viewed in person, the chair presents with soft and subtle blue hues to the dominant grey color that add further depth and contrast to the work. The combination of grey and yellow correspond to the original color palette of the chair. Indeed, upon acquiring the work in 2003, the present owner employed a conservator to remove a later layer of pale grey paint that had been applied on the chair at some point before around 1950. On removing this later layer, the present first-generation palette of grey and yellow, as shown, was revealed and subsequently stabilized and restored. The paint exhibits occasional and minor areas of fading, faint discolorations and minute losses concentrated to the edges and corners of the piece which are not visually distracting. The paint has a chalky consistency typical of the hand-mixed paints used by both Rietveld and Toorop, and has been applied with vigorous brushstrokes. The underside of each foot with later protective felt pads.

This early work in undisturbed condition is one of very few early, pre-war examples of the piece that are known to exist, making it a particularly important work by Gerrit Rietveld.

Sotheby’s would like to thank Rob Driessen and Jurjen Creman for their assistance with the cataloguing of this lot.

Gerrit Rietveld’s iconic armchair belongs to a brief yet explosively creative chapter in his development as an architect and designer, capturing the intellectual and artistic tumult of a world now in change. The earliest examples of the chair, shown in its present configuration without side panels, were created around 1920-1921 and the first examples were lightly stained as opposed to painted. In the instances where the original provenance has been preserved, it is evident that these were chairs that were acquired by those friends and colleagues closest to Rietveld’s milieu. The example acquired by the Victoria & Albert Museum in 1989 was one of two that had originally belonged to the architect Piet Elling, whilst that obtained by the Museum of Modern Art, New York in 1983 had formerly belonged to the painter Chris Beekman. The same museum was the first to acquire an example of this important form, having been donated by the architect Philip Johnson in 1953, who by turn had acquired the chair from the Dutch ophthalmologist Gezenius ten Doesschate.

Detailed study of the provenance of further examples, retained in both public and private collections, reveals further evidence of the extreme intimacy with which early examples of these chairs were distributed, with original owners representing the artistic avant-garde of the Netherlands and the De Stijl group. These included the writer Til Brugmans (Rijksmuseum, Netherlands, since 2010), the architect J.J.P. Oud who owned two (one now in the Brooklyn Museum of Art, since 1971), and the painter Jacob Bendien who originally owned the example preserved since 2002 in the High Museum, Atlanta. Other original owners also included the sculptor Steph Uiterwaal, and painters Roelf Jongman and Douwe van Der Zweep. Interestingly, at least two early examples were acquired by clients from outside the arts, including the chair retained in the Stedlijk Museum that was originally owned by the neurologist Frits Grewel, and another, current location now unrecorded, that was once owned by the teacher Pieter Zeilmaker. These latter two examples offer potential for stimulating debate on the evolving relationship between the arts and the study of psychology and behavior that paralleled intellectual thought in the early twentieth century.

The present example must be situated within this important cultural context, a forward-thinking environment that advocated conceptual and aesthetic inquisitiveness. This example was one of two originally owned by the celebrated painter Charley Toorop (1891-1955), and used in the villa that she herself designed De Vlerken, in Bergen. A contemporary photograph records Toorop seated in her chair. An associate of Bart van Der Leck, and of Piet Mondrian, examples of Toorop’s paintings are held in several Dutch institutions, including the Boijmans Van Beuningen Museum, Rotterdam. Her daughter-in-law was the photographer Eva Bensyo, who also owned a grey-painted example of a ‘Red / Blue’ chair, now in a private collection since 2006.

The chair here offered originally came to market in 1989, and retains a direct line of provenance having passed from Toorop to her secretary, Marijke Henneman, around 1950. The chair then entered the collection of the celebrated New York collector Stanley J. Seeger, before being acquired by the present owner in 2003. Until this date, the chair had been covered with a later layer of pale grey paint, which was meticulously removed to reveal the remarkable original palette of grey, with yellow accents to the terminals here shown (op. cit., Kuper & Reitsma, 2012, p. 99). The type of paint here used is intriguing, as it exhibits a chalky consistency and has been applied with broad, energetic brushstrokes, and appears consistent with the hand-mixed paints used by Rietveld, and also by Toorop herself. Evidence of successive layers of paint is common to most surviving examples of this design, as the palette was adapted to suit both environment and personal taste, and moreover, Rietveld himself did not ascribe any absolute value to the use of primary colors on these chairs (op. cit., Kuper & van Zijl, 1992, p. 76).

Technically, this chair reveals characteristics entirely consistent with early 1920s manufacture. In addition to the dimensions of the billets, which became progressively thicker over time, the chair features a seat and back delivered from panels of solid wood, and with the distinctive rippling to the underside of having been cut on a bandsaw. Solid seats and backs were used, as here, on the earliest examples of this form, however they were prone to cracking and warping, and by the mid-1920s Rietveld was utilizing rigid plywood boards on subsequent examples, and replacing the solid boards on earlier examples. To the lower back of the present chair is a shallow crack that has been reinforced from the rear, identifying it as one of the few early examples to have retained the original solid boards. These essential details, together with evidence of a thin black stain as the primary surface to the timber, attest to a chair that would have been executed in the earlier part of the 1920s. All the examples of the chairs executed before 1925 were made by Rietveld himself assisted by three technicians, one of whom was Gerard van de Groenekan and who in 1925 assumed control of workshop production, with Rietveld himself now too busy with architectural projects.