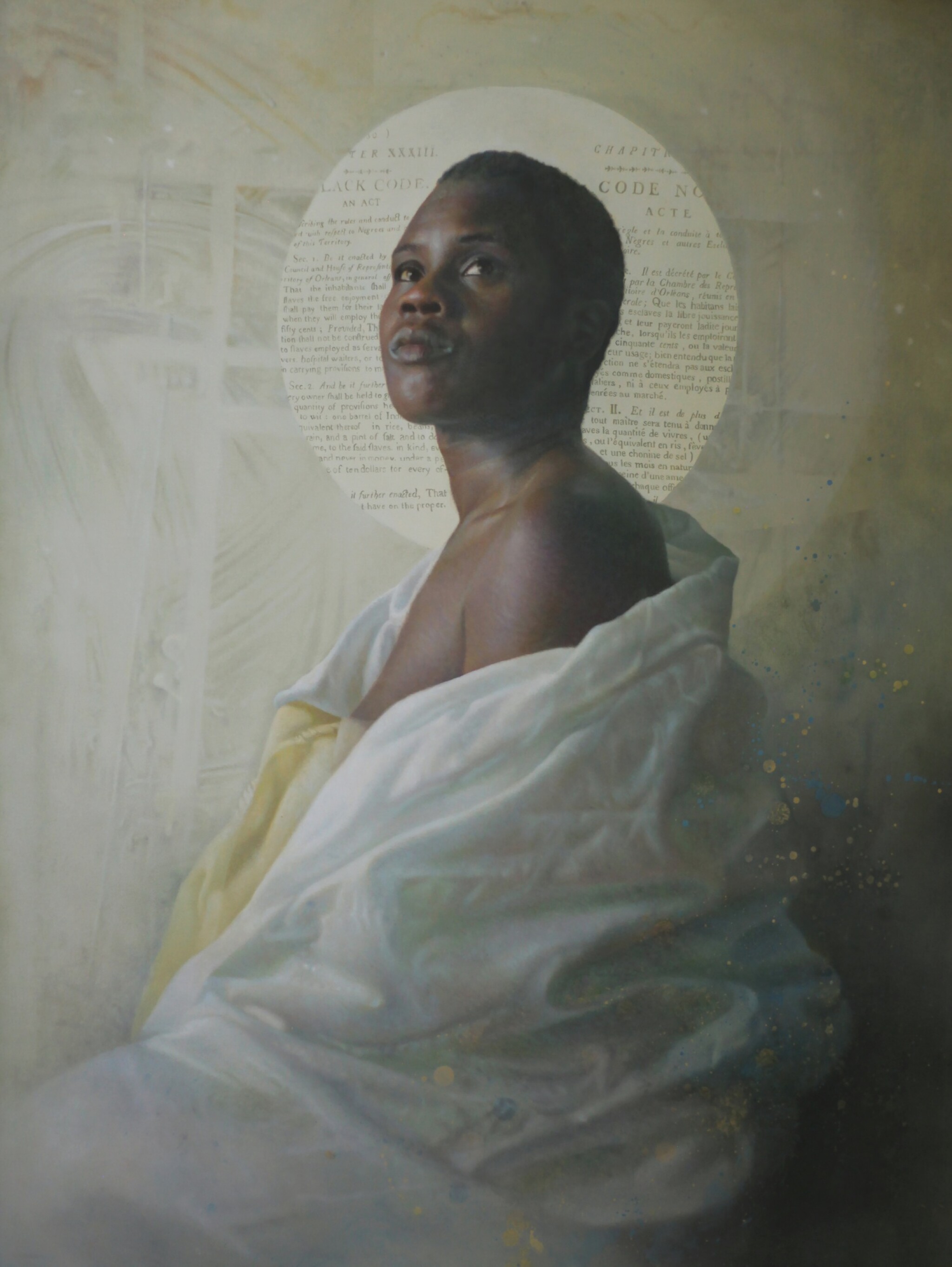 signed; and dated Attié 20 , lower right, and signature, titled and dated 2020 on the reverse

“As a Haitian and Afro-descendant I wanted to paint this picture and symbolically placed an aureola made of an extract from a code noir (black code or "edict on the slave police") to question the imprints of my ancestral unique slavery past. While slavery is a universal phenomenon, the slave trade (from the 15th to the 19th century) is distinguished by three fundamental specificities both in terms of its duration (about four centuries), its legal organization by the political powers of the time (the black codes) and its ideological legitimation (the intellectual construction of anti-black racism), these imprints constitute a major element of my identity and determine my relation to the identity of the other. After all, aren’t we all made of the imprint that remains in us of those who have disappeared?” - Philippe Attie

Born in Seguin, Haiti, (b. 1986), Philippe Attie moved to the United States after a catastrophic earthquake caused devastation to his home country in 2010. He is a contemporary realist artist, now living and working in Florida. His start in the world of art came when he was just 12 years old when he began teaching himself how to paint. By the time he was 16, he gained an apprenticeship with renowned artists, Ralph Allen, and later on, Richard Barbot. In 2005, his realistic art pieces were featured at the Haitian Museum of Art in Champs-de-Mars, Haiti. Along with this, his work has been displayed in the European Museum of Modern Art in Barcelona, Spain, Salmagundi Club, NYC and Rehs Contemporary Galleries in NYC. Following these prestigious exhibitions, the Canadian Le Balcon d'Art, Montréal and Sotheby's LA, have also featured his work for art lovers from all around the world. Philippe continues to practice his passion. His ability to bring ideas and viewpoints to life have earned him achievements such as being an ARC Salon finalist in the International Art Renewal Center Salons from 2013 to 2018. From the same competition, he has also earned a number of awards over the years including: the Rehs Contemporary Galleries Award (2015), an honorable mention and an ARC Purchase Award (2018), a FWSD Award (2019), and the Best Social Commentary with this work of “Imprints” in the 15th International ARC Salon Competition.