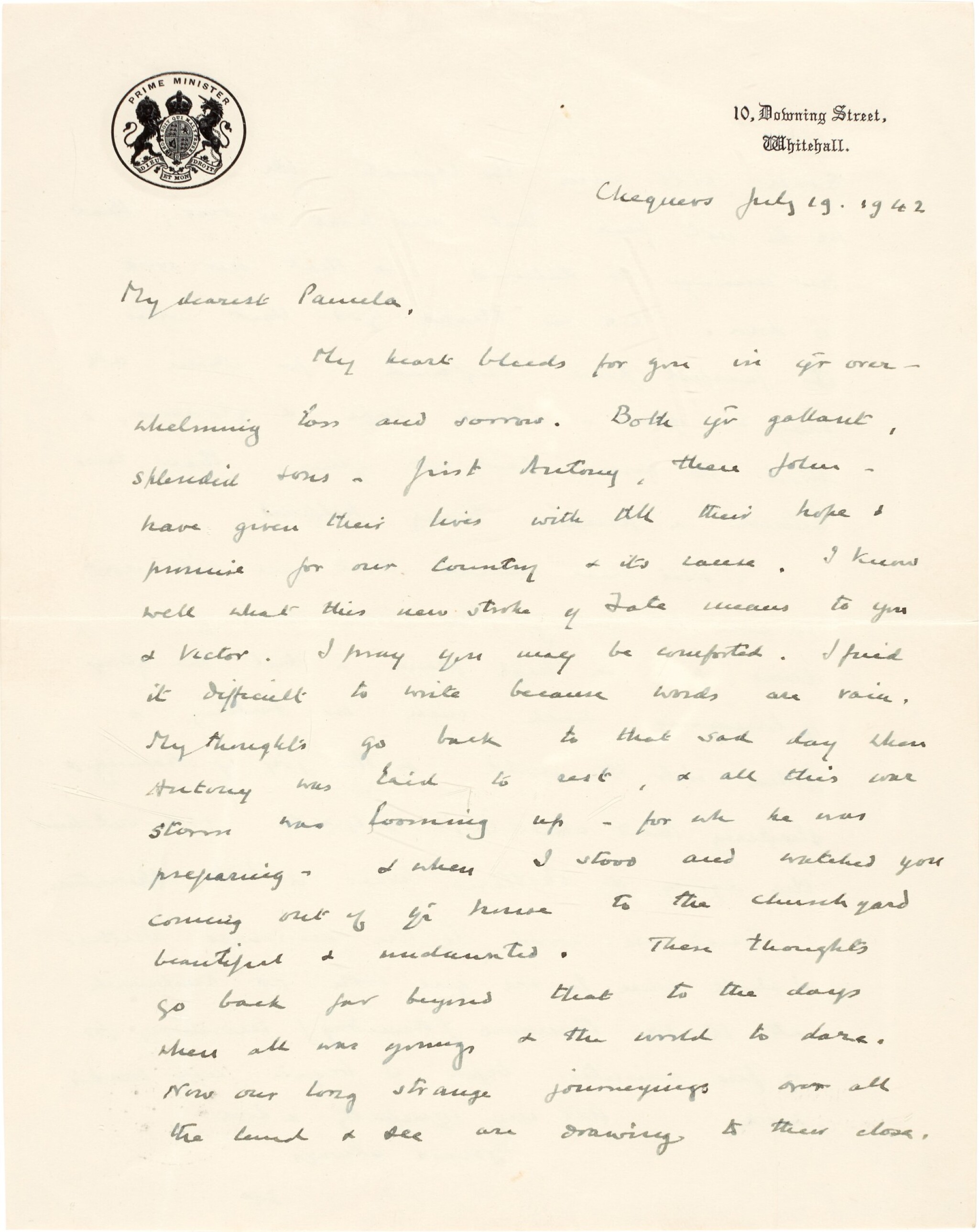 "My heart bleeds for you […] Both y[ou]r gallant, splendid sons […] have given their lives with all their hope and promise for our country & its cause."

a profound letter of condolence to one of his closest and oldest friends on the death of her son in battle during World War II ("...I pray you may be comforted. I find it difficult to write because words are vain. My thoughts go back to that sad day when Antony was laid to rest, & all this war storm was forming up - for wh[ich] he was preparing - & when I stood and watched you coming out of y[ou]r house to the churchyard beautiful & undaunted..."), envisioning the extraordinary sweep of their lives from the time "when all was young & the world to dare" to the present ("...Soon will come the signal wh[ich] we do not fear that our part is over, that our message is delivered & that our work is done..."), offering consolation both in the importance of their efforts to defend their country and also with the hope that in time "the joy of sharing & shaping their childhood & youth will outshine the agony of shattered hopes & bitter separation", 2 pages, 4to, with autograph envelope initialled ("WSC"), Prime Ministerial headed stationery of 10 Downing Street but Chequers, 19 July 1942

"...Let us thank God that after its fearful peril England - for whom all may be offered - stands safe and glorious, & that its heroes have not given their lives without a purpose being fulfilled..."

John Bulwer-Lytton, Viscount Knebworth (1910-1942), was a Major in the Dragoons commanding a squadron of tanks in the 8th Army when he was killed in the desert war at the First Battle of El Alamein on 4 July 1942. He was the only surviving son of the Earl and Countess of Lytton; their elder son, Antony, had been killed in an air crash in 1933 when serving in the Royal Auxiliary Air Force. Their mother, Pamela, was one of Winston Churchill's closest friends: she had been his first love and the two retained a lifelong friendship (two early letters were included in the first Collection of a Connoisseur sale, 15 July 2020, lots 26 and 28). THIS INTIMATE LETTER IS SURELY ONE OF CHURCHILL'S GREATEST STATEMENTS ABOUT THE SACRIFICES OF WAR.