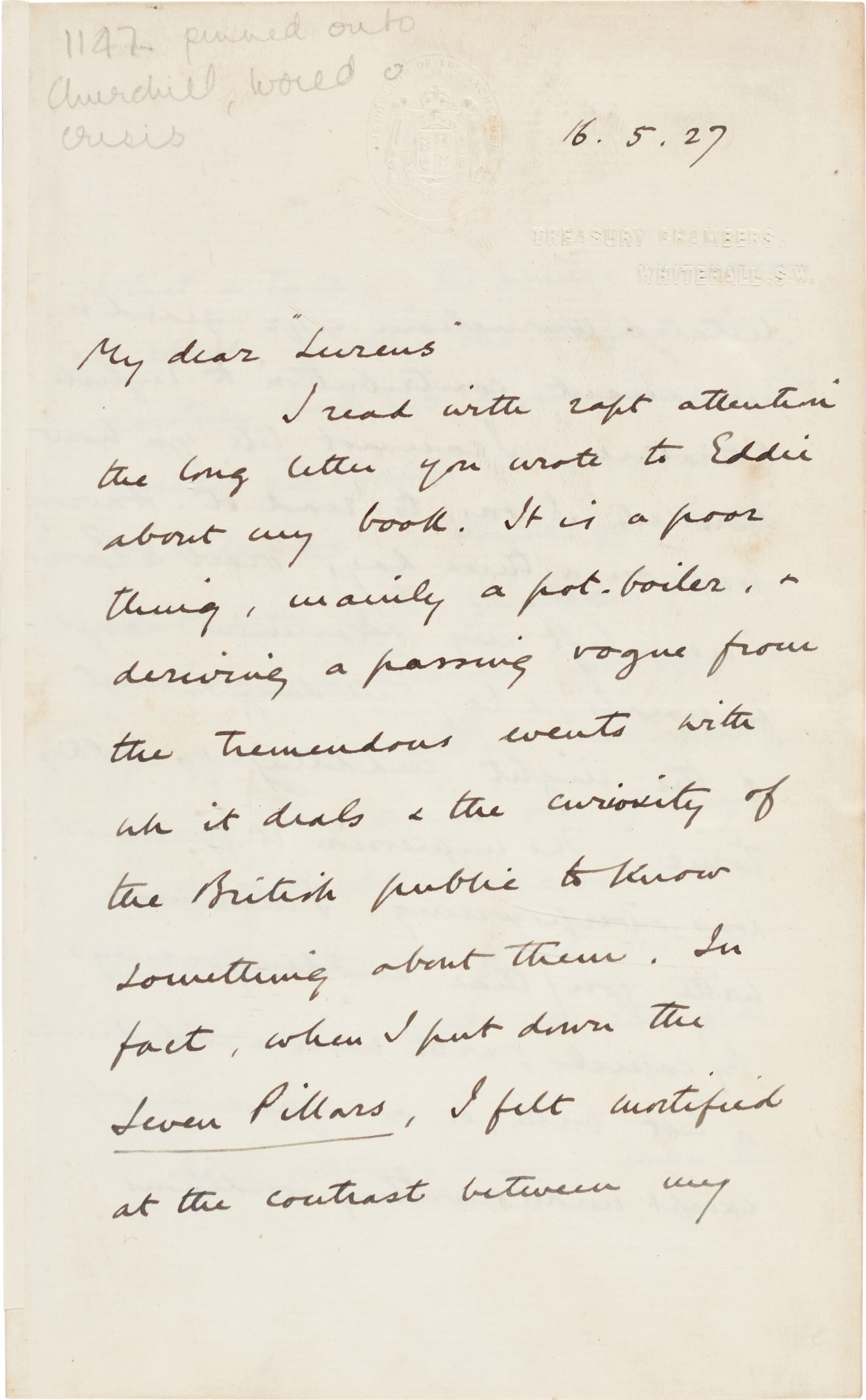 PRAISING SEVEN PILLARS OF WISDOM, contrasting it favourably with The World Crisis, his own ongoing history of World War One ("...when I put down the Seven Pillars I felt mortified at the contrast between my dictated journalism & your grand & permanent contribution to English literature..."), and vividly describing the great impression it made upon him ("...Having gone on a three days' visit to Paris, I never left my apartment except for meals, & lay all day cuddling your bulky tome. The impression it produced was overpowering. I marched with you those endless journeys by camel, with never a cool drink, a hot bath, or a square meal except under revolting conditions. What a tale!..."), thanking him for his inscribed copy ("...one of my most valuable possessions...") and concluding with the hope that he will return to the centre of public events, 4 pages, 8vo, embossed Treasury stationery, 16 May 1927

CHURCHILL'S FIRST REACTION TO THE SEVEN PILLARS OF WISDOM. Churchill was fascinated by T.E. Lawrence. When Colonial Secretary he had employed Lawrence as his special advisor on Arabian affairs, a role which culminated at the 1921 Cairo Conference. Churchill always hoped that Lawrence could be persuaded to return to the heart of public life, and he makes a jocular plea to that effect in this letter ("...Please do not wait until the Bolshevik Revolution entitles me to summon you to the centre of strife by an order 'from the Imperial Stirrup'...") The two nonetheless remained in touch until Lawrence's death, and his chapter on Lawrence in Great Contemporaries memorably described him as one who "flew best and easiest in the hurricane". Churchill was to repeat the high praise that he here gives to Lawrence's prose on future occasions, including in print, but his awareness of the limitations of Seven Pillars as a record of events is also suggested by his comment in this letter that it would "live with Gulliver's Travels & Robinson Crusoe", rather than as a work of history.

The admiration between the two men was mutual; the friendship could never have worked otherwise. Churchill had been happy to subscribe for a copy of Seven Pillars, and the copy he received was warmly inscribed, describing him (somewhat prematurely) as the man "who made a happy ending of this show". Churchill begins the current letter by acknowledging Lawrence's comments to Eddie Marsh in praise of The World Crisis, which he goes on to dismiss as "a poor thing, mainly a pot-boiler, & deriving a passing vogue from the tremendous events with which it deals & the curiosity of the British public to know something about them". On 10 June 1927 Lawrence wrote to Marsh about this "gorgeous" letter from Churchill: "Called his Crisis a pot-boiler! Some pot! And probably some boil, too. I suppose he recalls that he's the only high person, since Thucydides & Clarendon, who has put his generation imaginatively in his debt".