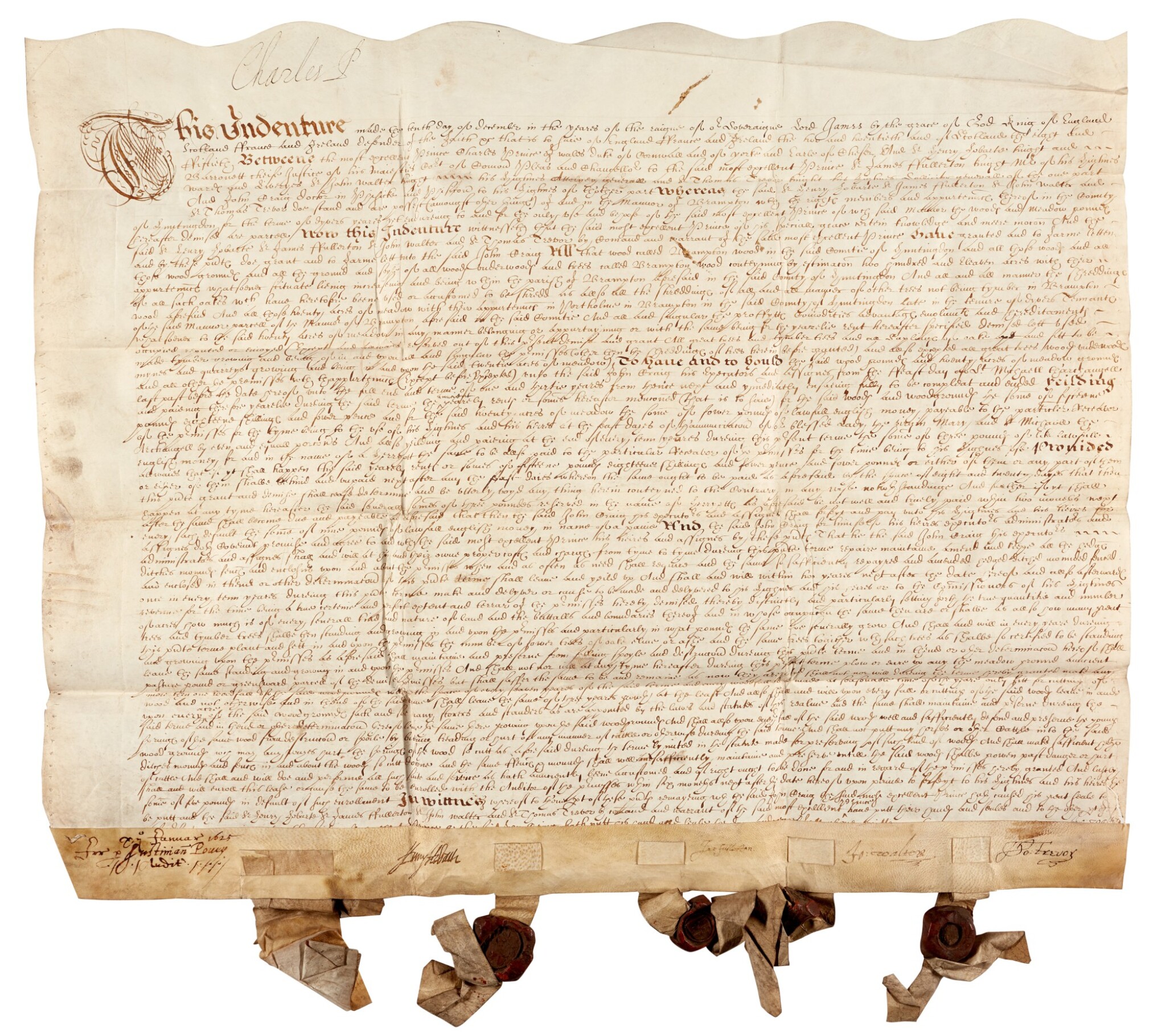 an indenture between Prince Charles and his legal representatives Sir Henry Hobart, Chief Justice of the Court of Common Pleas and the Prince's Chancellor, Sir James Fullerton, "Master of His hignes Wards and Libertyes [i.e. domains and properties], Sir John Walter, the Prince's Attorney general, and Sir Thomas Trevor, his Solicitor General, who hold on the Prince's behalf the manor of Brampton in Huntingdonshire, agreeing to lease to Dr John Craig "All that wood called Brampton wood conteyning by estimacion two hundred and Eleven acres", as well as 20 acres of meadow, for 31 years, for an annual rent of £19 18s. 4d., in a secretary hand with engrossed initial capital, 1 vellum membrane (***SIZE), countersigned at the foot by Hobart, Fullerton Walter and Trevor, with their four pendant seals on original vellum tags, ***PLACE, 10 December 1624

A LEASE OF WOODLAND TO A ROYAL PHYSICIAN. John Craig (d.1655) was one of two physicians to King James I and attended him in his final illness some three months after this lease was agreed. However he got into a furious dispute with the Duke of Buckingham, the royal favourite, over the King's treatment, which culminated in Buckingham driving Craig from the sickroom whilst Buckingham's mother knelt at the King's bedside demanding royal justice against accusations of poisoning. Craig was not to serve at court again until after Buckingham's death.

Brampton Wood, first recorded in the Domesday Book, was part of the manor of Brampton. This manor had been granted by King James to his Queen. On her death he granted it to the Duke of Buckingham but the manor passed back into royal hands when Buckingham exchanged it for other lands. In 1627 the manor was leased to the Earl of Manchester. The wood itself survives to this day. It was badly damaged by the Forestry Commission in the 1950s, who grubbed up ancient woodland to plant conifers, but is today a nature reserve supporting magnificent oaks as well as such rare species as wild service trees, hazel dormice, and black hairstreak butterflies.