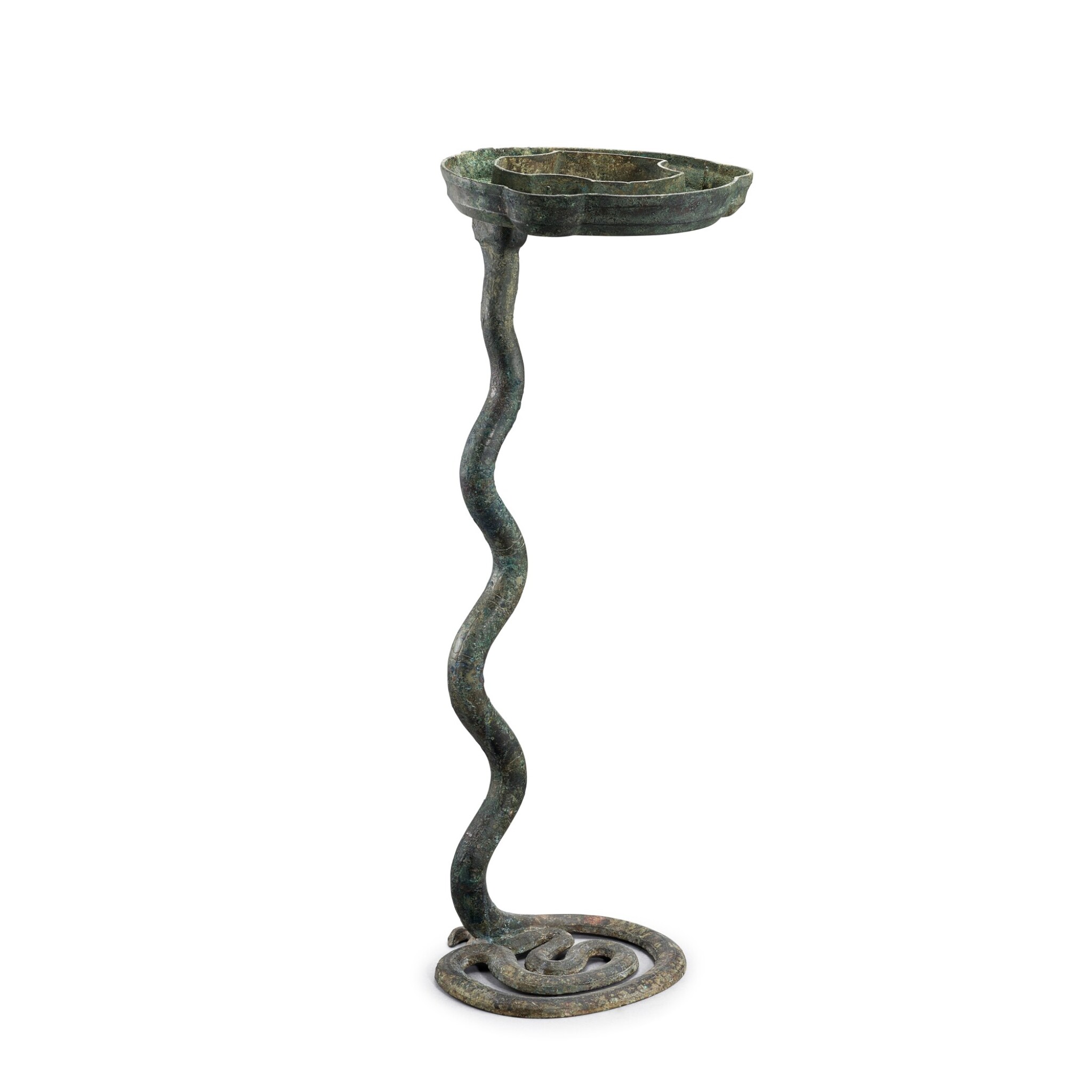 The dating of this lot is consistent with the results of a thermoluminescence test, Oxford Authentication, Ltd., no. C204c75.

Xray images reveal there is a restored break on the upper body and another at the tip of the tail. Otherwise in good condition, with just typical oxidisation. The finely cast details of the snake's scaly body are well preserved throughout.

Snake-form lamps are very rare. Compare a Zhou Dynasty bronze ornament in the shape of a coiled snake in the Musée Guimet, Paris, illustrated in Alain Thote, 'Aspects of the Serpent on Eastern Zhou Bronzes and Lacquerware', Colloquies on Art and Archaeology in Asia, no. 15 : The Problem and Meaning in Early Chinese Ritual Bronzes, London, 1990, p. 152, pl. 3. In his article, Thote explores the importance of snakes as a Chu design element. The complicated interlacing snake design can be seen on the bronze zun and pan from the fifth century Chu State tomb of Zeng Hou Yi, at Leigudun, Hubei province, illustrated in Zhongguo qingtongqi quanji, vol. 10, Beijing, 1998, pl. 137, as well as the painted lacquer inner coffin also recovered from this tomb and illustrated in Alain Thote, 'Double Coffin of Leigudun Tomb No. 1', New Perspectives on Chu Culture, During the Eastern Zhou Period, Smithsonian Institute, Washington DC, 1991, fig. 2.

The snake in the present lot is simpler in design compared to that found in the Zeng Hou Yi tomb, which may indicate that it was made slightly later, but appears to have been influenced by the art of the Chu State.

Han Dynasty lamps of this type are more commonly found as goose-foot lamps. A smaller (47cm) goose foot lamp is illustrated in Eskenazi, Animals and animal designs in Chinese Art, London, 1998, no. 6. Two smaller goose foot lamps in the Shanghai Museum are illustrated in Important Inscribed Ancient Chinese Bronze Vessels in the Li Yingshuan Collection, Shanghai Museum, 1996, nos. 30 and 31, and another from the collection of Dr. David Ho, dated to 33BC, was sold in our London rooms, 3rd November 2021, lot 120.