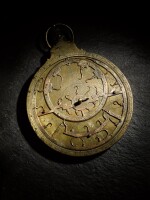 cast brass, hammered and engraved, inscribed in fine Maghribi script, rete with curved, hook-like pointers arising from circular bases (containing silver studs now missing) for about 25 stars and an arc for the Tropic of Capricorn, comprising four plates with the localities Meknes, Fes, Marrakesh, Siljilmasa, Mecca, Tunis and Draa (Dar'a), interior of mater undecorated, with ownership inscription dated 1167 AH/1753-54 AD, back of mater with shadow square, the back of throne with signature and date, replacement pin and horse, plain alidade with two sighting vanes, with suspension loop

The astrolabe with oxidisation and spots of rust, worn, the throne with scratches, as viewed.

Ex-collection Monsieur F, Neuilly-Sur-Seine.
Part of a collection acquired by a family of bankers, scholars and art collectors at the end of the nineteenth and early twentieth centuries.
inscriptions

Engraved in Maghribi script on the reverse of the throne:

Engraved in Maghribi script within a roundel in the upper section of the mater:

The owner of the astrolabe, Muhammad ibn Ahmed al-Qassentini, most probably came from Constantine, in north eastern Algeria, named in honour of Emperor Contantine, during Roman times.

“In Islam, as in no other religion in human history, the performance of various aspects of religious ritual has been assisted by scientific procedures. The organization of the lunar calendar, the regulation of the astronomically-defined times of prayer, and the determination of the sacred direction of the Kaaba in Mecca – these are topics of traditional Islamic science still of concern to Muslims today and each has a history going back close to fourteen hundred years”
David King, Astronomy in the Service of Islam, Variorum, 1993

The Maghrib was the scene of major activity in mathematical astronomy and astrology from the tenth to the fifteenth century, and an interest in traditional astronomy continued there until the early twentieth century. In particular, the construction of instruments – astrolabes, quadrants and sundials – continued into the late nineteenth century.

Muhammad ibn Ahmad al-Battuti was a prolific astrolabe-maker who often worked with Hasan ibn Ahmad (possibly his brother). Together, they represent the last generation of serious and distinguished makers in the Maghrib. The present astrolabe is a fine example of al-Battuti's known pieces. It includes four plates, each with astronomical markings serving Meknes, Fes, Mecca, Sijilmasa, Tunis, Marrakesh and Draa. The latter is an interesting and rarer location to be marked on an astronmical plate, also shared by an astrolabe now in Louvre Abu Dhabi (LAD 2009.027). The Draa (spelt here Dar'a) is the region around the Draa, Morocco's longest river that begins on the slopes of the High Atlas, flowing westwards into the Atlantic Ocean at the south of the country. As a region it is home to one of the oldest of Morocco's Jewish communities, thought to have been automnomous before the Arab conquest.

The present astrolabe is extremely similar to another in the History of Science Museum, Oxford, also dated 1141 AH/1728-29 AD. Although the Oxford example only has three plates, both share comparable decoration, including the simple treatment of the throne. Astrolabes by Muhammad ibn Ahmad al-Battuti can be found in various institutions, including the following:

On Muhammad and al-Hasan al-Battuti see Mayer, Islamic Astrolabists, pp.60-61 and 46. For a history of astronomy in the Maghrib see KD.A. King, 'On the History of Astronomy in the Medieval Maghrib', in Études d’histoire des sciences arabes, Mohammed Abattouy, ed., Casablanca, 2007, pp.175-218. For an ordered list of late Maghribi astrolabes see D.A. King, In Synchrony with the Heavens- Studies in Astronomical Timekeeping and Instrumentation in Medieval Islamic Civilization, vol.1: The Call of the Muezzin (Studies II, pp.1010-12 and 1014-15), Leiden, E.J. Brill, 2004-05.