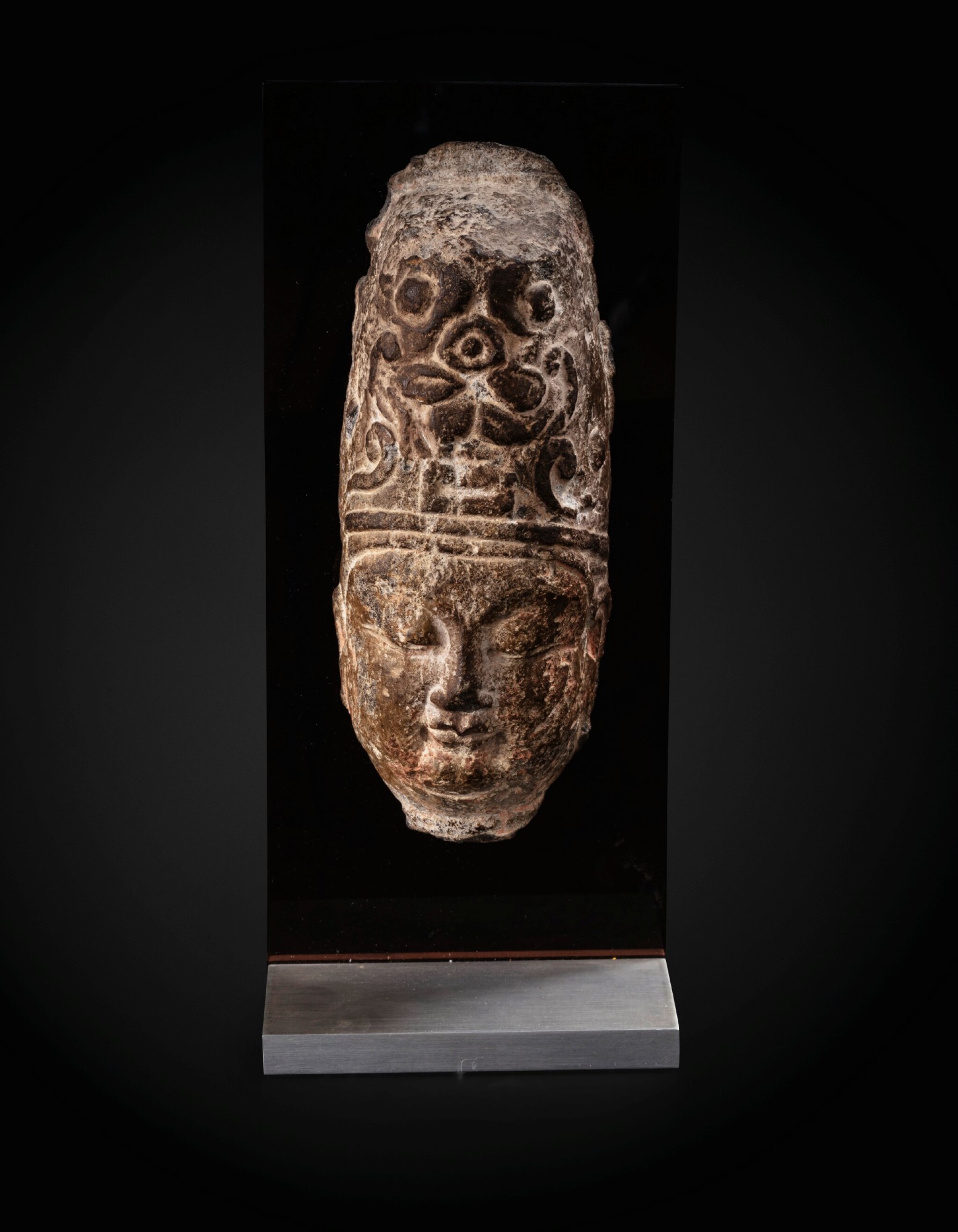 An important fragmentary relief head of an attendant

the fragment carved in soft rounded volume with a relief head, the serene face portrayed with a meditative expression, with slender hooded eyes below arched brows, a straight nose and pursed lips, all framed by long pendulous earlobes and a tall tiara above the hairline, mounted on a wood stand

Very fine lines suggest that the head may have been broken in several places. There is overall wear to the surface, the top of the nose is missing. Traces of red pigment.

A handwritten note by Yvonne Moreau-Gobard dated 9th March 1974 and identifying the origin of the figure as Longmen grotto no. 16, accompanies this lot.

Compare the present fragment with an 'Longmen' relief fragment dated to the 6th century, sold in our Hong Kong rooms, 8th October 2013, lot 111, from the collection of Sakamoto Gorō. Although stylistically related with its tall tiara and facial expression, the present head may probably be dated to the later Sui to Tang dynasty when figures of this type were depicted with less angular carving and a more rounded face. See for example a Sui to Tang dynasty sandstone relief head of an attendant, also from the collection of Sakamoto Gorō and sold in the same sale, ibid. lot 129. Compare as well a limestone wall fragment of a flying apsaras dated to the later Northern Wei period from the Longmen Caves, sold in our New York rooms, 19th-20th March 2007, lot 506, from the Collection of the Albright-Knox Art Gallery.

Whether from Luoyang area, just as from the famous sites near Gongxian, Xiangtangshan, Yungang and Tianlongshan, scattered through north and central China, surviving fragments of peripheral elements like the present fragmentary head are extremely rare, perhaps even more so than those of their accompanying primary Buddha figures.

It is difficult to precisely identify the present divinity from the simple floral design on her tiara, unlike the occurrence of a small bouddha for example which would identify the figure as Avalokitechvara. Yvonne Moreau-Gobard in her hand written note about the present piece identifies it as Shakyamuni's disciple Ananda who in the Buddhist pantheon represents understanding and wisdom while Kasyapa, who is foremost in asceticism, represents practice. However Ananda is more typically depicted as a youthful bare-headed monk and not wearing a tiara. Therefore the present sculpture is more likely to represent another attendant or an apsaras.