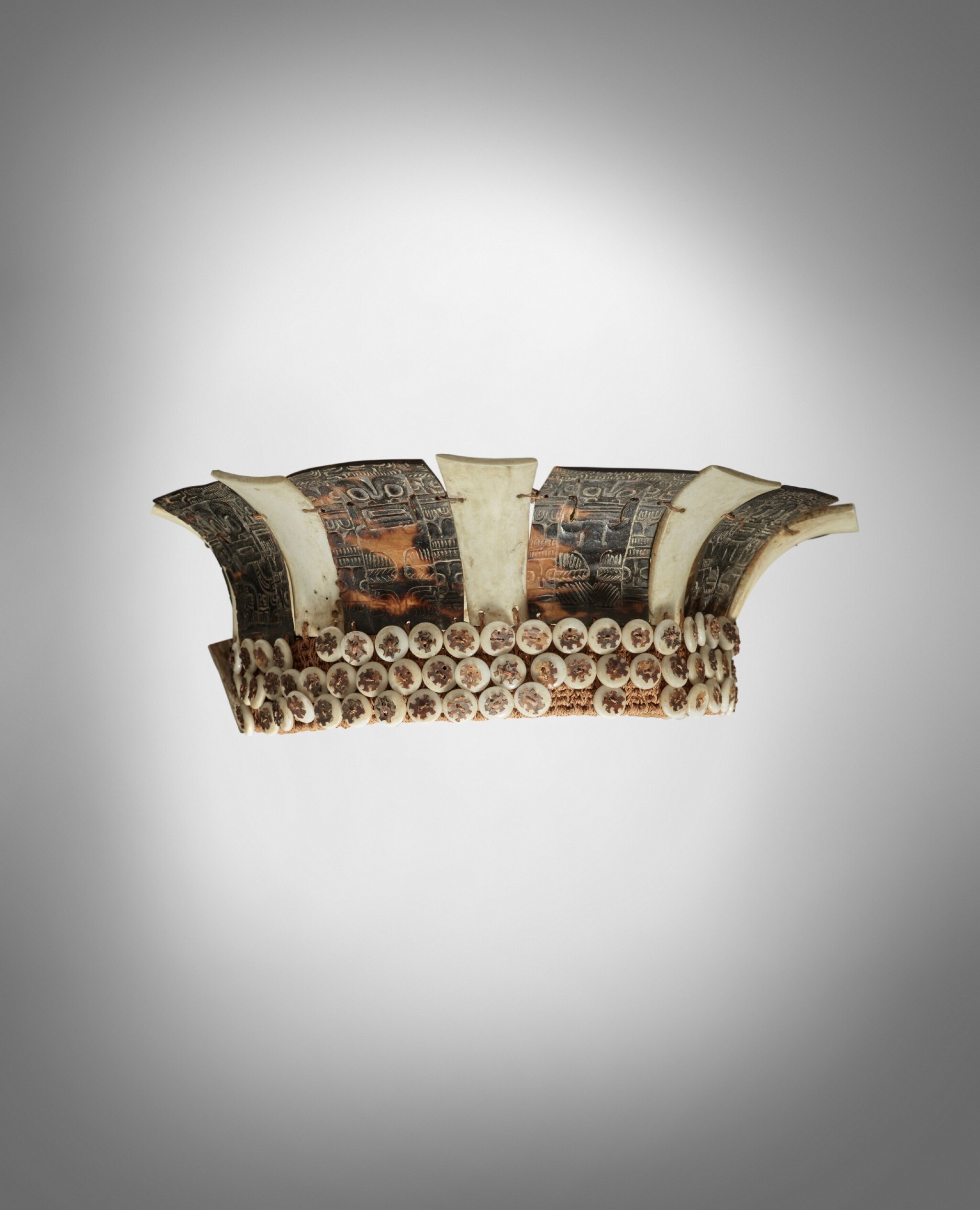 Carol S. Ivory notes that on special occasions, “Marquesans donned a variety of ornaments, including many worn on the head, the most tapu, or sacred, part of the body. The general term for [… a] head ornament is pa'e, and when these take the form of Bands made of woven coconut-husk fiber, or keikaha, they are called pa'e kaha. This term is also used to denote headdresses [...] in which the fiber bands have alternating panels of dark brown turtleshell and white shell attached to them. The ends of the fiber band are ornamented with tapered shell plaques overlaid with openwork carving in turtleshell […]. The turtleshell panels were shaped by wrapping them in noni leaves and heating them in a fire. The turtleshell plaques are carved in low relief and depict tiki […]. Handy attributed the pa'e kaha specifically to the island of Hiva Oa and stated that they were typically part of festival attire. Owned by families rather than individuals, they were passed down as heirlooms. Pa'e kaha were used by warriors and haka'iki [chiefs] and also by male dancers […]. There is some debate about whether pa'e kaha were worn with the panels facing down, like a visor, or standing upright, like a crown. In nineteenth-century illustrations they are shown with the panels down […]. But in his journal, Crook described the panels as ‘joined lengthways, and fastened upright upon a bandange [sic] of coconut fibers to be tied round the head.’ [William Pascoe Crook, “An Account of the Marquesas Islands”, 1800, manuscript journal, Mitchell Library, Sydney, p. 18].” (Eric Kjellgren and Carol S. Ivory, Adorning the World: Art of the Marquesas Islands, New York, 2005, pp. 66-67).

The present pa'e kaha is one of two acquired in 1947 by the French collectors Bernard and Bertrand Bottet from Colonel Guérard, a French military doctor who was in the Marquesas Islands at the end of the 19th century; the other was sold at Christie’s, Paris, June 13, 2011, lot 97.