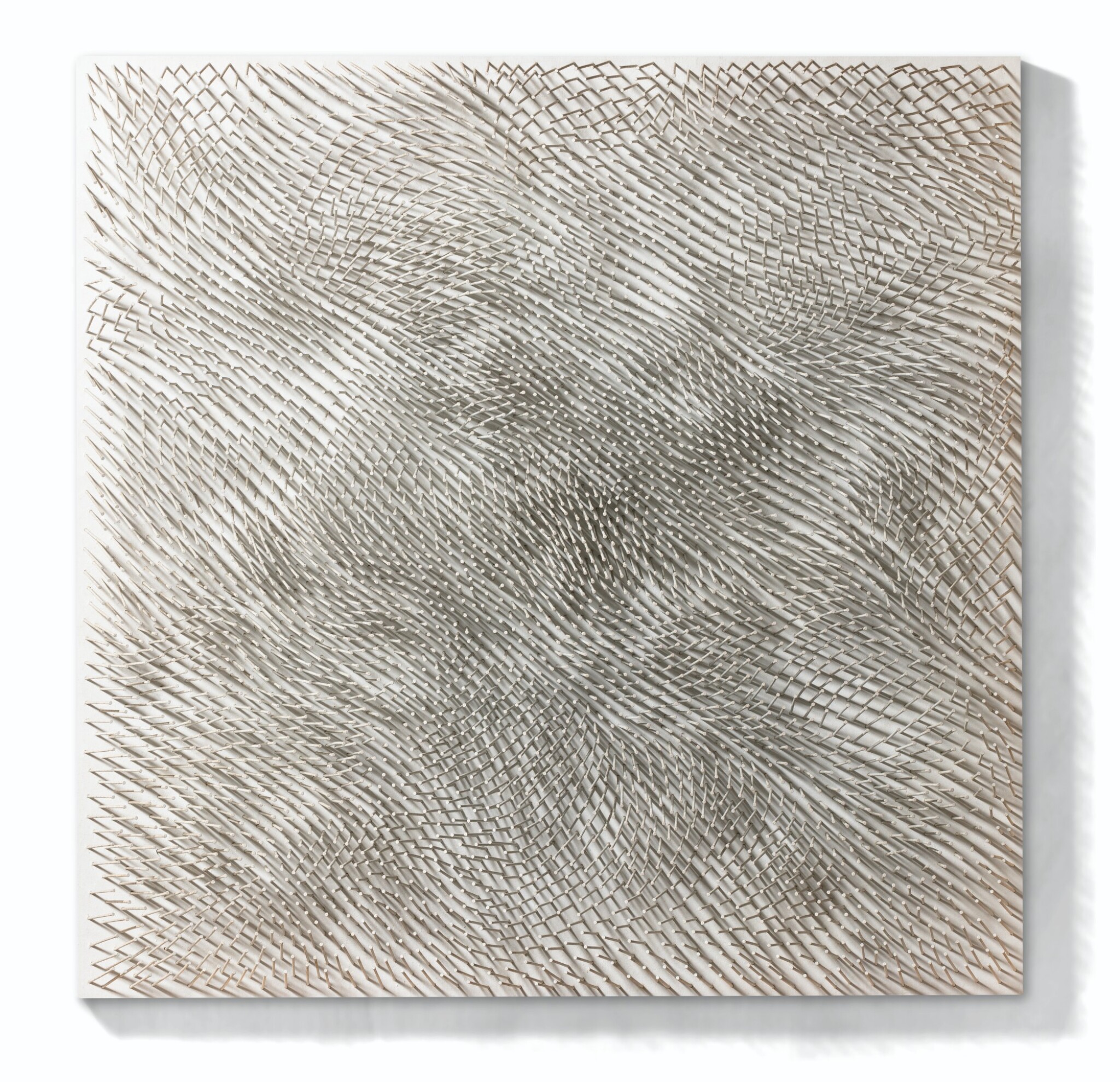 This work is registered in the Uecker Archiv under the number GU.72.003 and will be noted for inclusion in the forthcoming Uecker Catalogue Raisonné.

Acquired directly from the artist by the present owner in 1972

In matters of art, just like in matters of the heart, angels shoot arrows from the sky through the clouds enabling us to experience certain emotions [...]  that allow us to reach existential spiritual certainty.

Weisses Feld (Champ blanc) is the largest artwork (160 x 160 cm) from the most sought-after decade of the artist's career 1960 – 1970, to ever be presented at auction. This masterful piece was executed in 1972, exactly ten years after the inaugural exhibition at the Stedelijk Museum in Amsterdam of the Zero group, two years after Günther Uecker's participation in the Venice Biennale, and four years after the event of Documenta 4 in Kassel. This fundamentally vibrant work is a testament to Uecker's maturity at the time as an artist.

Weisses Feld, which was acquired by the present owner in 1972, has since remained in the same important private European collection. Pierced by an infinite number of nails, the interplay between shadow and light creates ephemeral motifs, contributing to Weisses Feld 's dynamism. The undulations coupled with a seemingly chaotic ensemble become one expertly orchestrated piece of art as soon as it is touched by light, as if the composition were suddenly brought to life.

Initially seduced by a serene white monochrome of swirling movement, with the slightest change in light perspective we are confronted with a superbly dramatic landscape of projecting nails launching towards us. Existing in its own indefinable space between painting and sculpture, Weisses Feld is among the most appealing works by Günther Uecker, and a highly formative exemplar of his legendary use of nails.

Dieter Honisch has described how the artist worked "at lightning speed in a single, uninterrupted action, the results of which he did not see as a whole until the action was completed or brought to an end by sheer exhaustion". (Dieter Honisch in Exhibition Catalogue, Berlin, Neuer Berliner Kunstverein, Günther Uecker: Twenty chapters, 2006, p. 60)

Günther Uecker's encounter with Otto Piene in 1957, and later with Heinz Mack, emboldened him to join the Zero group in 1961. Both artists had a profoundly lasting impact on Uecker's work; "I needed mentors. After the war, I quickly understood artistic expression was rising from decades of separatist ideals which resulted from the geo-political international context since 1920. Encounters with Max Bill, Heinz Mack or Otto Piene had the effect of spiritual ferment. Through our art, we elevated each other: from internal reflection to the expression, formulation or external experimentation of an idea, including visiting each other's studio space, a genuine laboratory for constant animated discussions that kept our intellect alert. Dialogues were friendly and allowed us to benefit from foreign influences from outside of Germany." 1

Uecker was fascinated by Eastern philosophies and pushed himself to reach a spiritual purity and simplicity of form. He invented personal rituals that fundamentally shaped and gave substance to the invisible. Through its purity and absence of association, the colour white was imperative to the Zero mission to start art again from the beginning. As such, Weisses Feld powerfully embodies the quintessential thoughts inherent to Uecker's artistic practice.