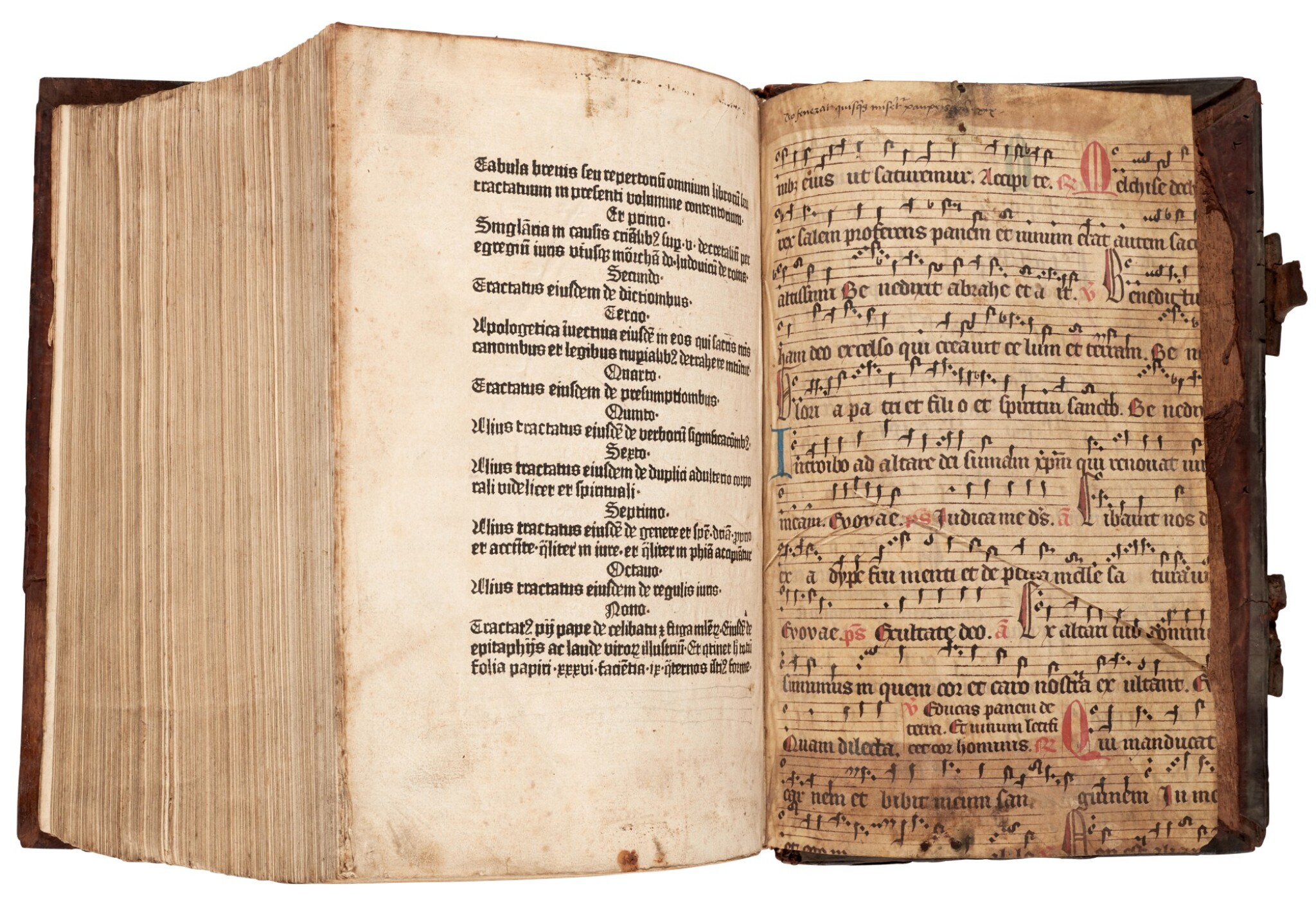 Single sheet, Chancery folio (295 x 190mm.), printed on one side only, binder's waste in the back of the following work:

4 volumes in one, folio (295 x 190mm.), titles printed in red and black within woodcut border, woodcut initials and illustrations, contemporary blind-tooled calf over wooden boards, medieval manuscript pastedowns (lifted) and binder's waste of an early printed sheet bound at end (see below), remains of two clasps, holes from chaining staple at head and foot of lower cover, volumes 1 and 4 lacking title-page, title to volume 3 moved to start of volume, small tear in k1, most of N4 in vol.3 torn away, spine covering torn and defective, covers almost detached

A mixed edition of the homiliaries of Johann Eck (1486-1543), a notable opponent of Luther. This volume is remarkable, however, for the manuscript and printed binder's waste it contains.

The two manuscript leaves in the binding are: (1) Legal text, perhaps a commentary on the Decretals, manuscript in Latin, on vellum [France, 14th century], with running headings T[itulus] xxii and xxiii, including a passage about tithes preceded by a list of its 14 sections, written in two columns of 46 lines in formal gothic bookhand, initials alternately red or blue, one flourished; (2) Leaf of an Antiphonary, manuscript in Latin on vellum [Germany, late 14th or 15th century], with 13 lines of text and music in Hufnagel notation on four-lines staves, initials alternatively red or blue, for Matins and Lauds of the feast of Corpus Christi.

The printed leaf is THE UNIQUE SURVIVING COMPLETE COPY OF THIS TABLE OF CONTENTS FOR AN EDITION OF LUDOVICUS DE PONTANUS BY THE DUTCH PROTOTYPOGRAPHER. The list of nine tracts begins with Singularia iuris and ends with Pius II's De celibatu (actually De mulieribus pravis). It also details the number of leaves and quires of the work, "Et continet h[oc] totum folia papiri xxxvi facientia ix quinternos istius forme".

An article by M. J. Husung in the Gutenberg-Jahrbuch for 1933, "Ein unbekanntes Blatt vom Holländischen Frühdrucker", detailed two fragments of this particular sheet found by him in an octavo binding dated to around 1540, but with connections to Utrecht, which could perhaps be the location of printing. Lotte Hellinga has updated Husung's research ("Max Joseph Husung and his discovery of a fragment of early Dutch printing", Bibliothek und Wissenschaft 29 (1996), 59-69), and again in her Incunabula in Transit (Leiden, 2018), the chapter "Prelates in Print" (pp.230-285), which is a thorough discussion of the texts printed by the presses known as the Dutch Prototypographer and their make-up (pp.262-267 postulates a reconstruction of the contents of this leaf from the fragments including its possible collation). The operation of these presses was unusual as they produced these volumes of somewhat miscellaneous tracts in different combinations and with some formes of type left standing for periods of time. Hellinga surmises that the tracts could have been copied from a manuscript commonplace book with connections to Pius II, which would explain the lack of obvious connections between them, and that this leaf could refer to a compilation that was either never printed or that does not survive.

We are grateful for the kind assistance of Dr Falk Eisermann, Dr Oliver Duntze and, of course, Dr Lotte Hellinga.