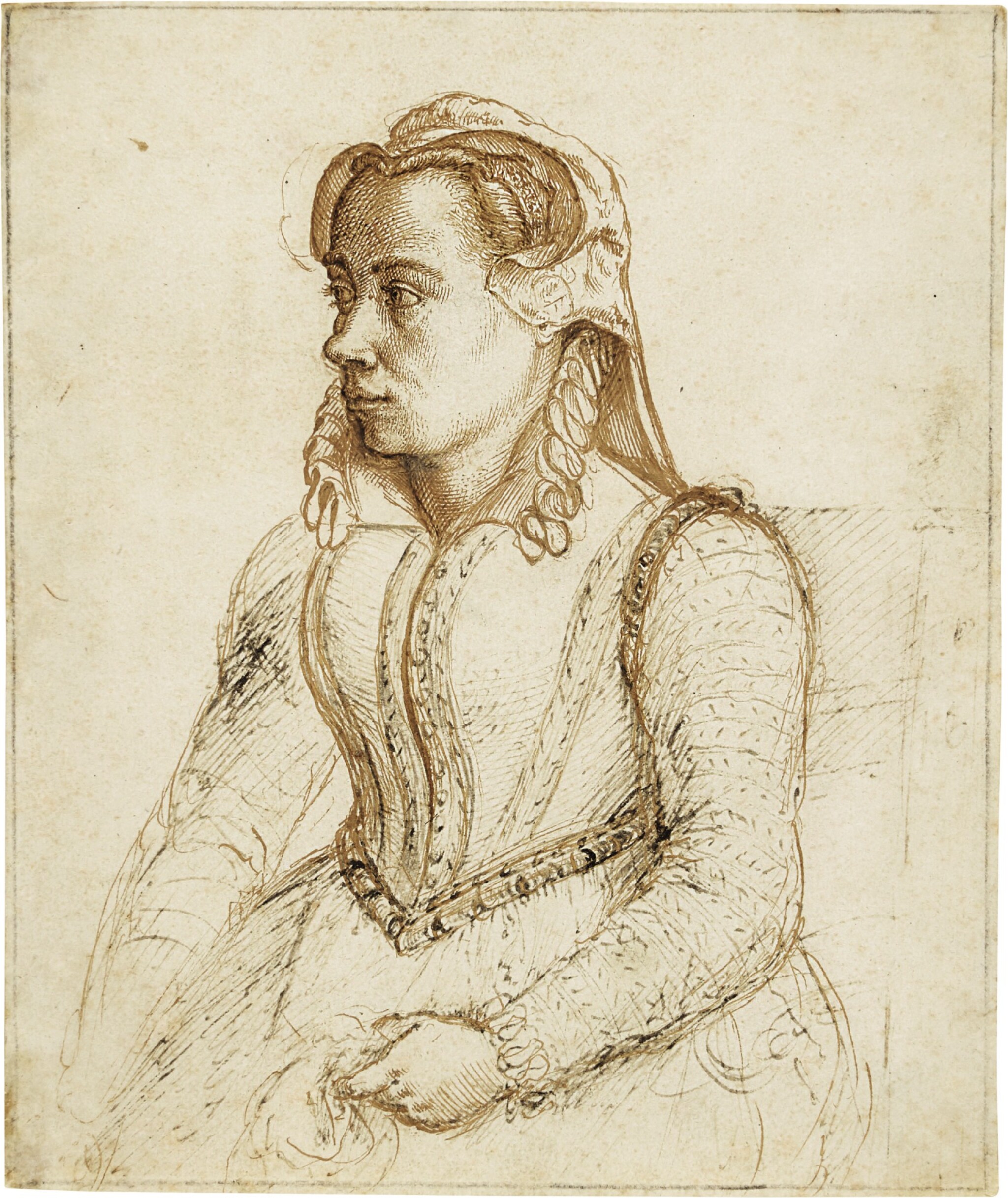 Hinged to mount at top edge. Minor thin areas in paper in all corners, and upper left edge. Some light surface dirt and foxing, but condition of sheet otherwise reasonably good, and ink mostly in very good, fresh condition. Sold in a carved and gilded frame.

Jacques de Gheyn was a central figure in the distinctive flowering of draughtsmanship that took place – in close association with the printmaking industry – in the Dutch city of Haarlem during the last decades of the 16th century. De Gheyn who was born in Antwerp, arrived in Haarlem around 1585, with his initial artistic training already behind him. More or less immediately, though, he came under the strong influence of Hendrick Goltzius, a number of whose drawings he engraved, and this early contact had a profound impact on De Gheyn’s style of drawing. Though he would go on to develop his own brilliantly accomplished and highly personal style, from this point on the legacy of his contact with Goltzius is always to some extent evident in his drawings, whatever their subject or medium.

This intriguing and beautiful portrait of a young woman, looking slightly wistfully to one side, is drawn with considerable confidence, yet also shows signs that the artist was rethinking his drawing as he went along. The anatomy of the head and features are rendered with total assurance and flowing, calligraphic strokes of the pen, and there is a real sense of psychological insight, yet De Gheyn also seems to have revised certain areas, altering the original, lightly sketched profile of the nose and head-dress, and apparently returning to work up the costume in a second campaign of drawing, in which he used ink of a slightly different composition, the colour of which appears to have changed somewhat differently with age, when compared to the ink that the artist used initially.

These features, combined with the fact that there is relatively little evidence here of the influence of Goltzius, led J.Q. van Regteren Altena to conclude, when he first published the drawing in 1936 (see Literature), that it should be considered an extremely early work by De Gheyn, made around the time of his arrival in Haarlem, and before he had come under the spell of Goltzius. No other drawings by De Gheyn can be assigned to that moment with any certainty, but there are a number of similarities in handling with a fine half-length portrait of a lady, possibly the Countess Juliana van Nassau, in the Rijksmuseum.1 It seems, though, that Van Regteren Altena must have remained uncertain as to how exactly to classify the drawing, and when his catalogue raisonné was published, posthumously, in 1983, the drawing was reproduced and discussed in the introduction, rather than the body of the catalogue, as ‘related to young Jacques de Gheyn II’.

Other scholars, however, have maintained the unequivocal attribution to De Gheyn. In a letter written to the buyer shortly after the Tobias Christ sale, the late Professor Egbert Haverkamp-Begemann recorded that, having studied the drawing in the original, he considered it a very beautiful work by De Gheyn, but did not agree with Altena’s extremely early dating, comparing the drawing rather with works of a year or two after De Gheyn’s arrival in Haarlem, such as the 1586 Portrait of Tycho Brahe, now in Copenhagen.2 More recently, other leading scholars have also concluded that Van Regteren Altena’s original opinions regarding authorship and dating appear to have been correct.

The emotional insight, dynamic draughtsmanship and brilliant, free handling that we see in this drawing all point towards the authorship of De Gheyn, a draughtsman who was very consistent in certain aspects of his technique, but who was at the same time highly inventive and original, producing top quality drawings in a variety of media that often differ in surprising ways, one from another. He was also not afraid to combine media in ways that were different from the approach of any of his contemporaries, perhaps most strikingly in the superb sheets of studies of nudes, drawn in a combination of black chalk and pen and brown ink that is unlike the work of any other draughtsman of the period.3

Though it is true that the precise combination of inks seen here is unusual for De Gheyn, all other aspects of the handling, together with the extremely high quality and the overall spirit of the drawing, are entirely consistent with the work of this brilliant and pioneering draughtsman of the early Dutch Golden Age.