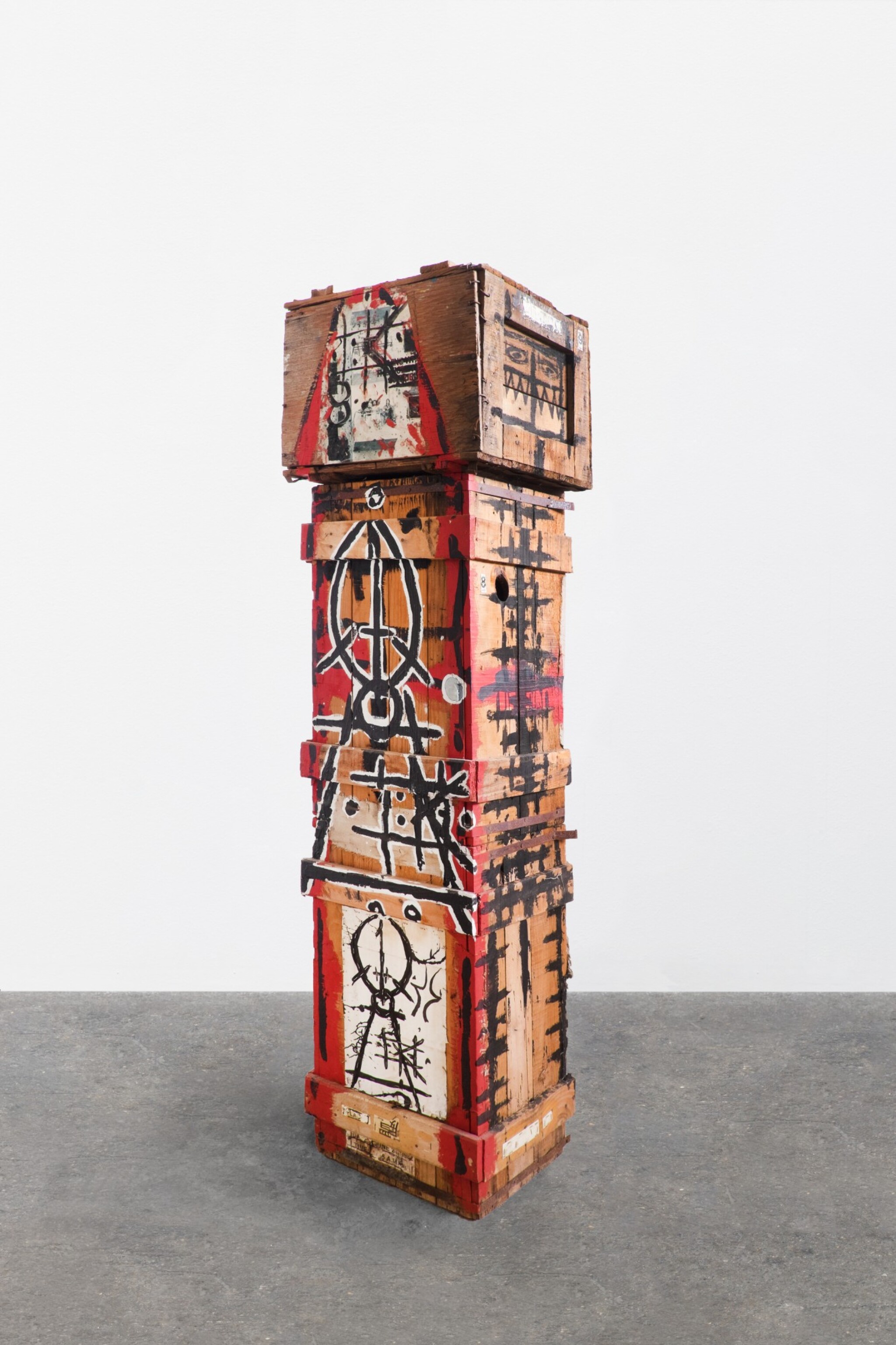 oil, ink and collage on wood

This work is in very good condition. Any surface scuffs, irregularities or colour variations are inherent to the work and in keeping with the artist’s practice and choice of medium.

Please note the colours in the online catalogue illustration may vary depending on screen setting.

The eclectic work of multicultural (Italian-Lebanese-American) artist Douglas Abdell can be organised in 3 key ‘moments’ in his practice: Aekyadic structures/sculptures (1970s-present) Neo-expressionist paintings/totems (1980s) as the work presented here “8 Consolidated Laws 9” is a stunning example; and eventually his Phoenician works (1990s-2000s). They represent a constant progression in Abdell’s fascination with the origins and evolution of written and spoken language throughout the Mediterranean – from ancient Phoenicia to Hip-Hop culture.

Abdell came to prominence in the New York art scene in the late 1970s, during the heady period which also saw the emergence of street art, block-parties and the hip-hop scene. Even if his sculptures were generated in a totally autonomous ecosystem from these trends, the cultural landscape of the time is apparent in works by Abdell of this period, notably the Aekyad sculptures which were installed on Park Avenue in 1979: imposing black structures, suggesting the ecstatic speed, electricity and deft geometric movements of the underground cultures of the time.

By 1983, the year of the work present “8 Consolidated Laws 9”, New York had become a ‘laboratory’ for Abdell and the substantial permanence of the steel Aekyad sculptures began to give way to work created from salvaged ‘junk’ materials, including posters, packaging and newspapers scrounged on the neighbouring Latino and Chinese streets – all mixed up with postcalligraphic and esoteric painting. The resulting ‘Neo-Expressionist’ painting-collages and totem sculptures are a melting-pot of language and visual culture – but also a blending of dramatically different environments; the street, the gallery, the studio, the archaeological site, the hip-hop party; Chinatown and the ruins of Baalbek all appear in these works.

In 1984 Abdell published his wild lettrist and numerological manifesto, MIRROR MAGNETIK INTERVAL (a collaboration with his partner at the time Begonia Korta-Zaharra) unveiling his theories between esoterism and humanism. Meditating on the emancipation of numbers and letters, just as the totem sculpture shows off the numbers 8 and 9 to perform the symbolism of infinity, Abdell comments:

The sickness of our time is that we are educated to separate rather than connect. Be it, for example, with numbers (mathematics, chemistry, physics) or letters (philosophy, literature, art)…I will never be able to study a number without thinking of it as an expanding function, or forgetting where it comes from and where it’s going. The principle of motion is connected to everything. Nothing exists without a relation to something else.

Douglas Abdell (USA, 1947) Lives and works in Málaga, Spain. Born in Boston, MA to an Italian mother and Lebanese father, Douglas Abdell is a sculptor who also produces paintings, drawings, engravings, and tapestries dominated by writing and graphic signs. His work explores the deep bond between words, images, sound, and form in intimate and political subjectivity. The artist believes that this link has been particularly close and significant in the ancient languages, now extinct, once spoken in his family’s countries of origin: Phoenician and Etruscan.

This entry was written by Morad Montazami, Director of Zamân Books & Curator.