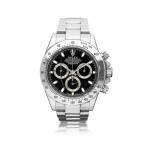 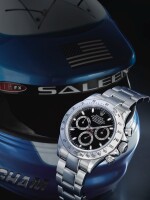 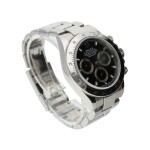 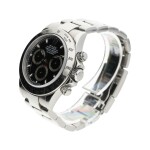 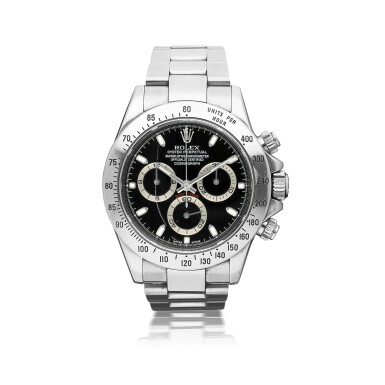 Case in good overall condition with surface wear and scuffing consistent with age and previous use. Lower right lug with a small nick. Lugs and bezel throughout with light scratches. Case back is personally inscribed "2001 GTS Champion Chris Bingham" with the Grand American Sports Car Series logo. Bracelet with equivalent wear and visible scuffs throughout. Crystal glazing with a visible scratch to toward the center.

Chronograph operating. The movement is running at time of cataloging, however it was not tested for the accuracy of time or duration of the power reserve and may need service at the buyer's discretion. Please note that Sotheby's does not guarantee the future working of the movement.

Christopher "Chris" Bingham (born December 15, 1971) is an American professional racing driver from Kirkland, Washington. He is a noted sports car driver but also competed in stock cars, with eleven Busch Series starts and one ARCA start in his career. Bingham began his professional racing career with four Indy Lights starts in 1997 and participation in the 24 Hours of Daytona in a GT3-class Porsche. He returned to Daytona and made his 12 Hours of Sebring debut in 1998, and in 1999 and 2000 Bingham drove for the Hybrid R&D Riley & Scott-Ford Le Mans Prototype team in the American Le Mans Series. In 2001 and 2002 Bingham drove the works Saleen S7R in the ‘Grand-Am Series' GTS class to back to back championships, including 11 class victories. Not only has Bingham won multiple races, but he has also competed in 14 Rolex 24 hours of Daytona events and LeMans 24 hours.  The Rolex Sports Car Series was the premier series run by the Grand American Road Racing Association. It was a North American-based sports car series founded in 2000 under the name Grand American Road Racing Championship to replacing the United States Road Racing Championship with Rolex as series title sponsor. The championship ran a mixture of classes of sports prototypes and Grand Touring and debuted their custom prototype chassis, known as Daytona Prototypes, named after their premiere event, the Rolex 24 at Daytona.

Rolex has a long and storied relationship with motorsport. In the 1930’s, Sir Malcolm Campbell usually wore a Rolex during his nine-world speed record in the 1930’s, including five times at Daytona Beach, Florida. As he wrote to Rolex in a letter from that time, “I have now been using my Rolex Watch for a while, and it is keeping perfect time under somewhat strenuous conditions”,

Rolex first became the official timekeeper of the Daytona raceway in 1962, a year before the release of the Ref 6239 ‘Daytona’ chronograph’ a watch specifically designed for racers with its tachymeter scale prominently displayed on the watches bezel.

As multiple Rolex winner Scott Pruett said “When you consider all the time, effort and energy that goes into trying to win, it is completely consuming, and a watch is a symbol of this commitment. If you win a trophy, it sits in your trophy case. However, when you win a Daytona, with “Winner” engraved on the back, there’s nothing more special.

“There’s no current driver or past driver who wouldn’t say the most memorable thing you can take away from this race is the watch.”

This is a unique opportunity to acquire a Rolex Daytona winners watch. The Rolex Daytona Ref 116520 first launched at Baselworld in 2000 and was Rolex’s first Daytona to feature a movement entirely made in-house. The full integrated, self-winding chronograph Cal 4130 replaced its predecessor, the Zenith based Cal 4030, and after five years of development and refinement, was more efficient, robust, serviceable and accurate than its predecessor. Presented to Chris Bingham after his championship winning season in the Saleen S7R in 2001, and complete with its box, outer packaging, papers, hang tag, cloth, and uniquely with the case back engraving honoring the championship winning season. In addition, the lot includes the championship winning race helmet that Bingham wore that season.