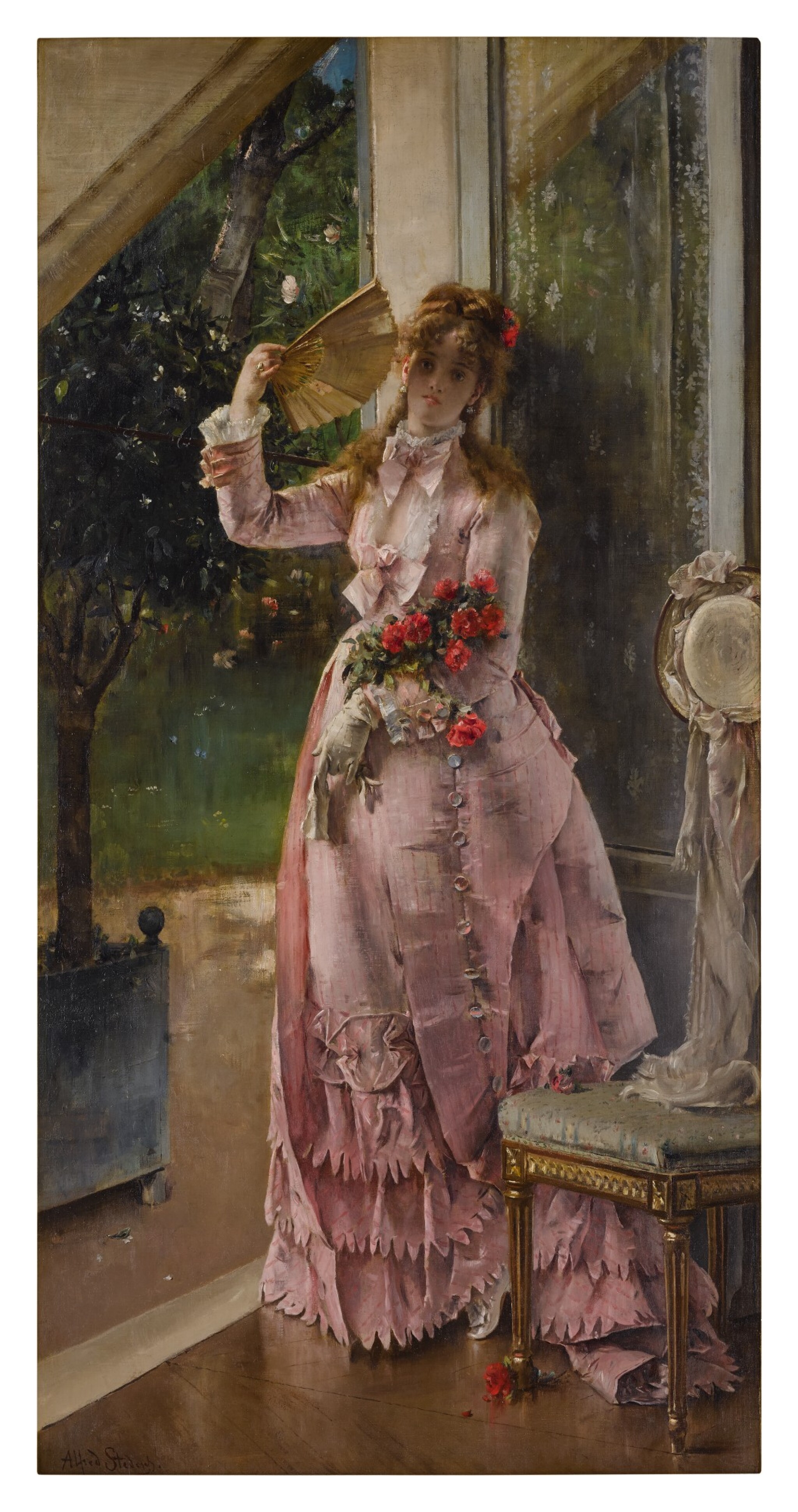 This painting will be included in the catalogue raisonné of Stevens' paintings now in preparation by the Comité Alfred Stevens.

The following condition report was kindly provided by Simon Parkes Art Conservation, Inc.: This work is in excellent condition. The canvas is unlined. It is stretched on an old if not original stretcher. The paint layer is clean and varnished. There are no retouches in the landscape behind the figure or in the architecture. The face and hands are unretouched, as is the ground on which she stands. Small retouches have been added in the pink dress in a few spots around the buttons, and at the bottom of the dress. These retouches do not seem to address any actual damage to the paint layer, and they are likely to be cosmetic in nature. The work should be hung in its current state.

In 1866, King Leopold II of Belgium commissioned a set of allegorical paintings of the four seasons from Alfred Stevens. While Le Printemps was completed in 1869, the remaining seasons were not realized until 1875-6 (each measuring 53 ¾ by 16 ½ in.; 139 by 42 cm and now held by the Collection Royale, Belgium). In 1877, a second, slightly smaller series (46½ by 23½ in.; 118.4 by 59.6 cm) was ordered by wealthy Belgian industrialist Arthur Warocqué (1835-1880) for his mansion on the Avenue des Arts in Brussels (now held by The Sterling and Francine Clark Art Institute, Williamstown, Massachusetts).

While there are known versions of individual pictures in the series, including Reveries, a variation of L’Automne in the Philadelphia Museum of Art, the present work may be a variant on the depiction of L’Éte created for Warocqué, as it is the same size and features the same mid-nineteenth century lyre back chair, as opposed to the tufted Louis XV stool seen in the larger version commissioned by King Leopold. Stevens conveys the heat of the summer season by bathing the scene in golden late-afternoon light. Armed with a fan à la Japonsime, the elegant moderne resists the powerful heat of the day while seeking cool in a shaded doorway to a radiant outdoor garden. She further personifies the season through the vibrant bouquet of freshly picked roses that rest in her arm and decorate her hair.

Stevens conceived the set of four seasons as a complete allegorical campaign within an interior decorative scheme. In each individual season, he jettisoned the traditional allegorical depictions of the seasons to present individual representations of fashionably dressed women. The press immediately recognized Steven’s innovation, boasting that the artist’s conception would preclude “banal mythological allegories” in favor of “four female figures of different ages and wearing costumes that are dictated by the state of the landscape through which they are passing” (La Presse as translated and quoted in John House, catalogue entries for no. 319-322, in Nineteenth Century European Paintings at the Sterling and Francine Clark Institute, Williamstown, Massachusetts, 2012, p. 769).

As House further explains, the background of each season has a “triple function” in representing the season, the times of day, and in complementing the implied narrative (p. 769-70). Le Printemps has the cool, early light of morning, the budding flowers and dove suggesting a beginning love affair; L’Été shields herself from the warmth of the bright sun, holding an abundant bouquet suggesting a suitor, and L’Automne is dressed against the chill of the season and reads a book in solitude -- hinting at a waning love. The sequence is aptly summarized by the Belgian writer Charles Lemmonier, who described Les Quatre Saisons in 1877: “the first hopes, the second, loves, the third regrets, and the fourth has the sort of vague… virginity of winter” (as translated and reproduced in the Sarlin catalogue, p. 60).