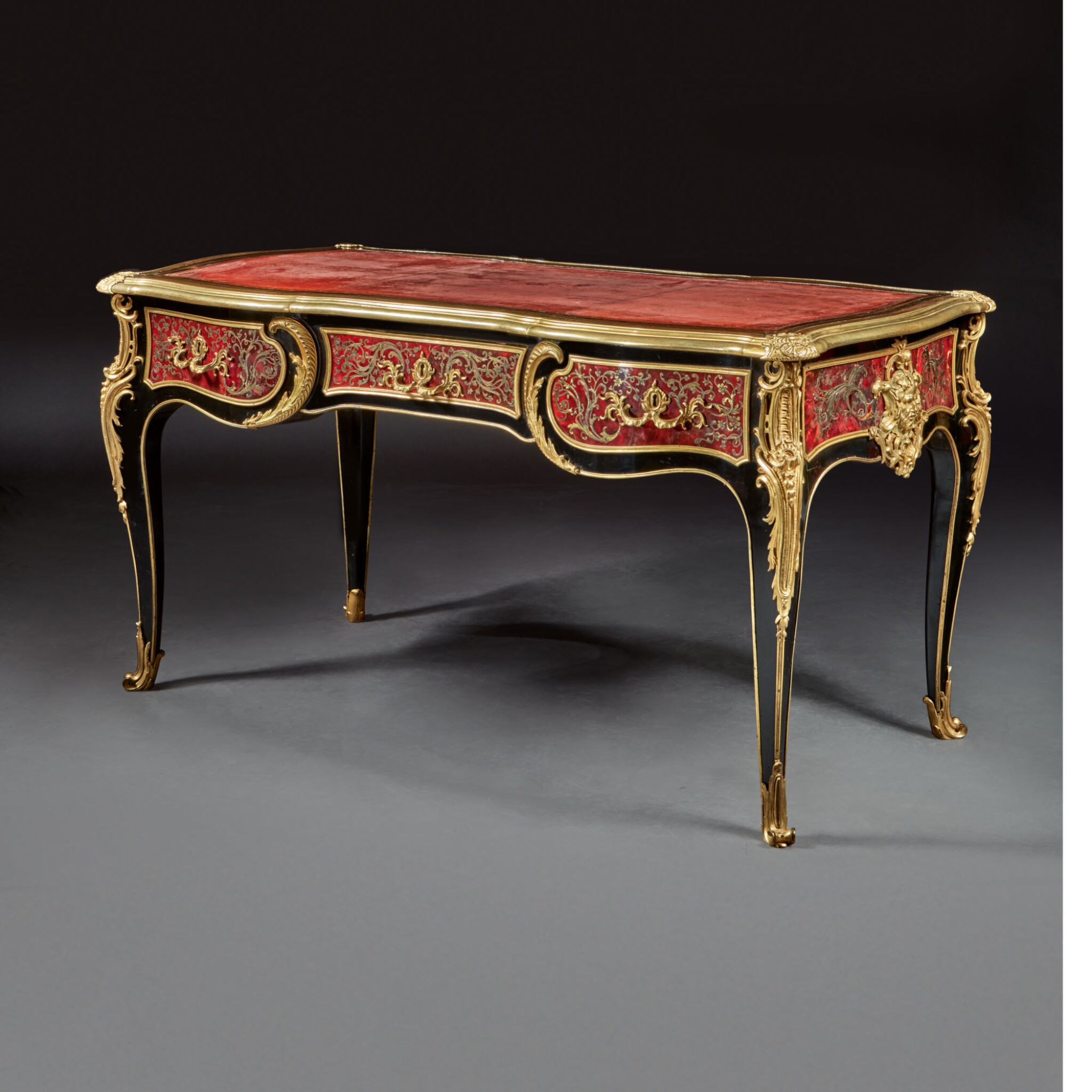 the underside of the top inscribed in black paint MDCCXLIV.LATZ.FECIT, also with scoring marks and indistinct incised letters

Jean-Pierre Latz was born near Cologne and settled in Paris in 1719, an early example of what would be a pronounced trend of German craftsmen emigrating to France in the 18th century and playing a pivotal role in the development of the Parisian furniture trade. In 1736 he became a naturalized French subject and three years later wed the daughter of a wealthy property developer. Sometime before 1741 he received the appointment of royal cabinetmaker (ébéniste privilégié du roi), and he was based in a house at the sign of the Saint-Esprit in the Rue du Faubourg Saint-Antoine until his death. Although he had some important French clients including the Duc de Penthièvre, Latz exported a significant quantity of his work to patrons outside of France, including Louis XV's daughter in Parma, Frederick the Great in Potsdam and notably the Saxon court in Dresden.

Like his contemporary BVRB, Latz is regarded as a major proponent of the mature Louis XV style in furniture design, and shared his skill in exploiting well chosen tropical wood veneers, floral marquetry, bold sinuous outlines and rich gilt bronze mounts for maximal decorative effect. Unlike BVRB however, Latz continued to employ Boulle marquetry, particularly on cases for bracket and tall-case clocks, which represented a significant proportion of his production. Latz was also never a member of the Paris cabinetmakers guild and was technically free to design, cast and chase his own bronze mounts in-house, many of which were unique to his production and serve as an aid to attribution. In this he is similar to another of his Paris colleagues Charles Cressent, and like Cressent, Latz was subject to a seizure of his models by the Paris bronziers guild in 1749.

Not being received into the guild may explain why Latz stamped his work infrequently, and may offer some insight into the unusual presence of Latz's signature painted on the underside of the desk top (Hawley, p.215) [Fig.1]. The underside is also noteworthy for the presence of the original incised 'cabinetmaker's triangle' marks meant to indicate the correct orientation of multiple joined boards, a practice still in use today. A further unusual aspect of the top is that it is not attached to the case by screws or dowels but rather has a series of hooks along the border that slot into designated grooves on top of the rails, a construction technique that would appear to be unique to Latz.

Interestingly, the tall case clock by Latz in the Cleveland Museum of Art [Fig. 2] is incised on the lower back panel LATZ.A.PARISIIS.FECIT.MDCCXLIV - the same date as on the Zilkha bureau, and it is tempting to think Latz was working on both pieces at the same time. The case of the Cleveland clock is in première partie Boulle marquetry in a arabesque and flowerhead design typical of Latz and similar to the inlay on the Zilkha writing table, which is likely a later replacement of original marquetry of comparable design whose condition had deteriorated irretrievably.

The offered lot is the only known bureau plat by Latz that is signed. A small group of desks attributed to Latz of related form and with identical or similar bronze mounts are recorded; the closest example is a bureau plat from the Paul Dutasta collection in floral marquetry, of identical size and virtually identical mounts including the masks on the sides, sold Sotheby's New York, 3 June 2008, lot 92 ($1,202,500) [Fig.3]. Another comparable desk in floral marquetry with different side masks was sold Sotheby's Monaco, 25 June 1984, lot 326 (illustrated Pradère, p.158 fig.132) and a further version is illustrated in Kjellberg, p.534 fig.b. Identical chutes appear on a desk attributed to Latz in the Wallace Collection (F112), as well as on a bureau in the collection of the Dukes of Bedford, Woburn Abbey (Hawley no.29, pp.238-9).