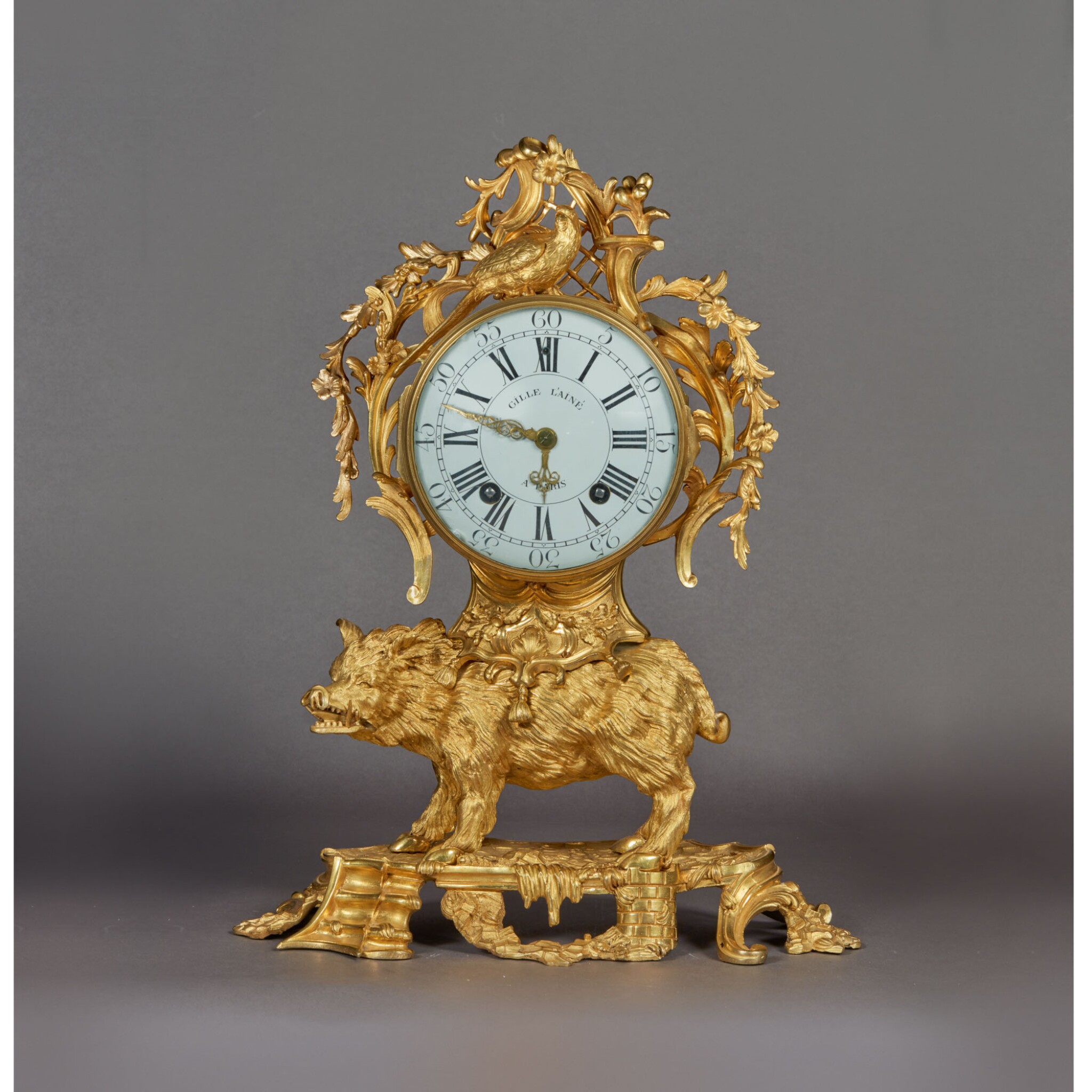 in the form of a wild boar, the clock drum surmounted by a budgerigar; the enameled dial signed GILLE L'AINE A PARIS; anchor escapement with silk suspension, hour striking with horizontal hammer

The gilt bronze with some minor surface scratches, casting flaws, surface dust, and rubbing, as to be expected. Please note Sotheby's does not guarantee clock movements.

Non-invasive XRF testing of the base indicates an alloy composition consistent with bronzes produced in the 18th century.

The taste for exoticism in 18th-century French decorative arts was marked by an interest in the animal kingdom, and this was particularly manifest in the design for clock cases, which incorporated elephants, rhinoceroses, wild bulls and lions. Wild boar are less frequently encountered, although it was a subject that corresponded perfectly to the aristocratic pastime of hunting, a theme commonly depicted in the visual arts of the period.

A virtually identical clock with different birds on the cresting and a movement by Festeau was in the Roberto Polo collection, sold Sotheby's New York, 3 November 1989, lot 31, and an identical version to this model but with a patinated rather than gilt boar and movement by Sarton was sold Sotheby's Monaco, 25-26 June 1983, lot 85. Smaller casts of boar were used on musical clocks, including an example formerly in the Earls of Shelburne collection, sold Christie's London 9 December 2010, lot 256, and another very similar version illustrated in H. Ottomeyer and P. Pröschel, Vergoldete Bronzen: die Bronzearbeiten des Spätbarock und Klassizismus, Munich 1986, Vol. I. p.123 fig.2.8.4.

Pierre François Gille, known as Gille l'aîné (c.1690-1765), maître horloger in 1746, was based in the Rue Saint-Martin and provided clockworks to bronziers such as Osmond and Jean-Joseph de Saint-Germain, and for tall case clocks supplied leading ébénistes including Latz, Foullet and Marchand. He notably worked for the services of King August II of Saxony, Count Brühl, and the Prince de Condé