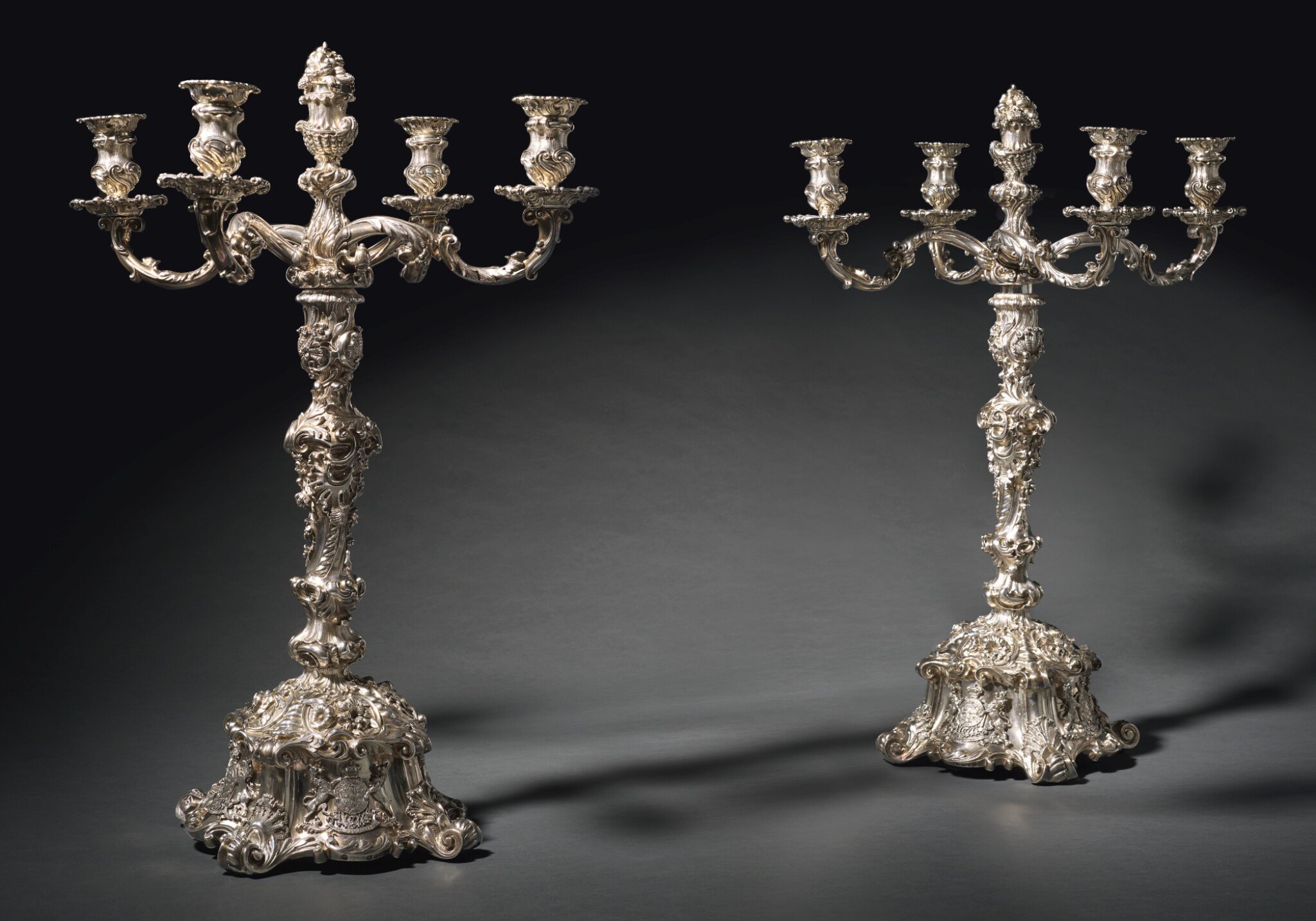 In overall excellent condition, one of the central fruit finials has a small dent around the interior rim, superior quality, good marks, heavy gauge and crisp decoration.

The arms are those of Henry William Paget, 1st Marquess of Anglesey, who was born in London on 17 May 1768, the son and heir of Henry Bayly (who assumed the name Paget in 1770), and his wife, Jane, daughter of the Very Rev. Arthur Champagné, Dean of Clonmachnoisie, Ireland. He, who was educated at Westminster School and Christchurch, Oxford, was MP for the Carnarvon boroughs from 1790 to 1796 and for Milborne Port from 1796 to 1804 and again from 1806 to 1810. Following his father's creation as Earl of Uxbridge in 1784 he was styled Lord Paget, after which, in 1790, he began his connection with the militia upon raising a regiment known as the 80th Foot or Staffordshire Volunteers. Following several promotions he served with distinction under the Duke of York and at Corunna under Sir John Moore. He succeeded as the Earl of Uxbridge upon the death of his father in 1812. Three years later he commanded the cavalry of the Anglo-Belgian army at the Battle of Waterloo where, upon being wounded by cannon shot his remark to the Duke of Wellington, 'By God, sir, I've lost my leg!' is supposed to have elicited the reply, 'By God, sir, so you have!'. In spite of his injury he was commended for his successful contribution and as a result of this heroic action he was shortly afterwards, on 4 July, rewarded by being created Marquess of Anglesey. He gained several further promotions, finally in 1846 being appointed Field Marshal. He meanwhile served under the Tory Government as Lord Lieut. of Ireland in 1827/28 but was recalled to London early the following year by the Duke of Wellington, then Prime Minister, for his sympathetic stance towards Catholic Emancipation in opposition to his party's agenda. Anglesey soon allied himself with the Whigs, however, under whom he returned to Ireland in 1830 where he served as Lord Lieut. until 1833.

The Marquess was married twice, first in 1795 to Caroline Elizabeth, third daughter of the 4th Earl of Jersey, by whom he had eight children. Following the dissolution of their partnership in 1810 he was married secondly, also in 1810, to his mistress, Charlotte, the divorced wife of Sir Henry Wellesley (afterwards Lord Cowley), by which action he caused a scandal and earned the disapproval of the Duke of Wellington. They had ten children together, of whom six survived infancy.

Described in The Complete Peerage as 'a brilliant, gallant cavalry officer, but neither a wise nor a virtuous man,' the Marquess of Anglesey's country residence was Plas Newydd, ancestral home of the Bayly family, on the island of Anglesey. His London mansion, Uxbridge House, stood in Burlington Gardens on the corner of Savile Row (Fig. 1). He died there at the age of 85 on 29 April 1854 and was buried with full honours a week later on 6 May in the family vault, Lichfield Cathedral.

Lord Anglesey's eccentric great-great grandson, Henry Cyril, 5th Marquess of Anglesey (1875-1905), an amateur actor whose extravagance of living and acquisition of a 'preposterous accumulation' of jewels and costumes, drained the Paget family fortune so effectively that he was declared bankrupt in 1904 with debts of £544,000. The fate of these candelabra at that time is not known but they subsequently changed hands in July 1946 for £458 4s 8d. This was remarkable because much late Georgian and early Victorian silver of this type and weight which appeared on the market in the 1940s and 1950s was destroyed.