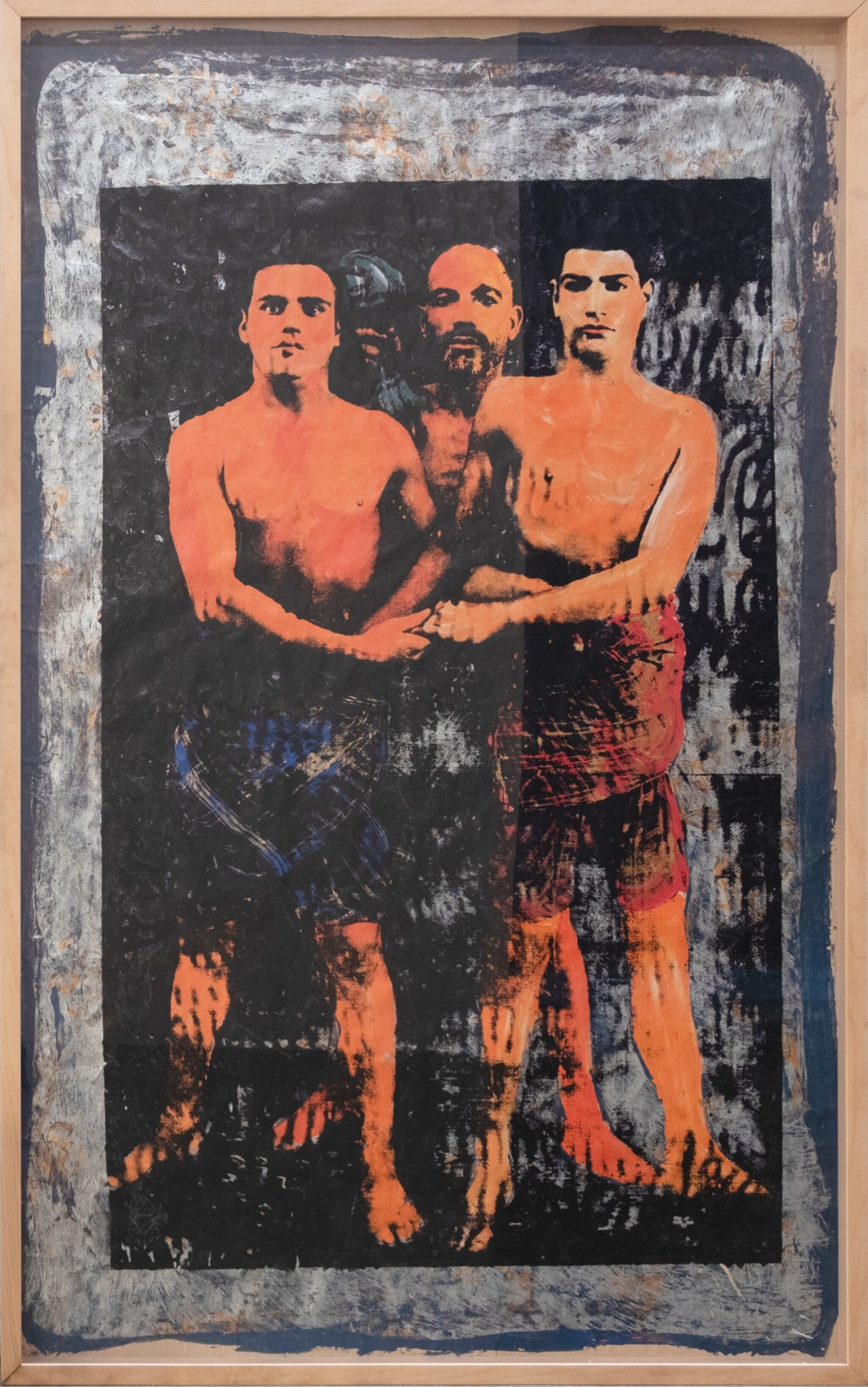 silkscreen and acrylic on paper

This work is unique.

Khosrow Hassanzadeh (b. 1963, Iran) is a painter, silk-screen printer and ceramist. He studied at the faculty of painting at Mojtama’s-e-Honar’s University in Tehran (1989-1990) and later trained with his mentor Aydeen Aghdashloo, while studying at the Faculty of Literature in Azad University, Tehran.

Returning from the Iran-Iraq war, Hassanzadeh decided to follow the path he had always dreamed of – art and poetry. Many of Hassanzadeh’s paintings and drawings can be seen as visual diaries, incorporating his own writings, his family, self-portraits and his experience of war. Hassanzadeh’s multi-layered work is underpinned by highly politicized undertones, however it is more concerned with the human than the political, as he himself asserts. In an article from 2004 in Frieze magazine entitled City Report on Tehran, Tirdad Zolghadr writes, “Not everyone sees the Islamic Revolution as a disadvantage for the arts. Painter Khosrow Hassanzadeh has a biography so dramatic and allegorical it is bound to satisfy any post-colonial enthusiast: from Islamic militant and war soldier to fruit bazaar vendor to an international career in the arts.” Hassanzadeh rapidly became one of Iran’s leading contemporary artists in the 90s.

Pahlavans is a spectacularly strong series of silkscreen and acrylic on paper, Khosrow Hassanzadeh examines popular traditions, and more particularly ‘Pahlavans’, the historic Iranian wrestlers noted for their virtue and courage, and who protected their communities. He bases the series on old historic photographs of Pahlavans that he found in photography shops in south Tehran. He then turns them into seductive pop psychedelia portraits.

Hassanzadeh first gained international recognition in 1999 when his War series was exhibited at the Old Diorama Arts Centre in London, curated by Rose Issa.

In 2006, he presented his first retrospective in the Tropenmuseum in Amsterdam. He has taken part in several group exhibitions, including, The Jameel Prize 2009, Victoria and Albert Museum, London (2009); Iran Inside Out, Chelsea Art Museum (2009); Word into Art: Artists of the Modern Middle East, British Museum, London (2006); Far Near Distance: Contemporary Positions of Iranian Artists, House of World Cultures, Berlin (2004). His work was also included in the 53rd Venice Biennale as part of the exhibition East-West Divan: Contemporary Art from Afghanistan, Iran and Pakistan (2009).