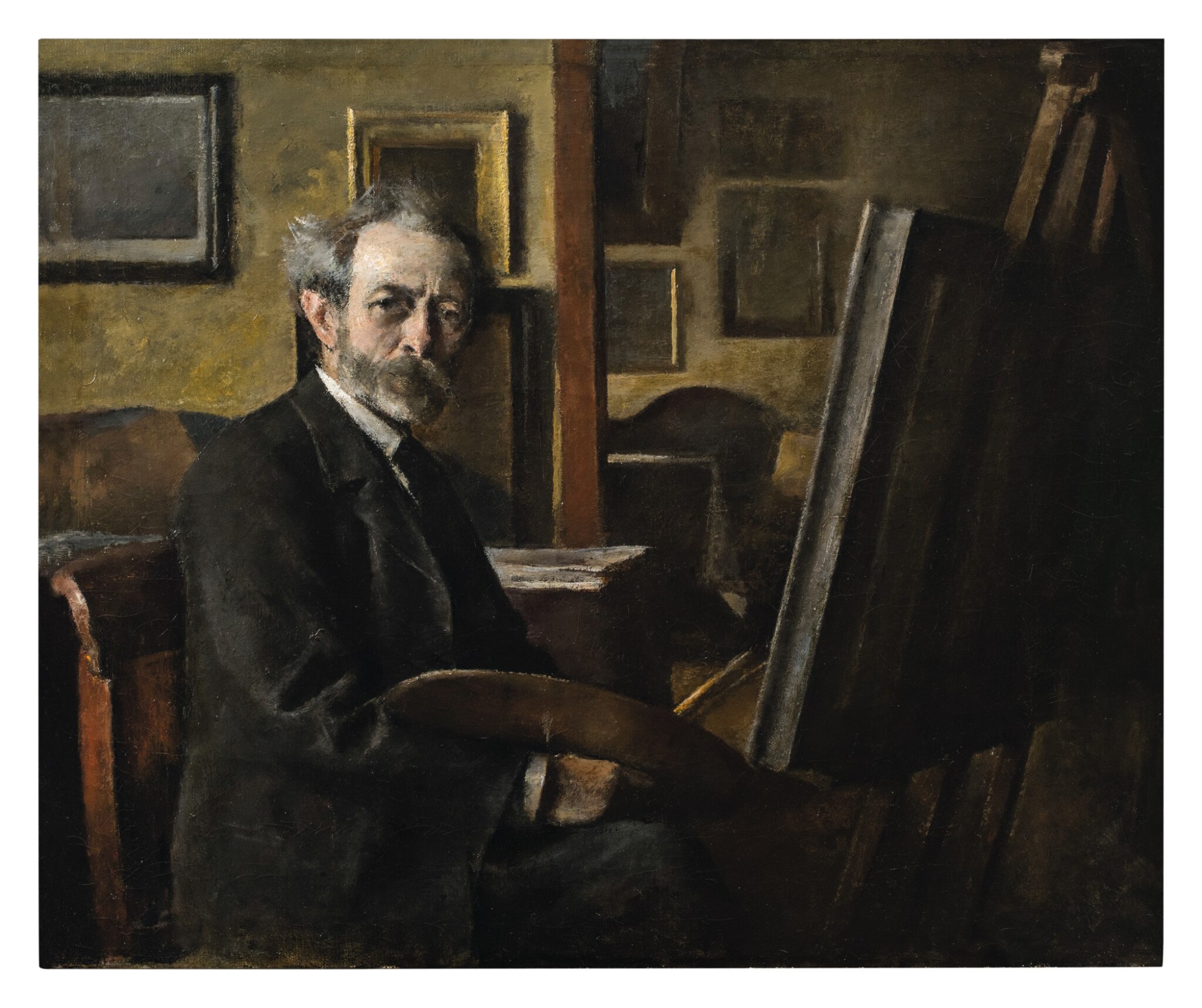 This painting is in very fresh and overall untouched state. The canvas is unlined, although the edges have been strip lined to secure it on what appears to be its original stretcher. The paint on the surface is applied with a "crusty" technique, which is well preserved. There is some slight craquelure visible, typical of an unlined canvas. This is, however, not distracting in any way. Under UV: There are a few scattered tiny touches addressing extremely small and localized issues. Offered in a modern dark molded frame.

"The history of self-portraits in the Western tradition is rich and varied. There is perhaps no better way to cut to the heart of an artist’s intention and message than to see the way they chose to portray themselves. From Van Eyck to Dürer, Rembrandt, Van Gogh and Freud, self-portraits very often become the enduring images from an artist’s career. Schou’s own self-portrait is piercing. He is seemingly towards the end of his career and, as his biography attests, burdened with personal struggles that are hinted at here. He is serious, scholarly, and accomplished—all as he wishes to be seen."

Born in 1844 in Copenhagen, Peter Alfred Schou was interested in art from a young age. Despite his love of painting, he chose to attend trade school, following his father into the family business. He spent much of his life in Hamburg, where he moved in 1865 to supervise his business’s affairs. While here, he traveled extensively throughout Germany and Scandinavia, and subsequently fell in love with Felicia Griffé, a French woman he met in Stockholm. The happy years of Schou’s youth came to an end in 1867 when his brother, the painter Ludvig Abelin Schou (1838-1867), died from cholera while painting in Florence at the age of twenty-nine. A second blow arrived two years later, when Griffé also died prematurely. It was likely these immense losses that spurred Schou’s decision to finally pursue his long-standing passion for painting.

Schou began his formal artistic training in 1873 at the Academy of Fine Art in Dresden. In 1875 he moved to Paris, where he studied under Théobold Chartran, the famed Vanity Fair caricaturist, and later under Léon Bonnat from 1879-1880. Schou exhibited at the Paris Salon for the first time in 1880, returning to Hamburg the year after. It was in Paris, however, that he connected with some of his most important and influential Danish contacts, most notably the painter and future art critic Karl Madsen (1855-1938) and his mentor, the poet and Skagen painter Holger Drachmann (1846-1908).

Collectors in Schou’s native Denmark did not immediately take to his work. He likely remained in Hamburg for so long because his 1882 submission to the Charlottenborg Spring Exhibition was rejected by the censorship committee. A defeated Schou returned to Germany and founded his own venue called the Aktclub, where artists could paint and exhibit without the academic rigidity that he felt had spited him in Copenhagen. Schou’s work was better received after his later homecoming in 1898. After his first exhibition in 1902, he continued to exhibit frequently in Denmark, as well as in other European countries including England and Sweden. He went on to earn the Royal Danish Academy of Fine Art’s Eckersberg Medal two times, in 1908 and 1912, and in 1911 he was awarded Det Anckerske Legat, a grant given to outstanding artists, composers and writers to fund travel abroad. After his death in 1914, the artist’s notable career was honored with a memorial exhibition, fittingly held at the Charlottenborg.

The present self portrait was likely painted around 1900, after Schou had returned to Copenhagen from Hamburg. It epitomizes his talent for capturing moments of quietude in atmospheric interiors. Soft light is created by a palette of browns, deep ochers and rust tones, which contrasts gently against the figure’s pale skin. Schou depicted himself in a black suit and tie, a comparatively formal presentation to other self portraits, in which he dons an artist’s smock (fig. 1). He looks out with stoic intensity, his wrinkles and grayed hair signifying a man of experience and pride. Intriguingly, Schou does not capture himself while working. Instead his brush is at rest, as if he is considering his reflection with a greater intent than simply painting its likeness.