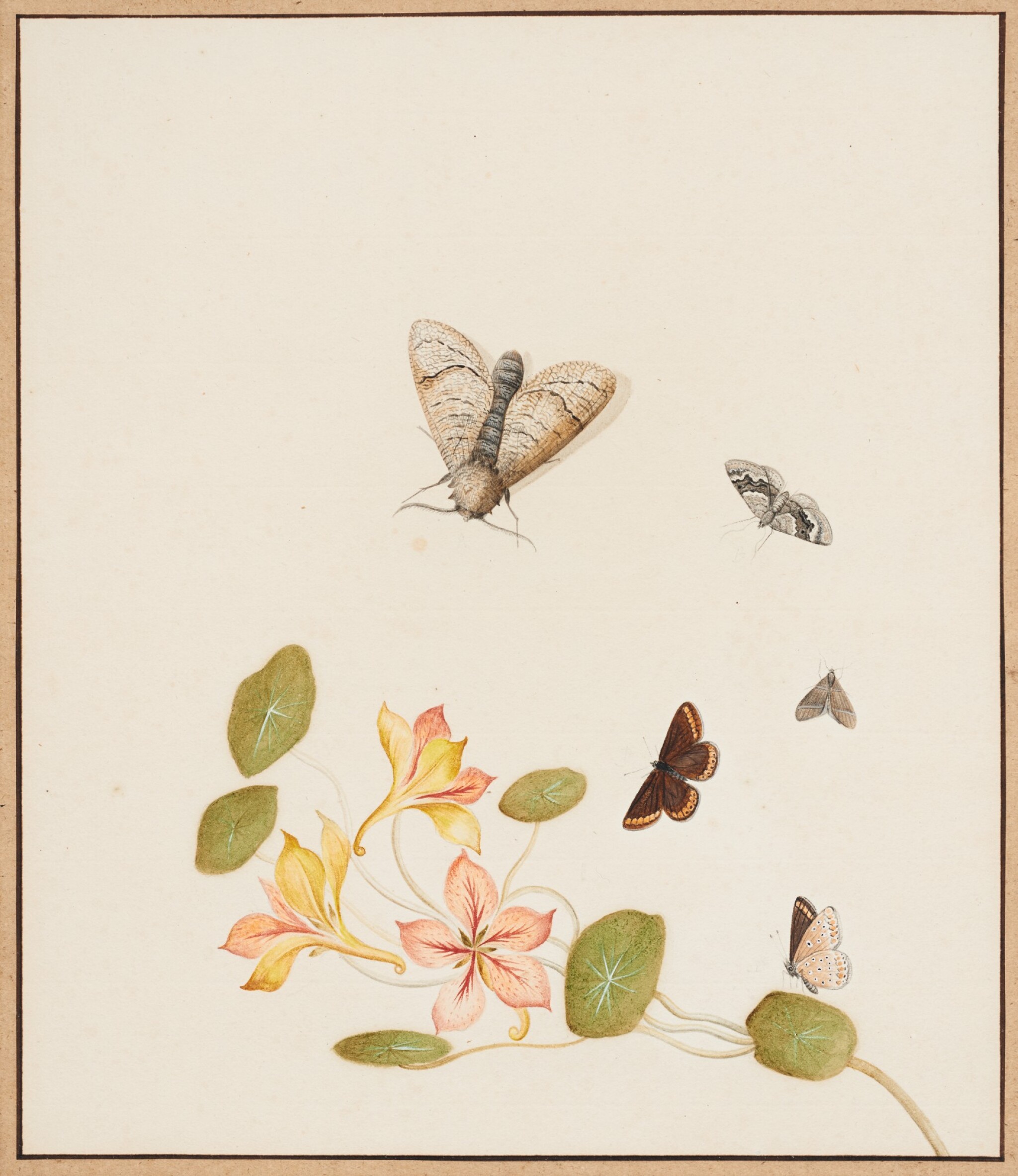 GOLDEN COLUMBINE WITH BUTTERFLIES AND MOTHS

Laid down on an old decorative mount which has in turn been hinged to a modern cream mount. There are a couple of very slight light brown stains to the sheet, however the work remains in otherwise very good condition throughout, with the combination of media fresh and vibrant and the image strong. Sold in a modern giltwood frame.

The estate of the artist,

"17th-century Holland witnessed an unprecedented desire to understand, rationalise, categorise and describe the natural world. Born into this incessantly inquisitive milieu, Nicolaas Struyk devoted his life to mathematical theory, and to the description and classification of plants and insects. This accomplished watercolour shows, however, that a work made primarily as a scientific record can also be an artwork of great beauty and refinement."

Little is known about the famous Dutch mathematician and comet hunter Nicolaas Struyk’s childhood and education.1 He was born on 21 May 1686, in Amsterdam, as the second son of the goldsmith Nicolaas Struyk Nicolaaszoon and Geertruy Wesdorp, faithful members of the Lutheran church. As a little boy he went out with his father catching butterflies and collected specimens on a modest scale. Later in life he wrote that "formerly insects were my favorite pastime".2 Never married, Struyk died in 1769 in his hometown. On July 10th-11th, an auction at Struyk’s home on the Agterburgwal took place, including insect drawings. Struyk’s early interest in natural history soon turned into a passion for mathematics and astronomy. While Struyk no longer chased butterflies, he devoted his time to collecting empirical data, with the aim of discovering lawlike patterns. This development was less strange than it may seem now. The collections of curiosities and naturalia in Dutch cabinets of the seventeenth and early eighteenth centuries were after all a small-scale reflection of the world as a whole. Struyk started his mathematical work around 1712, when he was 26 years old. When Isaac Newton’s (1643-1727) illicit Principia was first published in Amsterdam in 1714, astronomical mechanics and the concept of gravitation gained ground in the Dutch Republic and triggered Struyk’s lifelong interest in the orbits of comets. In his Uytreekening der kanssen in het speelen published in 1716, Struyk set out his ideas on the calculation of chances in gambling, probability calculus as it is still applied today. The many references to books and papers in foreign journals show that he read profusely and corresponded with colleagues in many countries. However, since his books were published in Dutch, Struyk never quite received international recognition. Struyk’s magnus opus Inleiding (Introduction) from 1740, reveals the origins of his entomophilia. Larger animals are well studied throughout history; it is in the overlooked small critters that the wisdom of the Creator is revealed. Struyk was proud to have identified 531 different species of butterflies and their natural habitat, explaining the importance of worms and grasshoppers, concluding that scientists will need centuries to identify and study all small beings.3

In order to gather all this information, Struyk studied the natural history cabinets of Jacob ten Cate and Albertus Seba (1665-1736); the latter of whom was a Dutch pharmacist, zoologist and collector.4 Born in East-Frisia, Seba moved to Amsterdam and opened a pharmacy near the harbor around 1700. There he called on sailors and ship surgeons to bring exotic plants and animal products he could use for preparing medicine. Seba also amassed snakes, birds, insects, shells, and lizards in his home, bought or traded with the sailors, who were often desperate for any kind of curative. From 1711 on, Seba delivered medicines to the Russian court in Saint Petersburg, sometimes accepting fresh ginger as payment. Seba promoted his treasures to the Tsar, eventually selling his entire collection to Peter the Great (1672-1725) in 1716.5 Struyk’s drawings could well be the only pictorial record of Seba’s first cabinet.

Struyk assembled at least six substantial folios. One of the albums, dated 1709, contained seventy drawings of butterflies and other insects drawn from nature.6 A book with local insect drawings, Vertooning der Inlandsche Insecten, dated 1715, measured 240 by 192 mm, of which the title page recently appeared on the market.7 Verschyden Uytlansche Insecten, dated 1719, a larger format album, measuring 447 by 280 mm, of foreign insects compiled by Struyk, are now dispersed as well.8 The present Golden Columbine with butterflies and moths plausibly originated from the 1715 album.

5. Seven months later seventeen trunks arrived in Russia. With Seba as an intermediate, Frederik Ruysch, a famous botanist, also sold his collection to the tsar. A special building was designed, and from 1728 till 1830 both collections were exposed in the Kunstkammer in St Petersburg.