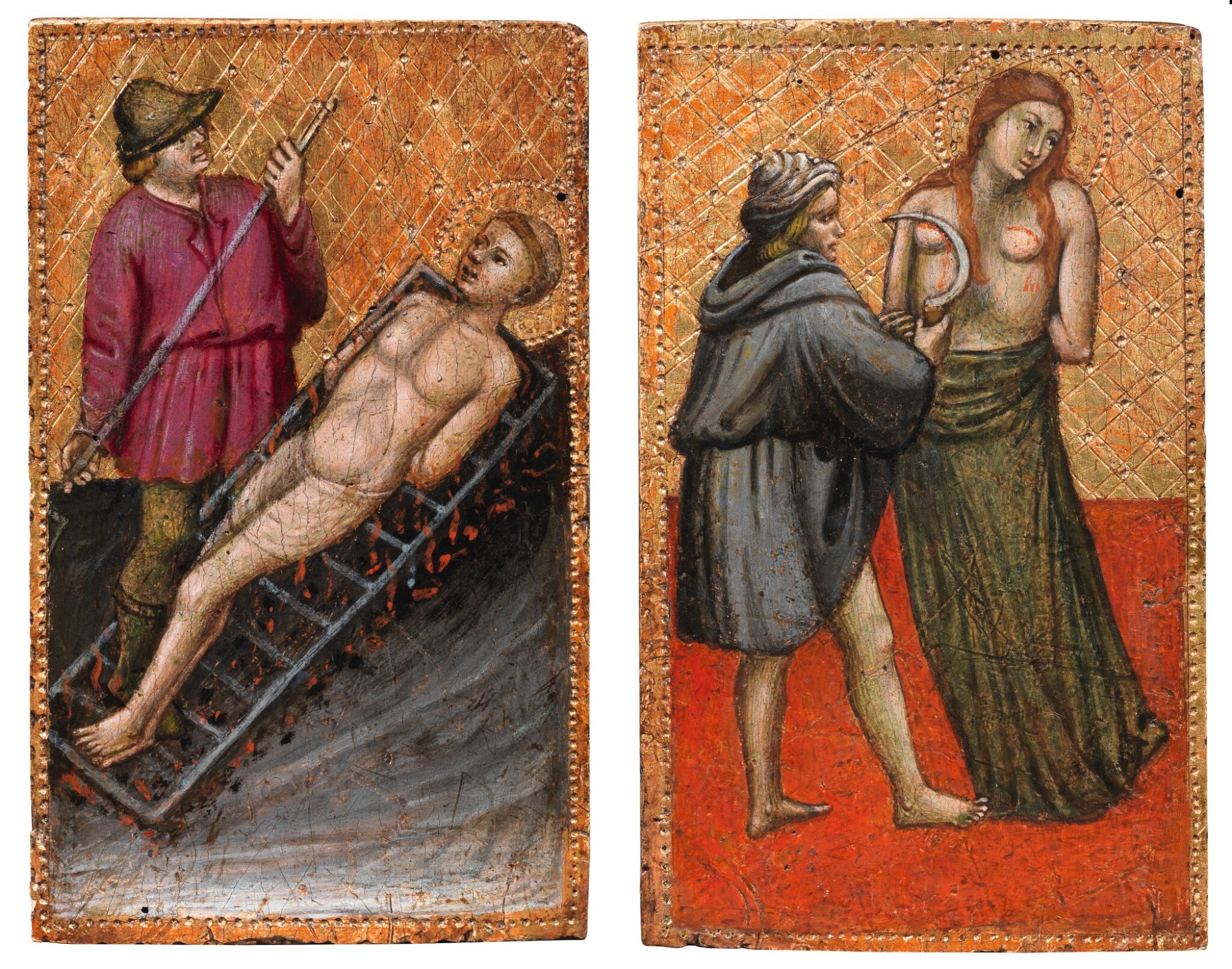 a pair, both tempera on panel, gold ground, unframed

Both small gold ground panels are without cradling on the reverse. They each have a very slight vertical bow but are stable. Their paint layers are stable with good coloration and retention of paint. UV light reveals a few very small scattered retouches in the drapery of the figures in both works, but these are cosmetic and not to fix any structural or large losses. The paintings could be hung in their current condition. They are offered unframed.

"While not as familiar to most people as their counterparts in Florence and Siena, the early painters of the Bolognese school are amongst the most intriguing artists working in the late 14th and early 15th Century. They often exhibit a special talent for colorful narrative; these Saints Agatha and Lawrence are good examples of this. They are intimate objects, to fit in the palm of your hand, but powerful in their content and luxurious in their use of color and refined punch work."

Dr. Mauro Minardi, to whom we are grateful, first proposed the attribution of this pair of paintings to Orazio di Jacopo. Orazio was the son of Jacopo di Paolo (c. 1345/7 – 1429/30) and was documented mainly as a painter and decorator of banners, flagpoles, flags, and coats of arms. A few dated altarpieces are recorded in historical sources but have not survived, and his production is completely unknown until after 1430. This pair of martyr panels likely date to the 1440s and were once part of a diptych or triptych, based on their vertical wood grain.

According to Minardi, these images are “emblematic of the bizarre and highly articulated expressive world of Bolognese painting of the late Middle Ages.” The martyrdom scenes are at once gruesome and whimsical. The figures’ costumes also reflect 15th century Bolognese style; in particular the hat with peaked visor and double-lapeled coat worn by the tormentor in the St. Lawrence panel, and the turban worn by the tormentor of St. Agatha all appear in contemporary Bolognese religious painting. Orazio di Jacopo’s style bridges the gap between the “neo-Giottesque” painting of his father’s generation and the new generation of Bolognese painters. His three sons, Policleto, Guilio, and Gentile, also became painters.

All proceeds to be donated to ChefsForAmerica COVID –19 Response, a subsidiary of Chef José Andrés’ World Central Kitchen, a relief effort to feed people who are victims of the financial strains due to the coronavirus. To donate, please go to https://wck.org/