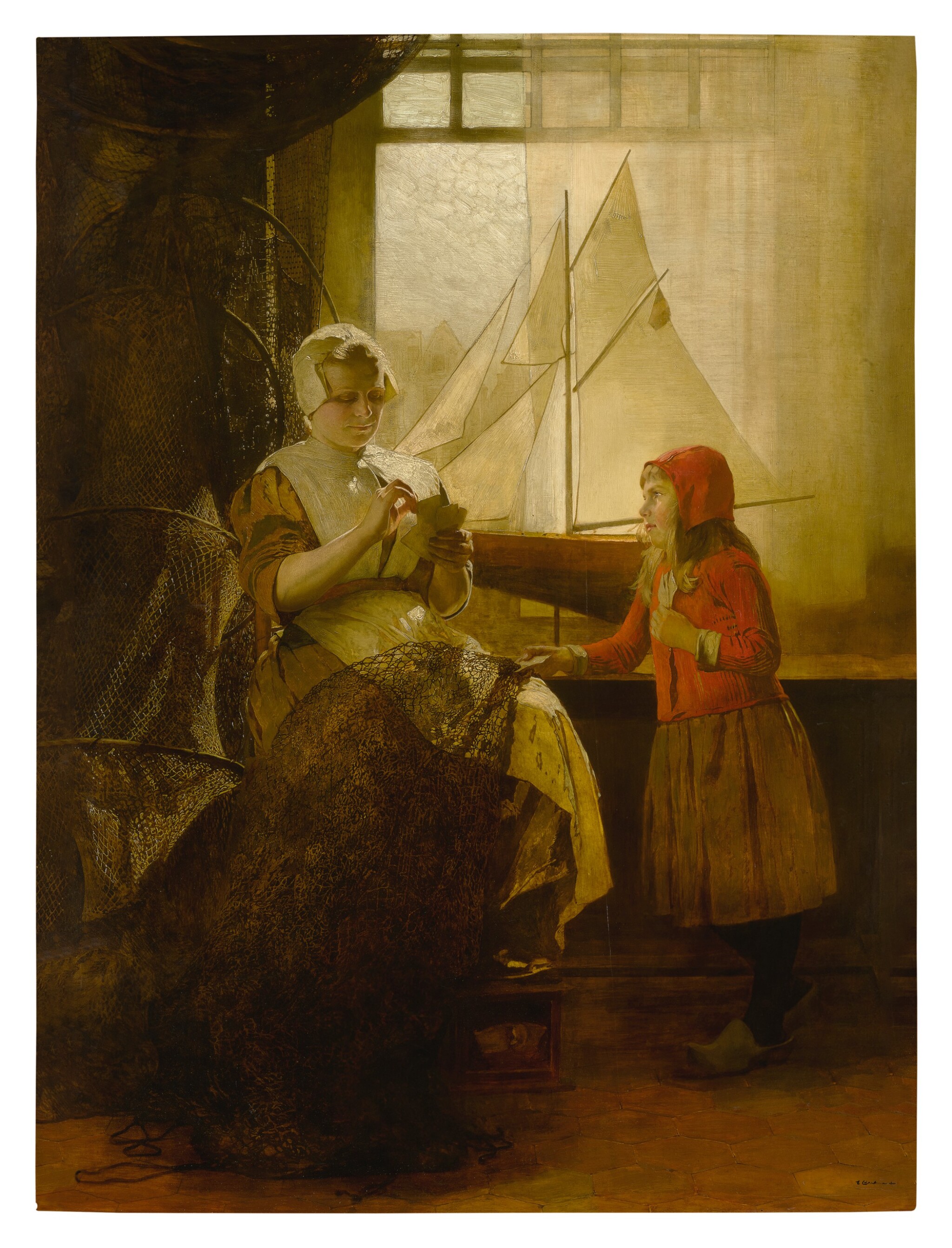 The painting is executed on a large panel comprised of two boards brought together by a single vertical join. The panel has three horizontal battens inset into the panel, and there is a slight vertical bow in the overall panel. Overall the painting is in lovely condition, with rich impasto throughout and a delicate golden light that washes over the entire composition. UV light reveals only a couple very small retouches along the panel join. There are some minor small retouches in the background and there may also be strengthening in the cheeks of the seated figure. Overall, though, the picture is in fine condition. In a carved wooden frame.

"At first glance this scene might be mistaken for a seventeenth-century Dutch genre painting, in the manner of Pieter de Hooch. The intimate domestic setting with the interaction of mother and child was a specialty of De Hooch, although the fish net and model ship before the window might strike one as incongruent for a Dutch golden age picture. What also sets this painting apart from such precedents is the relatively large scale on which it is painted: it stands over four feet tall without the frame. For me it strikes a perfect balance between intimacy and monumentality."

Eduard Charlemont (1848 – Vienna – 1906) was the son of the painter Matthias Adolf Charlemont, the brother of Hugo a painter and engraver and Theodor a sculptor. By 1863 Eduard was already a drawing instructor at a girls’ secondary school. He studied at the Vienna Academy under Eduard Engerth and by 1870 had importantly entered the atelier of Hans Makart. Makart further encouraged him to complete his studies in Italy and particularly Venice, with later travels to Germany. Charlemont would eventually settle in Paris for thirty years and achieve great success. He exhibited in the Paris Salons and in 1878 received an honorable mention, a third class medal in 1885 as well as a bronze medal at the Exposition Universelle of 1900. He was made a Chevalier of the Legion of Honor in 1895. His works became much sought after and was especially renowned for his portraits, particularly those of children. He executed genre subjects that emulated the styles of Pieter de Hooch, Frans van Mieris, Johannes Vermeer and Jean Louis Ernest Meissonier, all of whom he idolized. He was equally famous for executing large paintings and murals. He completed three massive ceiling paintings for the Burg Theater in Vienna. Other works by the artist are in the Wien Museum, Vienna, The Philadelphia Museum of Art and the Oblastní Galerie V. Liberci, Liberec, Czech Republic. Charlemont’s works overall are highly imaginative compositions mixed with wit and charm, executed with great skill and elegance, which reveal a facile handling of paint that render exquisite details and brilliant colors.1 The Card Game is an excellent example of Charlemont’s oeuvre. Painted on panel and in marvelous condition, this painting of a Dutch fisherwoman and her child illustrates the artist’s technical skill and creative ability. The subject of peaceful domesticity also reflects Charlemont’s debt to Dutch genre painting of the seventeenth century.